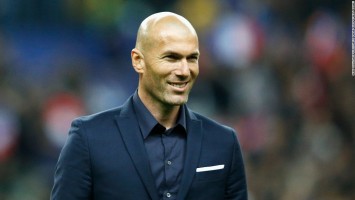 Zinedine Yazid Zidane born 23 June 1972), nicknamed "Zizou", is a French retired footballer and current manager of Real Madrid. He played as an attacking midfielder for the France national team, Cannes, Bordeaux, Juventus and Real Madrid. Renowned for his elegance, vision, ball control and technique, Zidane was named the best European footballer of the past 50 years in the UEFA Golden Jubilee Poll. He is widely regarded as one of the greatest players in the history of the game.

At club level, Zidane won the La Liga title and the UEFA Champions League with Real Madrid, two Serie A league championships with Juventus and an Intercontinental Cup and a UEFA Super Cup each with both aforementioned teams. His 2001 transfer from Juventus to Real Madrid set a world record fee of an equivalent €75 million. His left-foot volleyed winner in the 2002 UEFA Champions League Final is considered to be one of the greatest goals in the competition's history. On the international stage with France, Zidane won the 1998 FIFA World Cup, scoring twice in the final, and UEFA Euro 2000 where he was named Player of the Tournament. The World Cup triumph made him a national hero in France, and he received the Légion d'honneur in 1998.

After retirement, Zidane became assistant coach at Real Madrid under Carlo Ancelotti for the 2013–14 season. After a successful year in which the club won the UEFA Champions League and Copa del Rey, Zidane became the coach of Real Madrid's B team, Real Madrid Castilla. In 2010, Zidane was an ambassador for Qatar's successful bid to stage the 2022 FIFA World Cup, the first Arab country to host the tournament.