Hansi Flick will make his debut as the head coach of Bayern Munich in this weekend’s mega clash.

In the Bundesliga Matchday 12 Preview, the stage is set for a truly memorable ‘Klassiker’ between FC Bayern München and Borussia Dortmund.

The first ‘Klassiker’ of this season marks the latest chapter of what has been an incredibly exciting title race so far, with goal scoring records being broken and several challengers persisting at the top of the table. Hosted in Munich’s Allianz Arena, this game could be a defining moment for either of these title chasers.

This clash is the perfect example of ‘Football as it’s meant to be’. Fast, modern football, a packed stadium, international stars and wonder kids, plus two truly unique clubs – this fixture has it all.

“It’s an important match. We are coming up against one of our direct rivals for the title, and it’s also an important match for the fans. We must win. It’s always a difficult match, but we tend to win at home against them,” said Bayern star Kingsley Coman in an interview.

“The Supercup was not good but I am convinced that we will put in a good performance. I am still confident.”

“It is an important match, so I hope that I will be able to score. I hope to be decisive and hope that everyone has a good game as well,” he added while speaking about the big game in the Bundesliga Matchday 12 Preview. With both teams separated by only one point in the Bundesliga table, this week’s match is reminis- cent of last season. Then Bayern won 5-0 to take over the lead from Dortmund on matchday 28, a result that proved decisive in their surge towards to title. Since then, Dortmund took revenge, beating Bayern 2-0 at home in the 2019 Supercup.

This weekend Bayern will be in the spotlight after recent run of poor form, climaxing in a 5-1 loss against Eintracht Frankfurt which led to coach Niko Kovac leaving his position. For the upcoming ‘Klassiker’, former assistant coach Hansi Flick will take charge and faces one of the league’s toughest challenges.

Following their 3-0 victory over VFL Wolfsburg, Dortmund is back within striking distance of top spot, in second place, but remains three points behind leaders Borussia Mönchengladbach.

With as many as four clubs only a point apart, Dortmund will have to give it their all against Bayern, not only for the prestige of winning this world-famous derby, but also to maintain their ambitions of lifting this year’s title.

Erstwhile, it’s Favre’s former club, the other Borussia – Mönchengladbach – who lead the Bundesliga table, three points clear after a sizzling start under Marco Rose. Their comfortable cushion came courtesy of a Rhine derby success at Bayer 04 Leverkusen last time out inspired by summer arrival Marcus Thuram, whose five goals and four assists over the last six matchdays have made him the division’s most dangerous opponent. 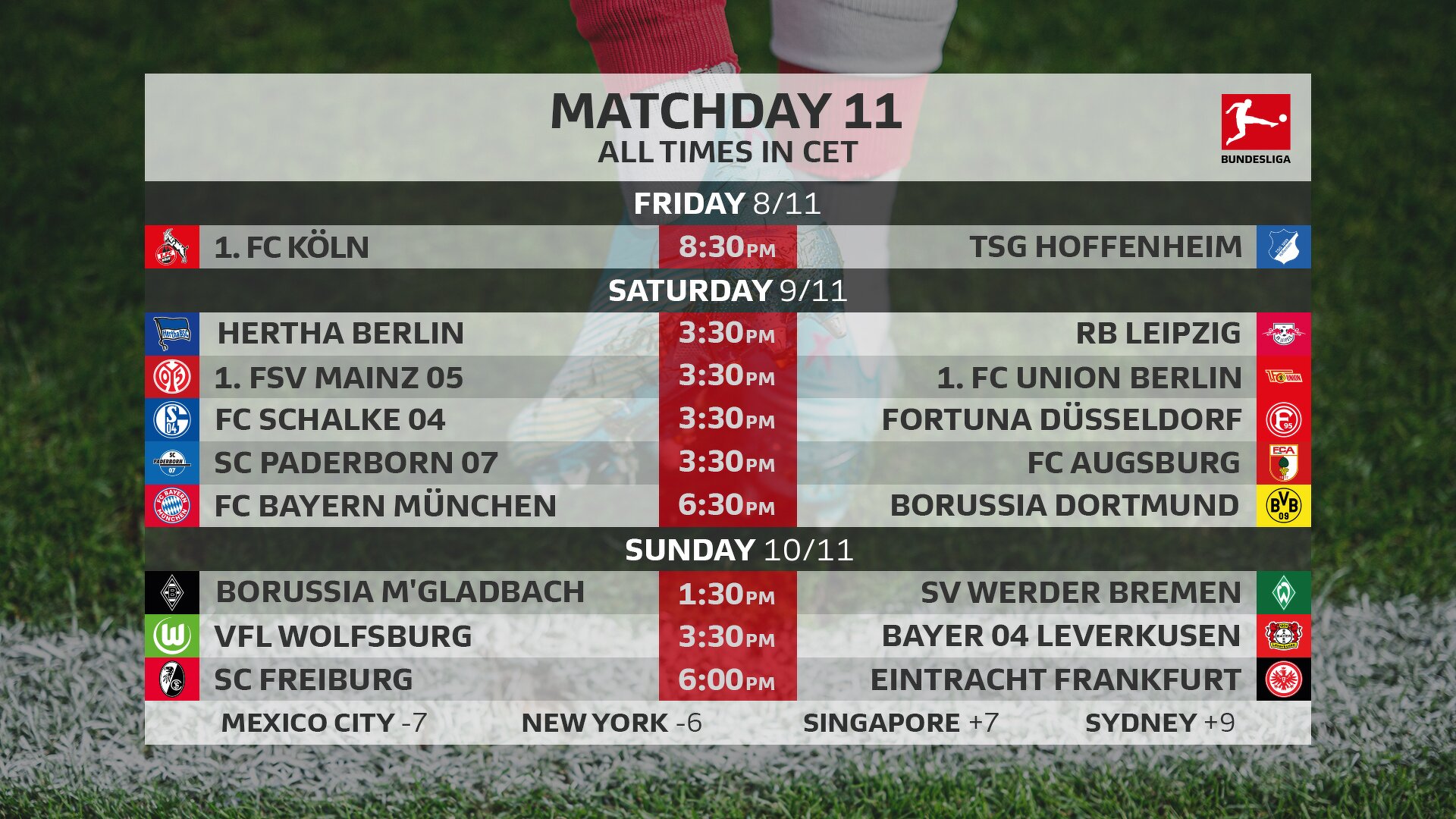 Christian Streich’s fifth-placed team face a stiff test in the Bundesliga Matchday 12 Preview when they welcome Eintracht Frankfurt to the Black Forest in Sunday’s Matchday 11 finale. Frankfurt head into the weekend in seventh place, but only two points off second. If Adi Hütter’s men can bounce happily on the momentum built by their 5-1 thumping of Bayern last weekend – a defeat that cost Niko Kovac his job – they will be challenging third-placed RB Leipzig for a place on the podium.

Julian Nagelsmann’s side were even bigger scorers on Matchday 10, dishing out an 8-0 schooling to 1. FSV Mainz 05 to record their biggest ever Bundesliga triumph. In-form Timo Werner netted a hat-trick and assisted another three goals in a virtuoso display central to his club snapping a four-game losing streak. Leipzig’s hosts this week, Hertha Berlin, have been warned!

Analysis: Why Jamal Musiala and Florian Wirtz are the next big thing in Bundesliga

Yet, the Der Klassiker remains the highlight of the Bundesliga Matchday 12 Preview. The action is not limited to the Allianz Arena however. Across the world there will be more than 80 watch parties hosted, with over 30 events hosted in North America alone.

Elsewhere in the world, FC Bayern Brazilian legend Giovane Élber will entertain over 200 fans expected to turn out at an event in Guangzhou, China whilst former Dortmund star Jan Koller will be in Japan. His former team mate, Patrick Owomoyela will be in Kochi, India whilst FC Bayern great, Klaus Augenthaler, will be in Bangkok, supporting the Bundesliga’s official Thai broadcaster during the live match.