It was a game to forget for the Blue Tigers as they largely stumbled to individual mistakes.

The Blue Tigers were held by a sturdy Bangladeshi side 1-1 at the Salt Lake stadium. The stage was set for Igor Stimac’s men to grab all three points to follow up the majestic away performance against Qatar, but the men in blue failed to take their chances.

It was Bangladesh who struck first through a set-piece as Saad Uddin capitalized from Gurpreet Singh’s fumble. India came back with a late equaliser when Adil Khan scored from a Brandon Fernandes’ corner. This result keeps India win-less in the FIFA World Cup 2022 Qualifiers.

Let’s have a look into India vs Bangladesh Player Ratings.

A rare mistake from the big man costed India dearly as his weak effort to fist away the ball fell nicely for Saad to open the scoring. He was very tentative and was a shadow of his usual self.

Bheke looked shaky in defence for the entirety of the game as he was slowly emerging as the weak link for the Blue Tigers in defence. The Bengaluru FC man lacked confidence as he will look to bounce back soon.

The experienced defender made his return to the national team after a long injury layoff. However, he looked rusty and reacted slowly to dicey situations. He was subbed off in the second half for Chhangte.

Adil was the only defender who was reliable and came up with a goal-line clearance. He also went up and scored the equaliser on the other half of the pitch. He was rightly adjudged as the man of the match. 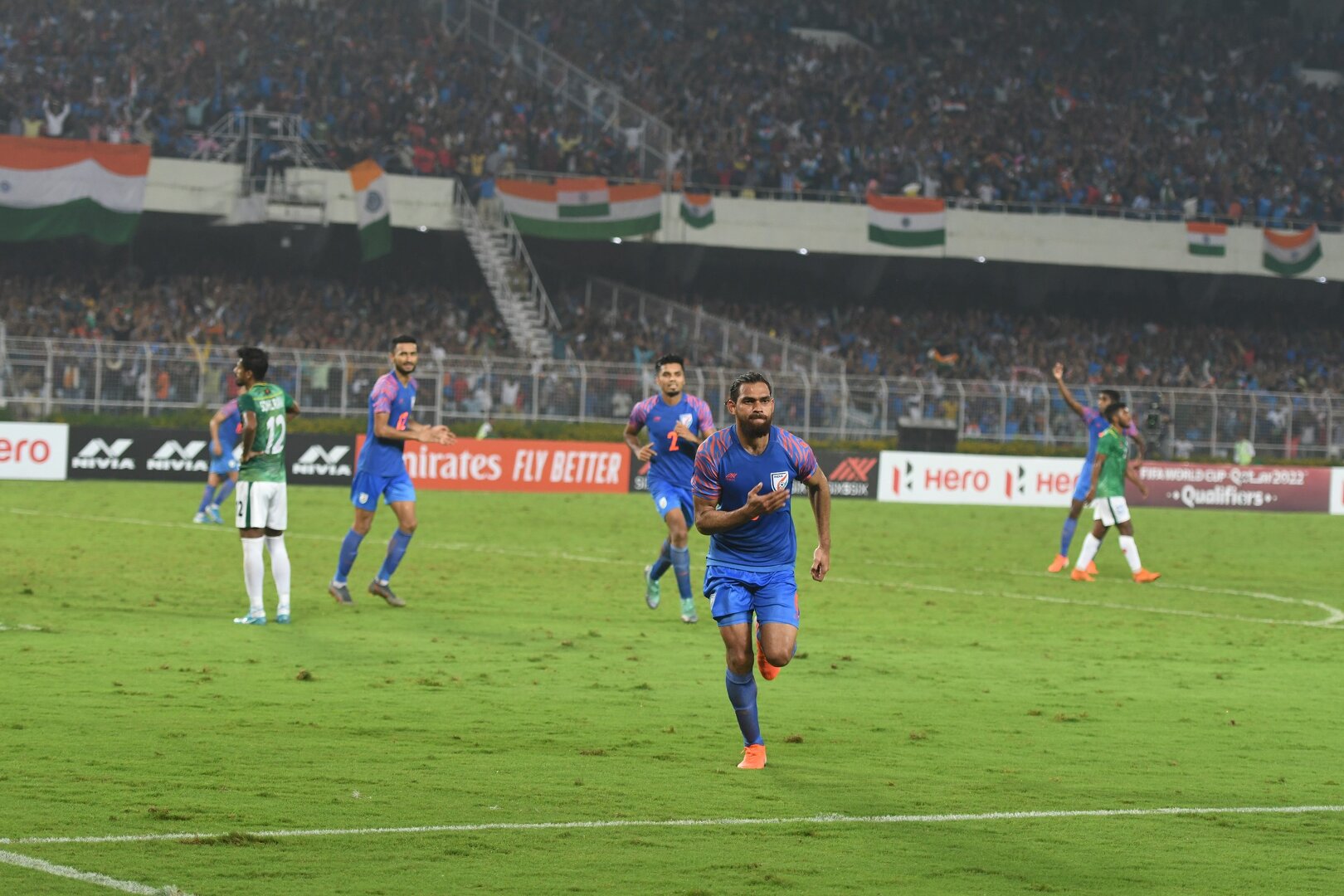 The FC Goa man started brightly teaming up with Ashique on the left flank. However, as the game progressed Mandar faded out of the game as Mohammad Ibrahim kept him busy keeping his attacking impact from the game.

Sahal hardly had any impact in the first half. He was closed down with urgency in midfield and was not allowed any space in the heart of the field.

Thapa had an off day at the office as he was played in an uncharacteristic holding midfield role. He was dominated by Bhuyan and Rana in midfield and failed to supply the ball to his forwards.

The Bengaluru FC winger used his lightning pace to get in behind the opposition defenders. However, his crosses were easily cleared away by a sturdy defence.

The Bengaluru FC man started brightly but faded away as the game went on. He was way too predictable by drifting wide and pouring in those crosses. He was shifted to a left-back role later and Ashique did well in an alien position.

The Indian captain was not in his best form as he was tightly marked by the Bangladeshi defenders. Chhetri still managed to create some chances but hardly had anyone to support him.

A lot was expected from Manvir Singh after the Qatar game but the striker from Punjab failed to live up to his expectations. He was used as a target man up-front.

The energetic winger was brought in the game to make a difference. Chhangte replaced Anas as Stimac decided to go all out for the win. However, the youngster failed to make a noteworthy impact.

The Mumbai City FC midfielder was brought in the second half to control things in the midfield for the Blue Tigers. He did a decent job in restricting the Bangladeshi midfielders and helped in India’s late attacking onslaught.

It was from his corner, Adil Khan scored and equalised for India. He had a good short-run in this game and could have made a bigger difference if he would have started.

Analysis: Are FC Goa ready to compete with Asia’s best?

Ashraful was kept busy in the first half but the only meaningful save he made was right after the half-hour mark keeping out a Manvir Singh header from a long throw. He maintained his consistency and kept out a strong long shot from Sahal.

The pillar in Bangladesh defence, Khan thwarted the Indian attackers time and again. He stood tall and cleared multiple crosses from Udanta Singh on the right flank. 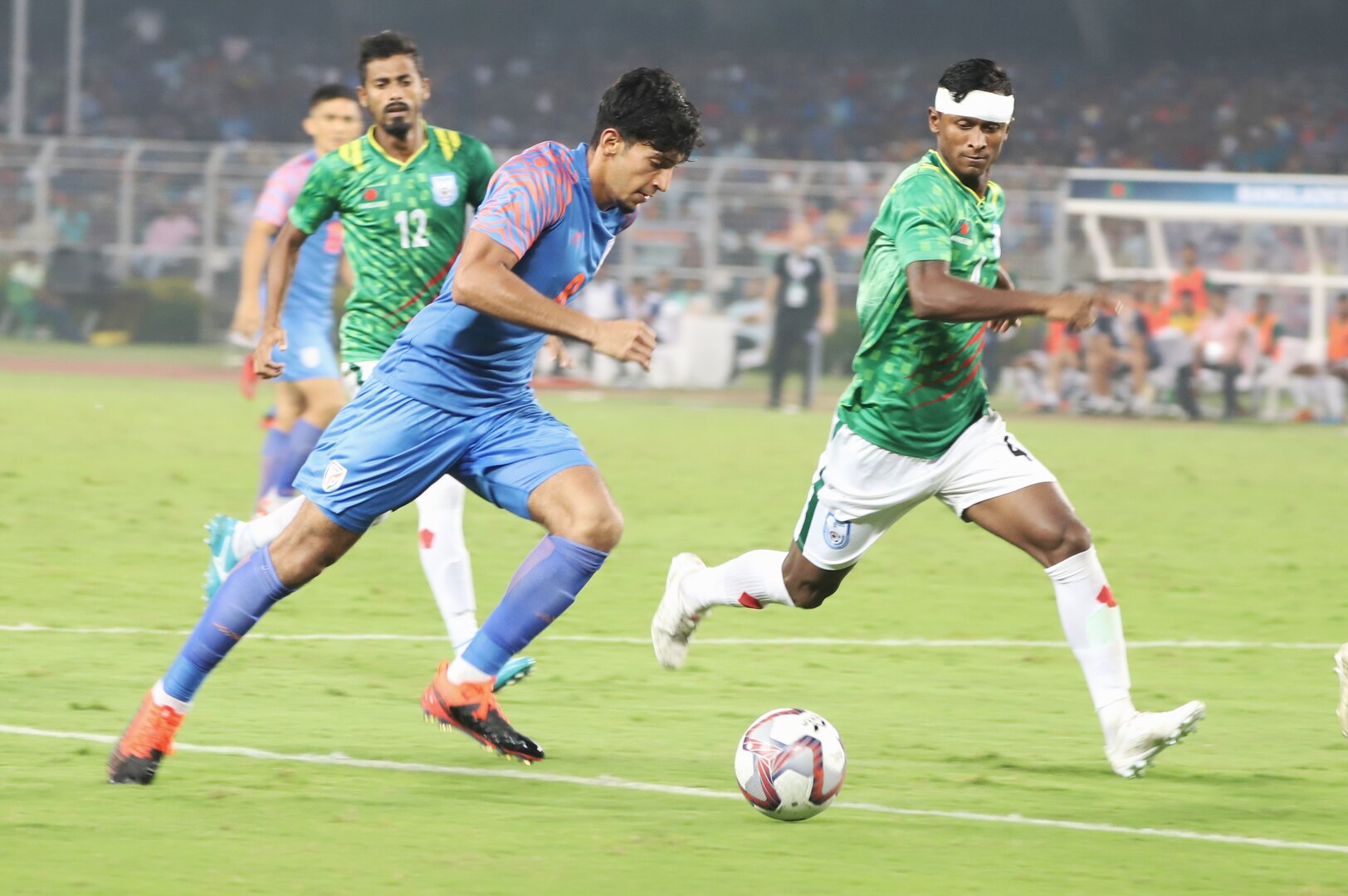 Rahmat held his lines really well and did not allow the Indian attackers any space. He was pushed back by Udanta time and again but he did a commendable job in not allowing space in the final third.

Riyadul supported Yeasin really well and cleared the lines whenever there was danger arising. He also overpowered the Indian players from set-pieces and kept the shape really well along with the other defenders.

Rayhan had an opportunity to trouble the Indian defence with his iconic long throws but it was cleared out by Anas Edathodika. In defence, the right-back was kept on his toes by Ashique Kuruniyan throughout the first half.

The captain of the Bangla Tigers led his men really well. He marshalled the midfield and did not allow any space for the likes of Thapa and Sahal to control the game. It was from his freekick Bangladesh opened the scoring.

Rana supported Bhuyan really well and simply kept Thapa and Sahal out of the game. The Indian midfield was not allowed to play their natural game and both Bhuyan and Rana made a huge difference in it.

Ibrahim worked tirelessly throughout the game, he was very potent on the counter-attack and also carried out his defensive duties with aplomb. He came up with a stunning goal-line clearance to Manvir Singh from scoring.

Just like Ibrahim, Biplo was also tireless in his approach as his main focus was on his defensive duties. In attack, he carried the ball forward with intent

The man of the first half for the Bangla Tigers, as the forward was in the right position to head in the weak fist from Gurpreet from a Jamal Bhuyan freekick.

The only Bangladeshi player who did not track back and help in defence. Jibon hardly had time on the ball and the only chance came when his lobbed shot was cleared off the line by Adil Khan.

He was brought in for Rayhan in the second half and did a commendable job in restricting the Indian attackers.

The youngster was brought in late and hardly had any impact on the game.