The new season commenced on a strong note with several new stars making their mark in the opening week.

The much-awaited I-League 2019-20 season started on 30th November and the first week saw a lot of action taking place. It has always been a highly-competitive league and in the first week itself it has lived up to it’s reputation.

At the end of the first week, we have seen some closely contested duels, some missed chances, goals galore, great defending and some exceptional young talents proving their calibre on a big stage in Indian football.

We have witnessed some terrific performances and here are our picks for the I-League Team Of The Week 1:

The Aizawl FC custodian had a terrific outing against Mohun Bagan in the I-League curtain-raiser, as the Reds managed to keep a clean-sheet. Lalremruata is one of the senior figures in a comparatively young Aizawl FC squad and he stood up to the challenge with aplomb.

The 25-year-old had answers for all the questions asked by the Mohun Bagan forwards and being a senior figure he marshalled his troops well throughout the game, as the hosts were mostly defending against the Mariners. A solid performance right at the start of the season will be a huge boost for him, as he also earned the ‘Hero of the Match’ award.

The Gokulam Kerala full-back joining from NEROCA has really taken big strides in the first week of the I-League. The 20-year-old right-back has followed in the footsteps of Sebastian and this Manipuri duo has the mettle to take Gokulam Kerala to great heights this season.

Naocha has shown great maturity in his play and was really good in the transitional phases. While Sebastian ventured forward, he had a balanced approach and aided experienced defenders like Haroon Amiri and Andre Ettienne. He has grown in confidence under Santiago Varela and if he manages to keep up his progress, then the Malabarians will definitely be a team to beat this season.

The 32-year-old centre-back made his I-League debut for Churchill Brothers and it was a day to remember. He partnered Robert Primus in the heart of the defence against Punjab and kept the likes of Dipanda Dicka and Jay Hart completely out of the game throughout the 90 minutes. He repeated a similar feat against Mohun Bagan and this time went up a notch by scoring a goal in their 2-4 mauling of the Mariners.

Abu Bakr was very composed with his passing and held his line really well. He also shares a great rapport with the other defenders which has helped the Red Machines to start strongly this season.

The former Punjab FC defender has joined Real Kashmir this season and fared quite well in his first match for the Snow Leopards against East Bengal. Arashpreet is very versatile and despite being a centre-back he has the guile to slot in as a left-back.

Owing to that, David Robertson slotted him in at full-back and it worked well for the Snow Leopards, as Arashpreet was very sound defensively. He kept Pintu Mahata at bay and forced Alejandro Menendez to change his plans in the second half. Although, Real Kashmir failed to churn out a win against East Bengal after leading for most of the match, Arashpreet had a great outing away from home and will look to keep up this form.

The young right-back from Imphal has joined Gokulam Kerala this season and after impressing everyone with his performances in pre-season, he carried that form into the I-League. Sebastian is known for his work-rate and tenacity going up and down the field.

The former NEROCA FC full-back made some marauding runs forward through the right channel. One of his crosses found Marcus Joseph in the penalty area, who made no mistake in doubling the scoreline. He was equally effective against the Indian Arrows and despite facing some trouble from their energetic wingers, Sebastian and the whole Gokulam defence managed to keep a clean-sheet. The 21-year-old will look to build on this performance, as Gokulam seem to be genuine title contenders this season. 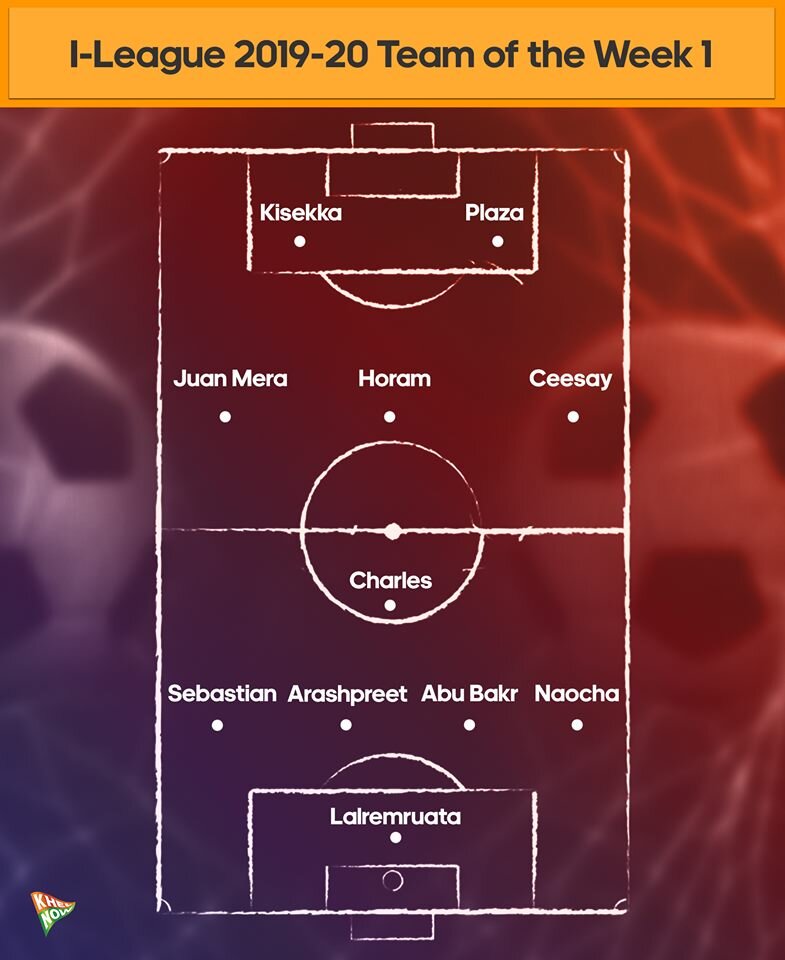 Charles has been the mainstay in midfield for Chennai City FC for sometime now. Last season, he was a celebrated name in the whole of Tamil Nadu, being one of the senior players to guide the Southerners to their maiden I-League trophy. The experienced midfielder has kept up the good work from last season and had good outing against TRAU.

Charles did most of the defensive duties allowing players like Mashoor Shareef and Katsumi Yusa to venture forward and help the forwards. If Nawas has aspirations of defending the title he needs Charles to step up and let his experience resonate throughout the field mainly among the inexperienced local players.

The assist master from last season has started this season exactly from where he left. Ceesay has been the attacking nucleus of the Red Machines and that has not changed this season as well. The Gambian midfielder has amassed three assists in the first two matches of the season and will be gunning for more. Ceesay looks like a player who wants to prove a point and his combination and understanding with Willis Plaza resonates on their style of play.

The 26-year old had a good outing against Punjab FC where he played in a free role and combined well with Plaza. But against Mohun Bagan he turned the tide in Churchill’s favour, Ceesay was excellent with his mazy runs and accurate crosses. He always found open spaces in between the porous Mohun Bagan defence and threatened them throughout the game. All in all if he continues this devastating form Churchill Brothers will definitely challenge for the title this season.

A new kid in the block for NEROCA FC who caught the eye in the first week was Chanso Horam. The 18-year old attacking midfielder was pulling the strings for Gift Raikhan’s men as they defeated Aizawl FC at home. Horam had a good game against Gokulam Kerala as well.

Although he is far from a finished product and still needs to be more composed in from of goal, there is still something special about this young midfielder from Imphal. His first two performances will put him in good stage for the rest of the campaign and if he keeps up the consistency he can be the find of the season.

Another player from East Bengal who makes the list is Juan Mera Gonzalez who has already become the fan favourite of several Red and Gold supporters after his dazzling performance against Real Kashmir. The former Celta Vigo ‘B’ midfielder was East Bengal’s main attacking impetus and his trickery coupled with acceleration kept the Real Kashmir defenders on their toes.The 26-year old created several chances over the course of the match but it was late in the game when Marcos de la Espada equalised from his low cross. Gonzalez controlled the left channel with his unpredictability and panache.

He kept the momentum high against Punjab FC as well as the Spaniard was given a more central role this time. It was from his long range effort East Bengal equalised right at the dying embers of the game. The Red and Golds are yet to register a win but Juan Mera has already made a place in the supporters’ hearts.

The Ugandan forward returned to Gokulam this season and so has his goalscoring form. Kisekka is known for his strength upfront and his eye for goals. He has shown both in the first week of the season for the Malabarians. While most eyes are on his partner in crime, Marcus Joseph, the former Mohun Bagan man is slowly getting the job done.

He was clinical against NEROCA as he showed tremendous control and his ability to out-muscle defenders in the final third and scored the opening goal of the season. The 30-year old carried that destructive form against Indian Arrows, where Santiago Varela’s side were not at their best but still Kisekka scored early in the second half and allowed Gokulam to take control of the game.

The Caribbean striker loves the I-League has already started scoring goals for fun. He had a decent outing against Punjab FC where he found the back of the net and held up the play as a target man and allowed the likes of Mapuia, Vinil Poojary and Ceesay to latch on the second balls.

However, against Mohun Bagan he showed his true colours, as he scored early on which resulted in the Red Machines taking charge for most of the proceedings. The former East Bengal forward is clinical and his opportunistic nature makes him a nightmare for opposition defenders. If Plaza replicates last season’s performance and considering Churchill’s compact defence, the Red Machines may gun for glory this season.