There have been several outstanding performances in the past week.

As the I-League moves closer into the final stretch of the season, multiple teams pegged forward in their hunt for a podium finish in the last week. Mohun Bagan further flexed their muscles by exacting revenge for their early-season loss to Churchill Brothers.

With their league victory looking a matter of time now, those behind them are surging forward, looking to gain second place, which could grant them an AFC Cup Qualifiers spot next season. Real Kashmir’s ambitions took a slight blow, but they still remain in the frame to catch up with Punjab FC.

East Bengal also recorded back-to-back wins for the first time since mid-December and swooped into a top-four position. The North East clubs had topsy-turvy results.

Zothanmawia had a tough night in store against defending champions Chennai City FC, who were desperate to get back to winning ways themselves. The Lions roared forward with one attacking move after another and tested the very best of the young Mizo goalkeeper.

But, Zothanmawia was ready for the challenge, as he made one save after another to frustrate the hosts. While he was lucky that Katsumi Yusa’s late winner was ruled out, his five saves ensured that Aizawl stayed alive long enough to salvage something from the game.

Despite not playing in the crunch game against Churchill Brothers, Novin Gurung was slotted back in against young Indian Arrows and did his job perfectly. The 20-year-old was a sturdy figure down the right, restricting the tricky Ayush Adhikary’s threat.

He ensured that the Snow Leopards controlled the game throughout and came away with another clean-sheet. 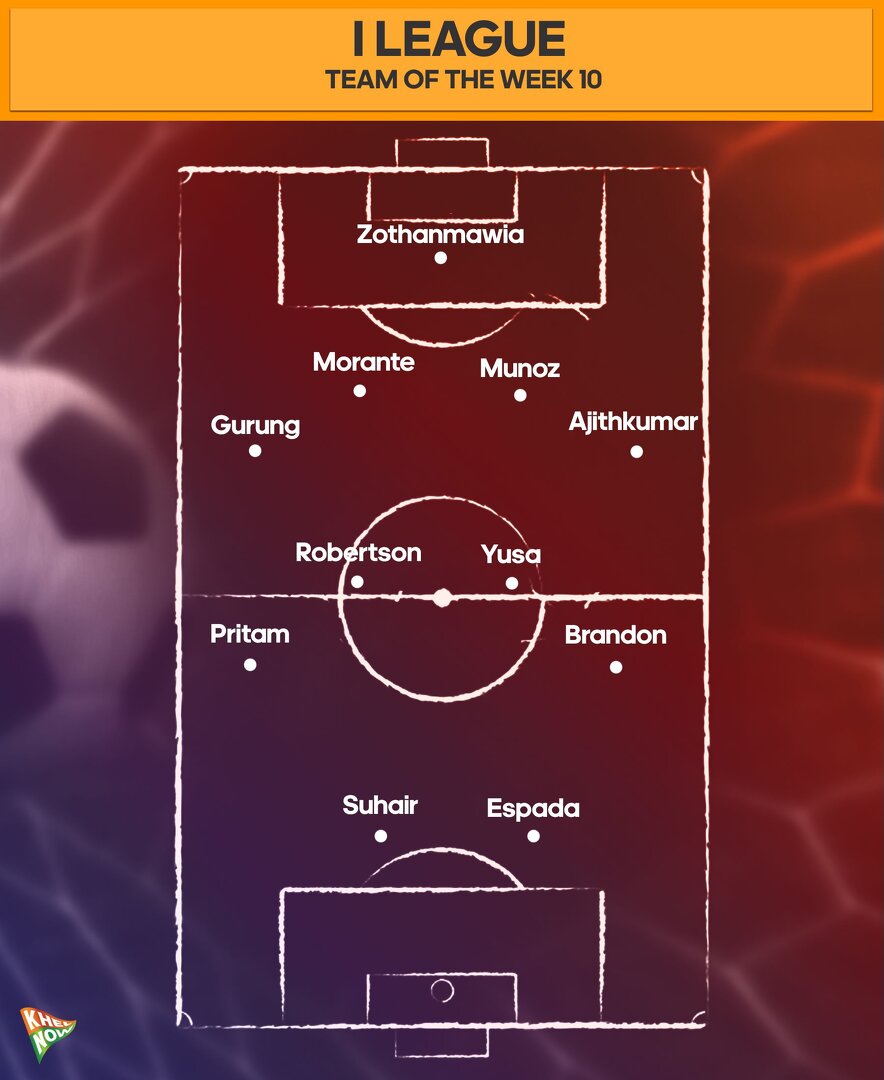 While he’s seen his fellow Spaniards steal the spotlight in recent months, Fran Morante continued his good work and redeemed himself against Churchill Brothers. He undid his mistakes in the reverse fixture with a rock-solid performance at the Fatorda, keeping Willis Plaza & Co. quiet.

He dealt with Plaza’s threat admirably well, making timely challenges and not allowing him much space. Morante’s distribution was commendable as usual, as he helped the Mariners to a clean-sheet, which was the perfect cherry on top for a big win.

Fran Gonzalez was unable to get among the goals against Churchill. However, the Spaniard was once again an absolute pillar in protecting his backline, making crunching tackles and cutting the Red Machines’ supply pretty well.

He also ended up getting an assist, tipping a sweet header to allow Papa Babacar Diawara to score the opener, setting up a comfortable afternoon for the Mariners. His overall heroics spurred them on and won him the Man of the Match.

Chennai City remained cautious of the attacking threat Aizawl possessed on Sunday and dealt with it relatively well throughout. Ajith Kumar was at his energetic best on the left flank, as he dealt with the in-form Matias Veron pretty well.

He didn’t allow the visitors to script many attacks through his side, being a vigilant figure in sniffing out danger. He ensured his team gained the lion’s share of possession and moved forward with intent, putting in a tenacious shift on the left.

Pritam Singh continued his impressive work with NEROCA FC since signing on, by putting in another thunderous performance on the right wing against Gokulam Kerala. Playing against a defence with a sturdy reputation, Singh started the onslaught right from the getgo and scored the fastest goal of the I-League season by curling one in from outside the box within two minutes!

He kept tormenting their backline with his clever runs into the box and played a part in turning things around, later on, getting the Man of the Match for his heroics.

As Real Kashmir returned home after a lengthy period on the road, Mason Robertson ensured that their fans tasted the sweet joy of victory against Indian Arrows. After being frustrated by Churchill Brothers, the Scotsman was all guns blazing against the young development side.

He continued hassling them with his bursting runs into the box, creating quite a few definitive chances. It was his long throw which caught the Arrows off guard for Barzie Armand to score the winner.

Katsumi Yusa spirited the Chennai City side forward against Aizawl, being at the centre of almost every attractive attacking move. Yusa buzzed like a bee around the attacking areas, getting into some promising positions and linking with his teammates really well. He scored the opener by thundering a header into the net.

After watching Aizawl pull one back, he pegged his side forward for the winner and even got it late on with a clever finish, but it was ruled out due to his hand-ball. Regardless, Yusa’s electric efforts won him another Man of the Match.

East Bengal found themselves in big trouble after going behind against TRAU FC. But, once Brandon Vanlalremdika was introduced into the fray after half-time, he changed the complexion of the game. The sparky winger influenced their turnaround, getting into all the right positions and linking up really well with his teammates.

He played a part in the equalizer, before scoring the third with a strong drive that went through Sayan Roy. Brandon’s blistering second half display won him the Man of the Match award.

Opinion: Why a longer calendar for Indian football makes sense

Despite all of Mohun Bagan’s heroics in recent months, VP Suhair experienced a real barren run since netting against TRAU. But, he ensured that goalless run would end by bulldozing his way to scoring against Churchill Brothers. As usual, Suhair’s incisive runs down the right and link-up play were really good, but his final product was also clinical.

He scored the second goal in emphatic fashion, skipping past a few bodies before powering the ball into the net. Suhair again worked his socks off to ensure some beautiful football for the Mariners and was finally rewarded for his hard work.

Marcos de la Espada has been the point of extreme criticism from East Bengal fans in recent weeks, with many wanting him replaced from a long time. But, he silenced his doubters with a proper striker’s performance against TRAU. Espada hassled their defenders with his physicality and hold-up play, tipping the ball to Jaime Santos Colado for his equalizer.

The Spaniard then tipped Juan Mera’s free-kick to Aidara for his goal, before playing a superb through-ball for Brandon’s goal. Espada rounded up his evening by scoring a penalty, summing up a superb performance and one which he must replicate in the games to come.