It was a entertaining week of action in the competition with several young stars impressing.

After crossing the midway point of the season, the I-League is heating up as we inch closer to the business end. Mohun Bagan took a huge step forward in pursuit of a final I-League title before moving to the Indian Super League with a decisive win over second-placed Punjab FC.

Their other title challengers had polarizing results, with Gokulam Kerala and Churchill Brothers both succumbing to defeats, but Real Kashmir maintaining their winning run. At the other end, Chennai City pulled off impressive back-to-back wins to get back into the top four. Meanwhile, NEROCA FC regained momentum with a huge Imphal Derby win over TRAU FC, while East Bengal’s misery continues.

In a series of thrilling contests, a few players added to their reputation with match-winning performances across the field. Here is Khel Now’s I-League Team of the Week 8:

It’s now three clean-sheets in a row for young Phurba Lachenpa, who ensured that Real Kashmir skated back into the top three with a gritty win. The former Shillong Lajong custodian was once again in top form, putting off whatever unpredictable long-rangers Gokulam Kerala had to offer with some stunning reflex saves.

He ended up frustrating Marcus Joseph & Co. with his athleticism, denying them throughout with repeated stops and securing another win for the Snow Leopards. 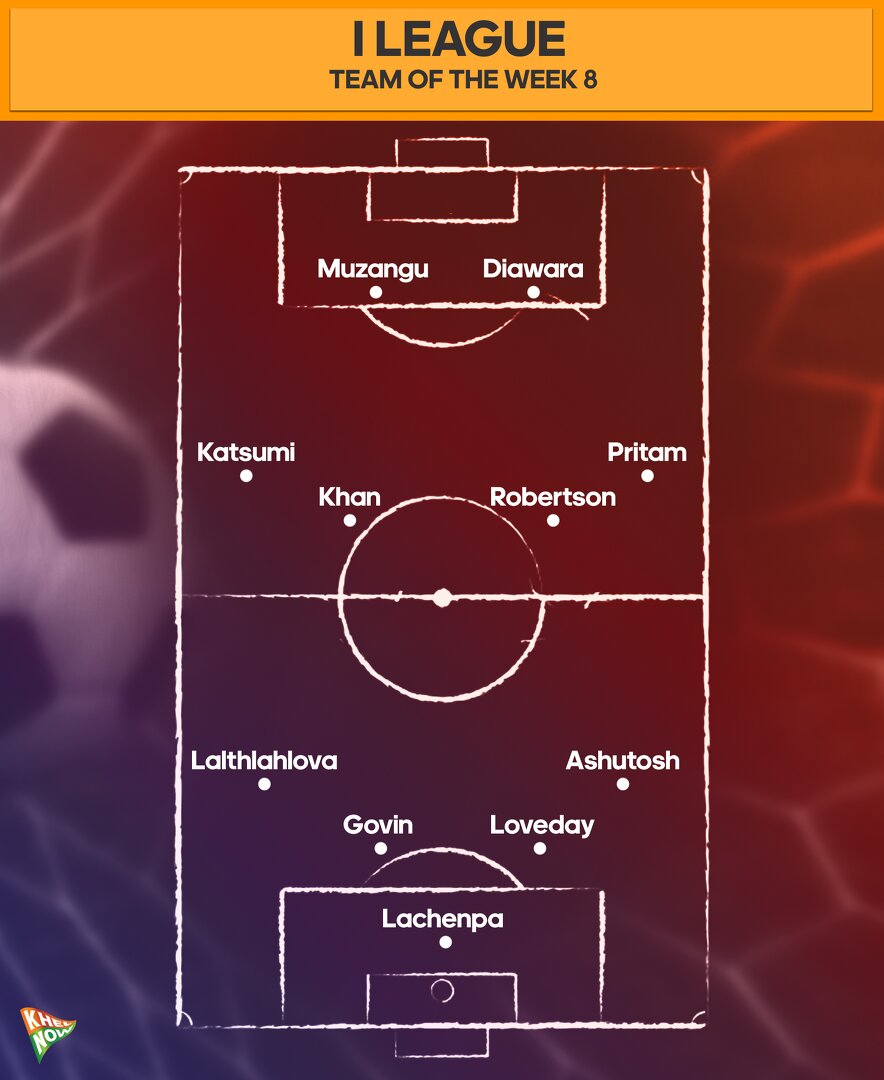 Ashutosh Mehta’s transformed into a pillar of Mohun Bagan’s success under Kibu Vicuna and continued his heroics against Punjab FC. The former ATK right-back was on song against the visitors, keeping the dangerous Sergio Barboza at bay with his strict defending.

Mehta made persistent tackles, interceptions and clearances to dispossess Punjab’s players and move the ball forward. He was always willing to make overlapping runs and was vocal in keeping things together, which helped in ushering the Mariners to an important win.

Loveday Enyinneya had a formidable task dealing with the threat of Henry Kisekka, but he handled himself really well to help Real Kashmir absorb the pressure.

The Nigerian centre-back denied Gokulam proper goal-scoring opportunities with his immaculate defending, maintaining a disciplined backline to frustrate them. He also assisted Mason Robertson’s winner with an inch-perfect cross, summing up an all-round solid performance.

Among the more experienced players on the pitch, Govin Singh had a big role to play in order to usher NEROCA to reign supreme in the Imphal Derby. The 32-year-old put in a commendable performance in defence, keeping things calm with his temperament and thwarting whatever TRAU threw at them.

He kept the dangerous Princewill Emeka quiet with his solid work, making crucial challenges to deny his rivals a chance.

Aizawl FC pulled off a major surprise at the expense of East Bengal by thwarting the Red and Gold Brigade in their own backyard. While it wasn’t the best performance from Stanley Rozario’s boys, they were defensively strong and left-back Lalthlahlova was in superb form.

He kept the dangerous Juan Mera Gonzalez’s threat contained, keeping a track of his movement and not giving him much space to threaten. The left-back made some necessary tackles and thwarted away a lot of pressure to gain a precious clean-sheet in the narrow win.

Pritam Singh was in prime form during the Imphal Derby, running TRAU ragged with his electric movement down the right flank. He made some impressive forward-runs in the first half, but really turned up the volume in the second.

Singh went past their defenders at will to score the first two goals with two emphatic strikes, before completing a hat-trick with an easier tap-in. The 26-year-old became the first Indian to score a hat-trick in the I-League this season, capping off a 5-star performance in style.

Ever since he returned to the fray, Mason Robertson has had a direct impact in turning around Real Kashmir’s fortunes. The Scotsman continued his excellent work against the daunting Gokulam Kerala side packed with impressive talents.

He aided his defence by dropping deep, forming an impenetrable line, pressing Gokulam hard and making necessary challenges to avert danger. Robertson also cleverly headed in the winner to take his tally for the season to five and seal another win for the Snow Leopards.

Imran Khan was recharged by the thrill of the Imphal Derby and became a real fan-favourite with an excellent performance from midfield. Not only did he help his side move the ball better with his incisive passes, but Khan also got onto the score-sheet with a sweet strike to double their lead.

He then teed up multiple assists for Pritam Singh, finding him with perfectly stitched passes to end the game with a goal and two assists. The former Mohun Bagan midfielder completely dominated TRAU, putting in a memorable show to get NEROCA back to winning ways.

‘No Manzi? No problem!’ said Katsumi Yusa, as he guided Chennai City to back-to-back wins for the first time this season. Yusa rolled back the years with clinical performances, first ruling the roost over young Indian Arrows and creating a few notable chances as well.

He scored the winner against Arrows with a strong header to seal the points and continued his heroics against Churchill Brothers. The Japanese was high on adrenaline as he skipped past Churchill’s defenders to score a stunning opener, playing a big part in getting the away win.

Another day, another Man of the Match performance from Papa Babacar Diawara against Punjab FC! The Senegalese striker was high in confidence as he bullied Punjab’s defenders with his movement and hold-up play, ushering his side forward with clever passes.

But, Diawara’s crowning moment came towards the end of the first half, when he showcased his predatory instincts by capitalizing on an error and powering a header into the net. That proved to be the winner, as Diawara sealed another three points for the Mariners.

Juan Ferrando: Finishing issues are not a problem

The 19-year-old FC Basel loanee is finally bearing fruits for the defending champions and was in top form in their consecutive wins last week. Muzangu tormented Indian Arrows’ defenders with his mazy movement, but failed to get involved in goals.

However, he didn’t miss the chance taking on Churchill Brothers, keeping the drama reserved for late. In added time, Muzangu skipped past multiple defenders before slotting the ball into the net to gain all three points for Akbar Nawas’ side, repaying his coach’s confidence with a crucial winner.