The list consists of several blockbuster names that have made great contributions to the national team.

It has been a topsy-turvy decade for Indian football, having seen sea of changes that have had lasting effects on the national team. The Blue Tigers were at the 142nd rank in 2010 and as the decade is coming to an end, they stand at the 108th position. It is a positive, certainly, but 130 crore Indians expect better from its football superstars.

In this year-ender and decade-ender, Khel Now presents the eleven players who have battled hard to get into our team of the decade. Some players came very close to making the cut but were edged out on votes.

This position was not really debated much. Gurpreet Singh Sandhu was the third choice in 2011, the second by 2015 and post-2016, has made the position his own. He’s made some memorable saves and was the difference as India held Qatar to a goalless draw away from home earlier this year, saving more than half-a-dozen shots on target.

Pritam Kotal, Arnab Mondal, Sandesh Jhingan and Narayan Das are our picks. This is based on sheer consistency and the amount of football these players have played in the past decade.

Having made his debut in 2015, Kotal has played most of the games for India, donning the NT jersey 36 times in the meanwhile. He’s been pushed out of the XI by Rahul Bheke recently, but Kotal keeps coming back. He’s in for the long haul, and still remains one of the regulars in the NT. 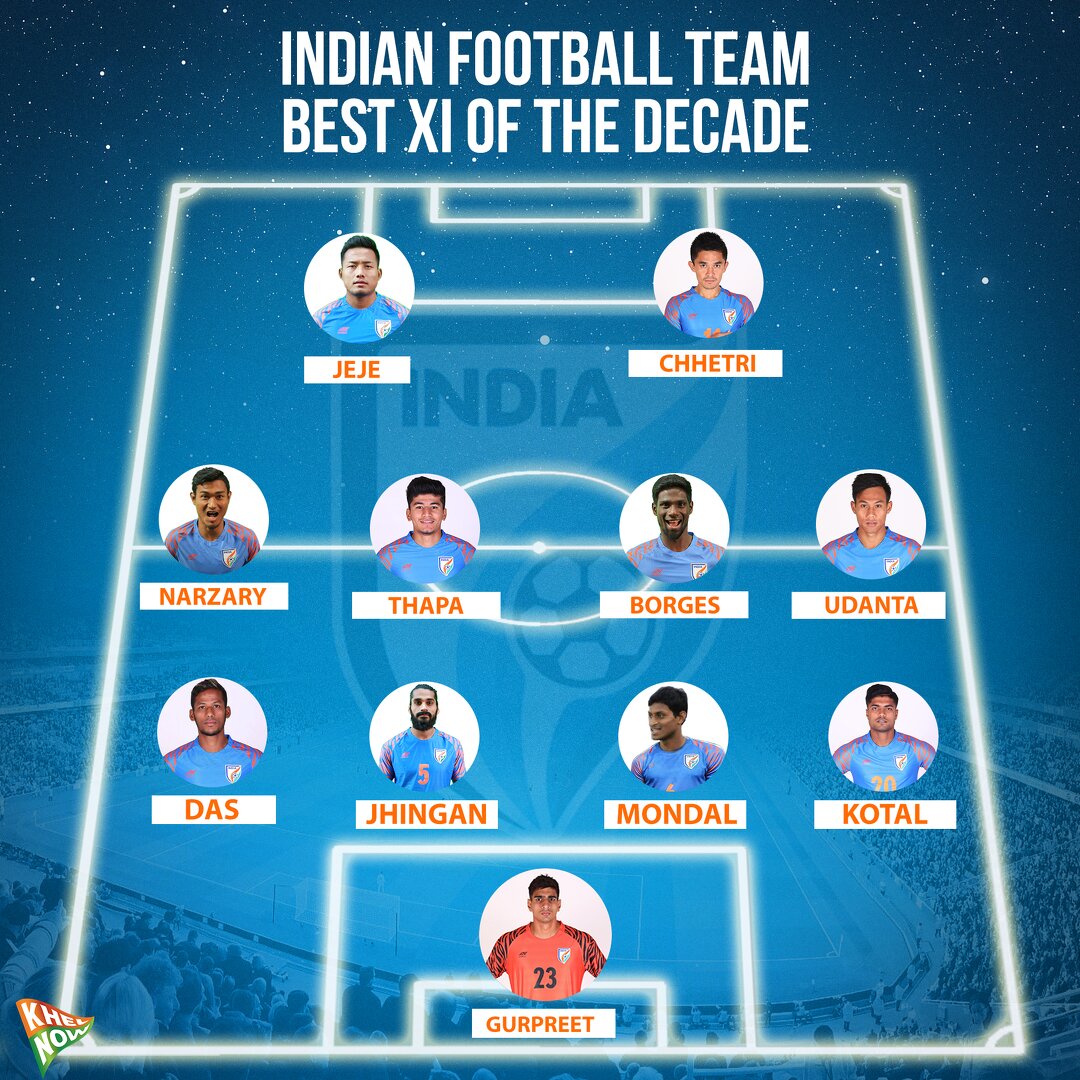 Centrally, Arnab Mondal has represented the team 27 times between 2013 and 2016 and remains one of the brashest defenders India has had in recent times. His energy was never-ending and Anas Edathodika lost out to him very closely.

Joining Mondal centrally is one of India’s leading players at the moment, Sandesh Jhingan. Having played for several clubs across the length and breadth of the country, the 26-year-old is arguably India’s best defender of the decade for several people. He’s played 36 times since making his debut in 2015 and has scored four times. He’s set to lead the backline and can be expected to take the armband once Sunil Chhetri hangs his boots.

Narayan Das just crossed over the line, as he was part of the most regularly fielded backline in the decade. Subhasish Bose got a lot of votes for LB, while some voices were raised for Jerry Lalrinzuala and Dhanachandra Singh as well. The Odisha FC full-back, though, got the most votes to make it to the XI. He’s been on the pitch 29 times since 2013, making his debut at just 20. He also scored a solid goal against Puerto Rico in a friendly in 2016.

Choosing the wingers was easy, but the midfield was really difficult and it got down to the wire. At the end, it was Udanta Singh, Rowllin Borges, Anirudh Thapa and Holicharan Narzary who got over the line and made it to the decade’s best XI. Let’s see why.

Udanta had some big names to usurp, like Jackichand Singh, Seityasen Singh Irom, and even Steven Dias. Seityasen was thrilling on his days but played just five times for the NT and Dias made most of his crosses in the last decade, playing only till 2011.

It was just between him and Jackichand, and looking at sheer quality, Udanta won. The Bengaluru FC speedster made his debut at 19 in 2016 and has played 27 times already. Jacki, on the other hand, has 19 games under his belt. The senior pro had a great game against Puerto Rico (the 4-1 victory), but the flashes of brilliance were too few and far between.

Rowllin Borges is in on sheer perseverance and on the amount of game time he’s seen. He’s a fluid transformer, can don several roles and that has seen him play 33 times already since making his debut in 2015. He’s partnered Eugeneson Lyngdoh, Vinit Rai, Pronay Halder and several other names in the heart of India’s midfield. Halder, in fact, came closest to displace him, but couldn’t.

It was a clear toss-up between Lyngdoh and Anirudh Thapa for the second midfielder’s role, and Thapa won it just by one vote. At 21, Thapa has already represented the Blue Tigers 24 times, even captaining them once. Eugeneson played an equal number of games for the NT and was one of the midfielders India would’ve loved to have for a longer time. Injuries were his undoing. Thapa is the golden boy of Indian midfield and is expected to take it forward in years to come.

On the left-wing, Holicharan Narzary was the name most people could come up with. Clifford Miranda threw in a feeble challenge from Goan quarters, but the number of appearances weighed in. Narzary debuted in 2015 at 20 years of age and since then, has played 26 times. He is known for his tireless work-rate and was a favourite of Stephen Constantine.

You guessed the first one correctly, India’s captain, leader, legend Sunil Chhetri. Robin Singh got a look in, Subhash and Balwant Singh were considered for a bit too, but in the end, everyone agreed that Jeje Lalpekhlua had done enough to find a place.

Chhetri, inarguably, has been the best player and captains our team of the decade. He’s got the ability and has showcased how he can score from anything. Left foot, right foot, free kicks, headers, volleys, smart flicks – he’s done et al. Chhetri has been India’s torchlight in the last 10 years, taking the bulk of the workload. The Bengaluru FC captain has played 115 games for the NT, scoring 72 times. He’s an absolute legend!

Robin Singh played 30 games and scored five times for the NT since making his debut in 2012 and has had some memorable moments. Jeje Lalpekhlua, on the other hand, has been more prolific and thus, makes the cut ahead of his more stylish friend. The Chennaiyin FC sharp-shooter made his debut in 2011 at just 20 and has scored 23 times in 56 appearances. Now you know why we call him prolific!

Another one that’s easy. The three-odd years of Wim Koevermans may have tried to leave a long-lasting impression on the National Team, but Stephen Constantine came in, brought in the defensive English style and the team followed it to the T for the next four years, 2015 onwards.

Constantine took Indian football team from 173 in the FIFA World Rankings in March 2015 to 97 in December 2018, no mean feat in itself. It was a decade of his. India may have deserted his football, but still, long for the effectiveness that the NT had under him. Indian football team were consistent in its performances and results under the English manager.