After a weary international break, the Indian Super League (ISL) picked up from where things left off with some action-packed bouts being played out in the last week. Be it last-minute drama, lots of goals and movement around the table, the league has become even more competitive, with almost seven teams still well in line to challenge for a playoffs spot.

With great entertainment also came some sublime performances from individuals to usher in positive results for their teams. While certain Indian players continued their impressive rise to push for a national team spot, some influential foreigners proved their worth as well. So, here we’ll look at Khel Now’s ISL team of Gameweek 4.

Subrata Paul had a monumental task ahead of him facing FC Goa in an away game, but held his own despite a barrage of attacks coming his way. The veteran goalkeeper made a few stunning grabs to deny the hosTS, continuously frustrating the opposition with his timely stops.

The 33-year-old custodian looked confident with his work, making five saves and distributing possession well. Subrata earned a clean-sheet and denied the Gaurs at their home, a unique feat in itself.

The former Minerva Punjab youth product is having his breakthrough season in the ISL, coming up with another set of rock-solid performances for Odisha FC. Sarangi was instrumental in keeping things clean against ATK, nullifying their threat through his side with six clearances and two interceptions.

Sarangi did a number on Lallianzuala Chhangte against Chennaiyin FC as well, keeping him contained and making four clearances, four interceptions and three tackles. The youngster is turning more dangerous romping forward as well. 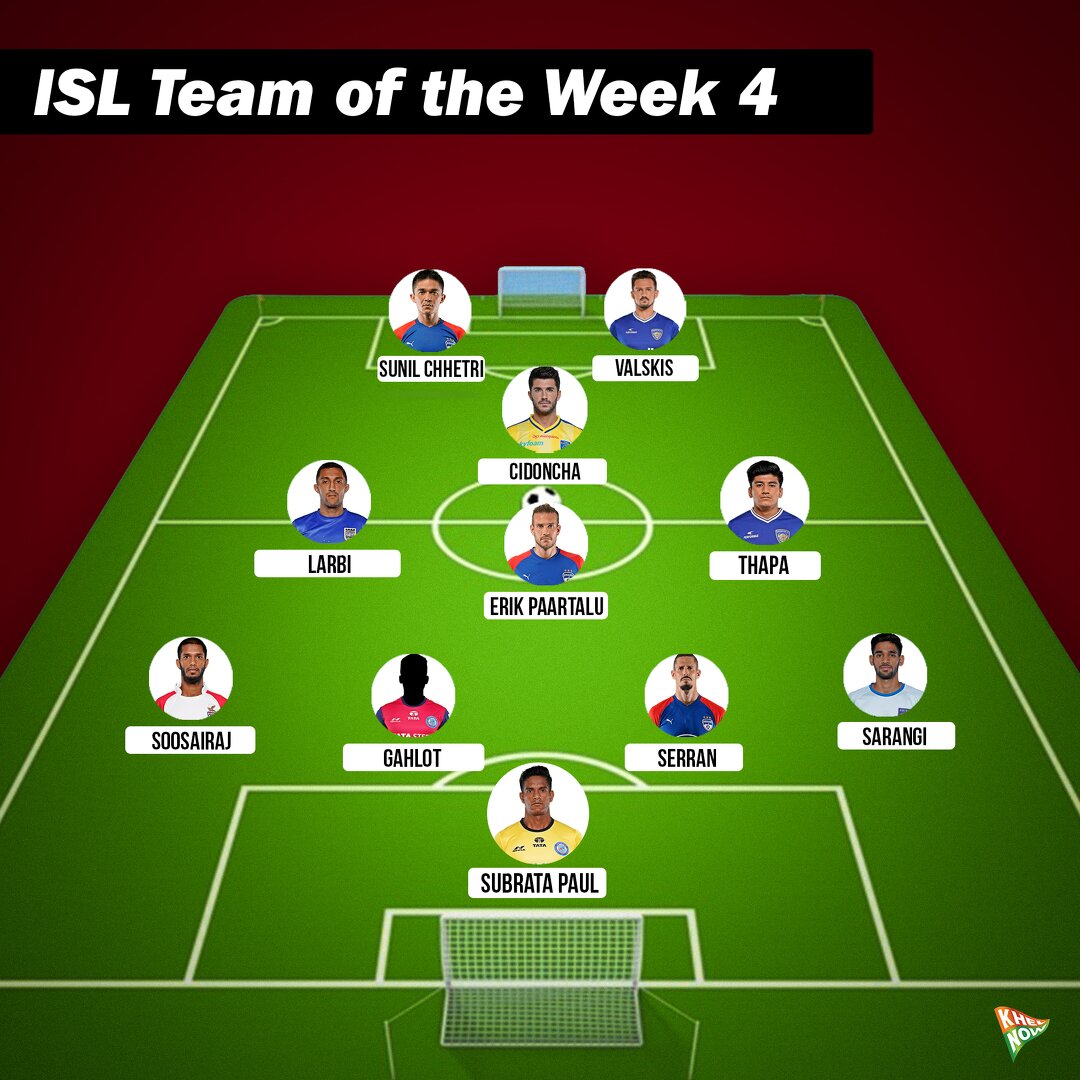 Bengaluru FC have the best defensive record in the ISL and Albert Serran’s expert work is a big reason for that. The Spaniard had another solid set of performances for the Blues, keeping Bartholomew Ogbeche quiet in an intense match against Kerala Blasters. The 35-year-old defender also put in a strong shift against Hyderabad FC, but was unlucky to concede late on.

With five clearances in each game, more than a couple of interceptions and tackles, Serran put in a string of industrious shifts to maintain an impenetrable backline for the Blues.

Making his Jamshedpur FC debut in hostile conditions, Narender proved why he’s touted as the future of Indian football’s defence, with an excellent outing. The youngster not only kept Manvir Singh quiet, but also maintained a near-perfect defensive line alongside his fellow defenders to frustrate the Gaurs.

The 18-year-old defender worked his heart out sniffing out and thwarting threats, making an incredible 11 clearances, three interceptions and a couple of strong tackles to help his side keep a rare clean-sheet at the Fatorda Stadium.

Michael Soosairaj is reinventing himself at ATK and continued his impressive work for the league leaders after the international break, proving why he deserves a shot in the national team. He put in an industrious shift in the Kolkata side’s goalless draw against Odisha FC, but really found his groove against Mumbai City FC.

Soosairaj glided past Souvik Chakraborty with ease, tormenting him with his persistent forward runs. He also scored his first goal for ATK, with a sublime finish.

After being dropped from the national team, Anirudh Thapa looked to notch his performances a level up to make his point for Chennaiyin FC. The young midfielder was the driving figure for the Marina Machans in their first (and till now only) win of the season, taking a few ambitious swipes at the goal, only for them to be diverted.

But, he stitched together many attacking moves and roared his side ahead against Odisha FC, against whom he also proved his defensive attributes with four interceptions and a couple of blocks.

Much of Bengaluru FC’s defensive praise has been given to their defenders, but Erik Paartalu’s been crucial towards keeping a tight shape for the defending champions. The Australian put in a strong shift against Kerala Blasters, not allowing them much room to penetrate through the backline.

He also went toe-to-toe against the more physical Hyderabad FC, making five clearances and a couple of solid blocks to counter their style.

Mohammed Larbi is slowly integrating himself into a crucial cog in Mumbai City’s midfield and was influential in their results in a tough environment after the international break. The Tunisian midfielder looked menacing with his set-pieces against NorthEast United, but really shone through against league leaders ATK.

Larbi glazed past the opposition midfield with ease and kept on encouraging the forward with his decisive passes. Larbi created four chances against ATK, including an assist for Pratik Choudhary’s equalizer. He’s finding his footing in the ISL and recently showed signs of evolving into an influential force in Mumbai’s midfield.

After having taken some time to blend into Kerala Blasters’ environment, Sergio Cidoncha’s move is finally bearing fruit with a series of promising performances after the break. The Spaniard impressed for the Blasters against Bengaluru FC, putting in a tenacious performance with four blocks, three clearances and two tackles.

The midfielder followed that up with a thunderous start against FC Goa, scoring a swift left-footed strike to setup an eventful night. Cidoncha remained a vigilant figure in Kerala’s midfield, making a couple of vital interceptions and clearances. He also controlled the game well, with an 83% passing accuracy, rounding off a superb showing against the Gaurs.

For all their defensive masterclasses, Bengaluru are still having problems finishing off chances. But, what Udanta Singh and Ashique Kuruniyan are lacking in, Sunil Chhetri is making up for gloriously. The Bengaluru captain continued his impressive form, scoring a thunderous diving header to win the derby against Kerala Blasters.

Chhetri showcased his instincts by capitalizing on Hyderabad FC’s mistake to score the opener against them. Chhetri’s finding his goal-scoring wit back at the perfect time for Bengaluru FC and two hard-working performance proved he’s getting back to his best.

After a relatively slow start to the season, Nerijus Valskis is proving why Chennaiyin FC maintained their trust in him. The 32-year-old striker looked like a changed man after the international break, being a menacing figure against Hyderabad with his cunning movement.

The Lithuanian striker won the hearts of the fans with a dramatic last-minute winner against Hyderabad and continued his good work against Odisha FC. With a poacher’s finish from close range and an emphatic header, Valskis showed how complete a striker he is and why Chennaiyin can rely upon him to score goals and win them valuable points.