The two teams have collectively lifted the trophy thrice.

The league phase of the Indian Super League came to a close leaving four sides to battle it out for the title, each of whom have featured twice in the competiton’s final. After missing out on securing the top spot, ATK return to the playoffs after two years to face defending champions Bengaluru FC – who have entered the playoffs stage for the third time running.

Two-time champions ATK grabbed their first victory over the Blues in the Indian Super League earlier this season and would look to add to the tally in the semi-finals against the Blues. Bengaluru, who very recently dealt with AFC Cup heartbreak, now shift their focus to the playoffs and will be hoping to secure a third consecutive ISL showpiece appearance.

Here are five key duels which could decide the tie when these heavyweights clash in the semi-finals of the Indian Super League 2019-20: Bengaluru FC’s midfield magician Dimas Delgado has arguably been their best player this season. The Spaniard has great control over the game and has completed more than a thousand passes this campaign, with five assists to his name. Delgado’s composure with the ball helps the side tick and his accurate passing rakes in the goals for the Blues.

Mandi Sosa has been formidable in midfield for ATK. His defensive qualities bring out the balance in the ATK side and will prove to be very crucial if he’s up against Bengaluru. It would be impossible for Mandi to cut off Delgado’s passing lanes but the ATK midfielder must ensure that the Blues have very few options to pass to. 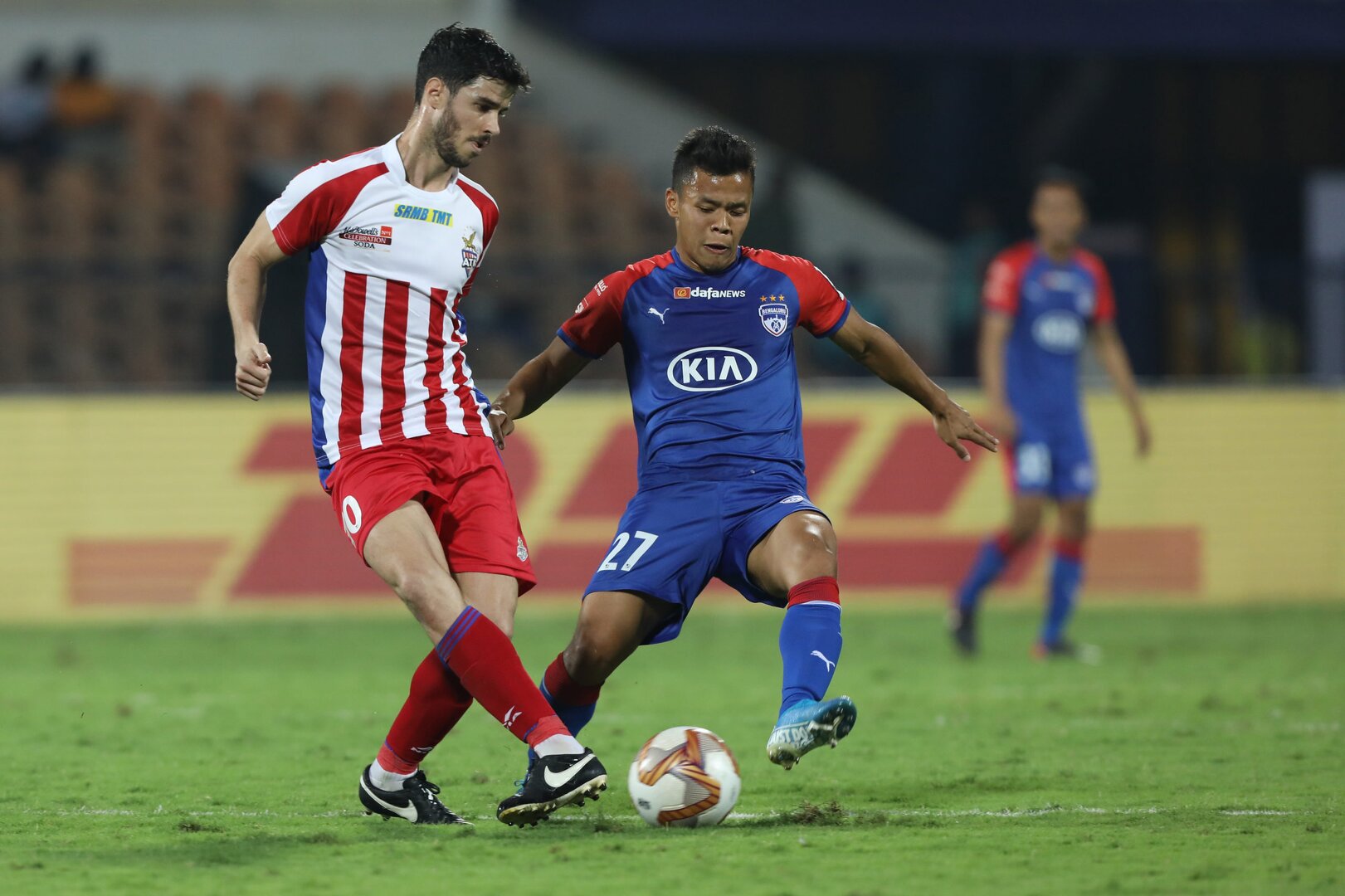 ATK’s Edu Garcia has had a brilliant season so far. The Spaniard has eight goal contributions from 13 games and netted his fifth goal against his former side Bengaluru FC in the previous fixture. Garcia uses the free spaces in midfield to create chances for the attackers. His slick passing cuts through the narrowest of gaps and often falls in the strikers’ path. His movement off the ball is a commendable trait of the midfielder.

Suresh Wangjam has risen through the ranks at Bengaluru and has turned out to be a key part of the squad. He was handed his first start against Odisha FC when Carles Cuadrat decided to play the midfielder to mark Xisco Hernandez. Suresh was on Xisco’s heels and offered the Spaniard no room to breathe. The young Indian midfielder has been a regular in the team ever since and has been very consistent with his performances in midfield. He will be instrumental in Cuadrat’s plans for Garcia in the semi-finals against ATK. It would be a cracking contest to witness these two in midfield.

Prabir Das has been a prominent figure on ATK’s right flank ever since he returned to the squad following an injury that kept him out for the whole of last season. He has been solid in defence and is often seen working his socks off to get the ball into attacking spaces with some fine crosses. The Indian defender has notched up three assists so far and has put in some great shifts at the back. Going into the semi-final and facing a player of Sunil Chhetri’s class would be a huge task for the defender and will be a massive challenge to overcome.

Meanwhile, Chhetri would look to settle into the team and regain his rhythm after missing out on all of the side’s league matches in February. The last time Sunil played against ATK, he put in a very forgetful performance with no shots on target. The Blues would pin their hopes on the captain to find the back of the net just the way he has been doing all season. On 3rd May 2015, Erik Paartalu partnered with David Williams for A-League outfit Melbourne City FC, beating Wellington Phoenix in the elimination final of the tournament. The latter club featured Fijian striker Roy Krishna. Close to five years later and in the other hemisphere, David Williams has paired up with Roy Krishna at ATK and will take on Erik Paartalu of Bengaluru FC, in the semi-finals of the Indian Super League.

David Williams has already got the better of the Blues’ once when he netted ATK’s winner against Bengaluru FC earlier this season. The Australian forward has scored five goals and has bagged four assists this season and will surely look to cap it off with some fine performances in the playoffs. Erik Paartalu has scored twice and has five assists to his name. His record may seem low in number, but given the poor form that the Blues’ have had in front of goal this season, his numbers seem to be highly impressive. Erik suffered an injury which kept him out towards the end of last season including the final triumph over FC Goa. He has been one of Bengaluru’s most important players this season and will be roaring to make an impact in the playoffs this time around. 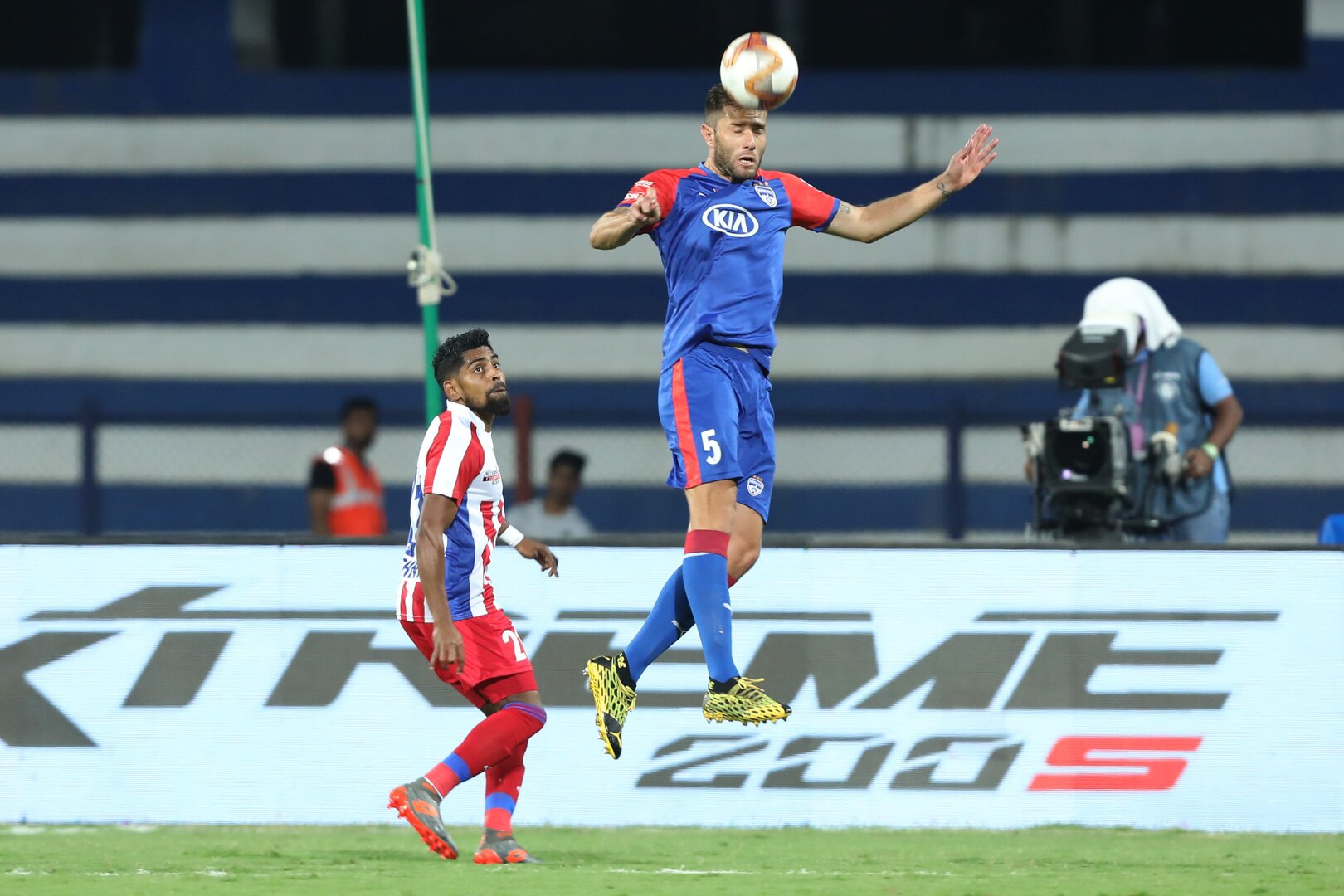 Bengaluru FC have conceded just 13 goals this season and have maintained 10 clean sheets, a true example of brilliance at the back. None of the strikers who feature among the top 10 goal-scorer’s list has managed to score against the Blues from open play. The side have silenced the best of attackers the league has to offer by a well-organized backline and perfectly executed offside traps alone.

Juanan, the Spanish center half of Bengaluru has been an absolute rock at the back and has lead the backline with great example. He hardly commits any errors and is a master at ball recoveries. Roy Krishna came up against the Spaniard on two occasions this season and managed to have just one shot on target and was caught offside thrice. The ATK striker is known to time his run to perfection and move into vital spaces in the final third whereas, Juanan is known for shutting down spaces and his impeccably timed tackles. The battle between these two players would definitely be the deciding factor in the semi-final.