There were some decent individual performers over the past week that make up the best eleven.

Past week’s action in the Indian Super League (ISL) was nothing short of entertaining, with some really important fixtures being played. ATK’s victory over FC Goa, Mumbai City FC outclassing defending champions Bengaluru FC and Odisha FC maintaining their winning streak after trouncing Hyderabad FC were some of the highlights.

Be it the domestic talents or the foreign contingent, the players delivered some memorable performances for their respective teams, helping them secure crucial points in the league table. Not only did the individual performances showcase improved quality of football, they made for a fantastic viewing as well.

Vishal Kaith was superb between the sticks for Chennaiyin FC and helped his side secure a clean sheet and all three points. The custodian saved six shots and commanded his area well in a fantastic performance.

Pritam Kotal’s brilliant performance was the cherry on top on a night where his team secured a crucial win over title-rivals FC Goa. The defender was solid at the back helping his side secure a clean sheet against a good team. He also made the most important contribution for ATK, which was to score the opening goal of the game.

Pratik Chaudhari was one of the key figures in the Mumbai City defence and did really well holding a strong Bengaluru side from scoring. Coming up against Sunil Chhetri and Co, the defender performed his duties well, looked calm under pressure and forged a good partnership with Mato Grgic. 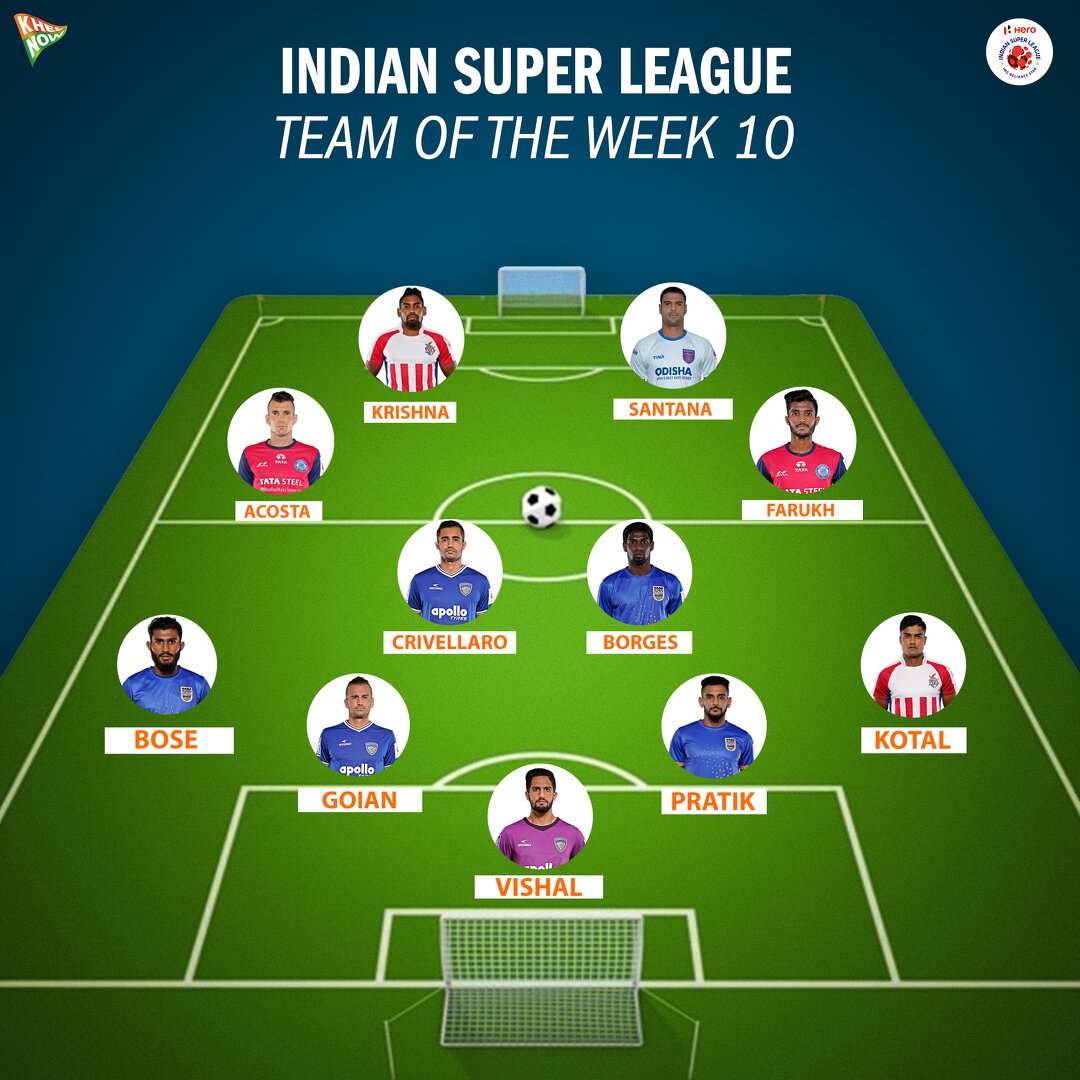 Chennaiyin were rock solid in defence and did not give NorthEast United FC many chances to score. Their leader at the back, the experienced Lucian Goian was the key figure, who led his defenders well. The 36-year-old tackled with authority, blocked the passing lines well and closed down any spaces for the opposition to exploit.

Subhasish Bose has been a consistent performer this season and he maintained his great run of form against a tough opposition in Bengaluru. The full-back was defensively astute, as he made six crunching tackles and made seven clearances.

Rowlin Borges was in the form of his life and delivered one of the most iconic performances in the middle of the park. The box-to-box midfielder was all over the field, protecting his defenders and contributing in the attack. Eight tackles, five clearances, created two good chances and an assist summed up his extraordinary performance.

Rafael Crivellaro was the main creative outlet for Owen Coyle’s men and was in a scintillating form for his team. To put his side in the driver’s seat, Crivellaro produced a stunner from long range. Overall, the play-maker had five shots on goal and three were on target. He also created three other goal-scoring chances for his teammates.

Farukh Choudhary is slowly making a case for a starting place in the Indian national team thanks to his consistently solid performances on the right wing. He was again priceless for Jamshedpur FC as he used his speed and silky skills to make space on the wing and deliver dangerous crosses inside the box. His work-rate and defensive input sets him apart from some of the best attacking wingers in the country.

Noe Acosta showed his versatility after starting in a more advanced role on the left wing against Kerala Blasters. The midfielder scored the opening goal and had several other chances to add to his tally. Perhaps the gaffer will give the play-maker another go at this position, considering the performance.

Aridane Santana scored yet again for Odisha and helped his side secure a fourth consecutive victory, helping them break into the top-four positions. With that brace, he is now the leading goalscorer of the ISL with eight goals to his name.

Roy Krishna was as usual a great influence for ATK as he turned provider instead of being the scorer this time around. The 32-year-old striker provided assists for ATK’s both goals against FC Goa. In fact, he could have contributed more from the total of six chances he created for his team. A brilliant overall performance from the lethal striker!