The Marina Machans will look to improve on their disappointing bottom-placed finish from last season.

The 2018-2019 campaign was a disastrous one for the Marina Machans, who finished in their worst ever league position at last place in the Indian Super League. Chennaiyin FC were found lacking in all areas of the pitch, following complacency and a few naive decisions on the part of the management. However, the south Indian side come into the new campaign vastly changed, with a fresh outlook, hoping to cause an upset in the title race. John Gregory remains at the helm of the outfit, despite the speculation surrounding his future at the club.

We at Khel Now, bring you a preview to the season of the two-time ISL champions.

Chennaiyin had a season to forget in the ISL, finishing in last place among the 10 competing teams. The South Indian side won just two games all campaign long, losing a massive 13 games in the process. CFC pinned their goalscoring hopes on Indian striker, Jeje Lalpekhlua, who found himself firing blanks all season. Couple that with their paper thin midfield and a defence that lacked cohesion and experience and you have a recipe for failure.

Midfield enforcer, Dhanpal Ganesh’s absence through injury left a huge hole in the squad, despite Gregory’s insistence that it would not change the way his side went about their business at the start of last campaign.

Chennaiyin FC held the first round of their pre-season in Ahmedabad, where they faced ARA FC, winning 1-3. The new signings, Andre Schembri and Nerjus Valskis were amongst the goals that day.

CFC lost to Mumbai and Jamshedpur 3-2 and 4-3 respectively, but beat Jamshedpur FC reserves 4-2. 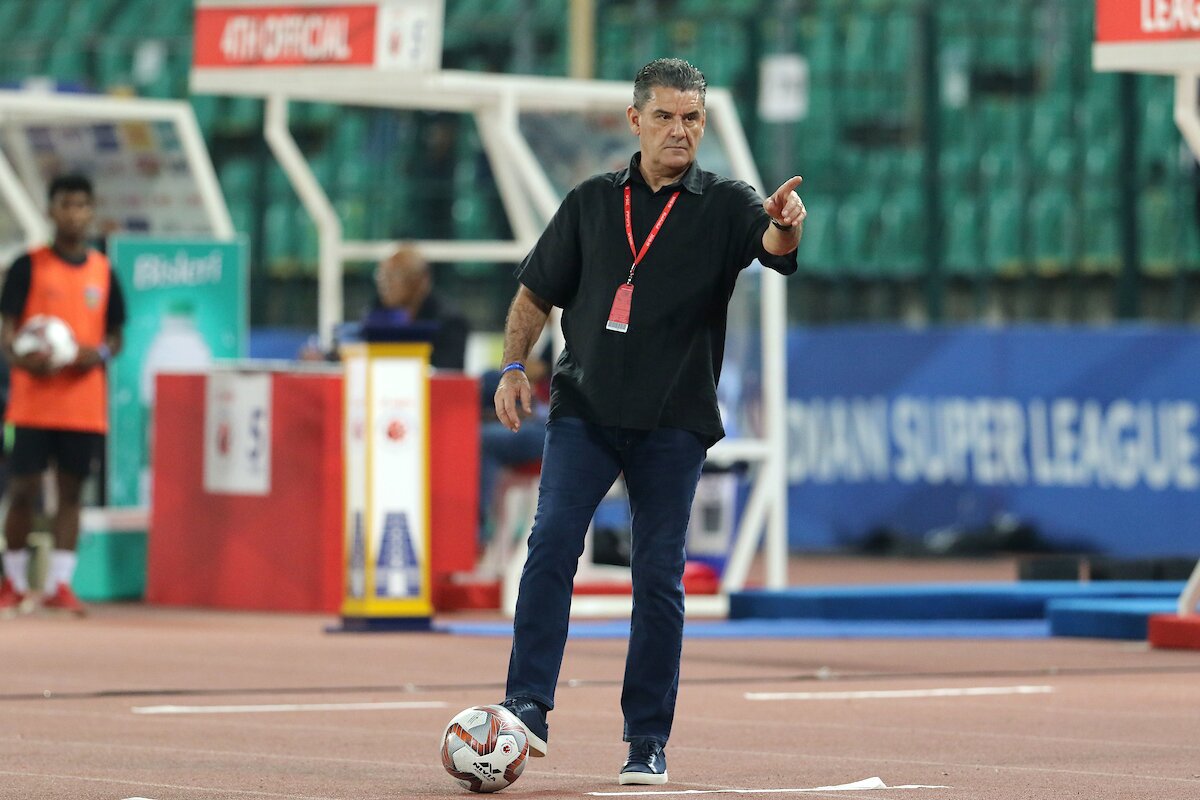 After much speculation surrounding the future of head coach, John Gregory over the course of the summer, the Chennaiyin board opted to keep the Englishman for the 2019-2020 season. Gregory will be joined by new Head of Medicine and Performance/Assistant Coach, Konstantinos Rostantis for the upcoming campaign.

Syed Sabir Pasha will continue as an Assistant Coach for the season. Gregory will hope to have a season reminiscent of his first at the club, during which he won the ISL title.

In a bid to turnaround their fortunes from the previous campaign, Chennaiyin FC have been quite active in the transfer market through the summer. The biggest churn has come in the Marina Machans’ overseas contingent. The club have retained only one of their foreign players from last season, adding six new ones.

During his side’s unveiling, Gregory expressed his disappointment in the performance of the overseas players in the previous campaign. Nerijus Valskis, Romanian winger, Dragos Fietulescu, Brazilian Rafael Crivellaro and pre-season top scorer, Andre Schembri have been brought in to strengthen the side in attack and midfield.

Perhaps the most high-profile of all CFC’s summer signings, Lucian Goian was brought in from Mumbai City FC to bring experience and quality to the backline.

Vishal Kaith was brought in from FC Pune City to replace Karanjit Singh, who has moved to a player-coach role for this season. Edwin Sydney Vanspaul and Lallianzuala Chhangte were brought in to add quality to the Indian contingent of the side.

Masih Saighani, Abhijith Sarkar and Prosenjit Chakraborty, round off the transfer ins.

This season will see a new-look Chennaiyin side take the field after the overhaul that the squad went through in the summer. Club hero, Raphael Augusto left to join ISL champions, Bengaluru FC in the summer. CK Vineeth and Holicharan Nazary also departed, following their short loan stints at the club.

Mailson Alves was part of the massive overhaul, not being deemed to be a part of his manager’s plans for the season. Mohammad Rafi, Issac Vanmalsawma, Nikhil Bernard, Chris Herd and Francis Bernard also took their leave from the Marina Arena. 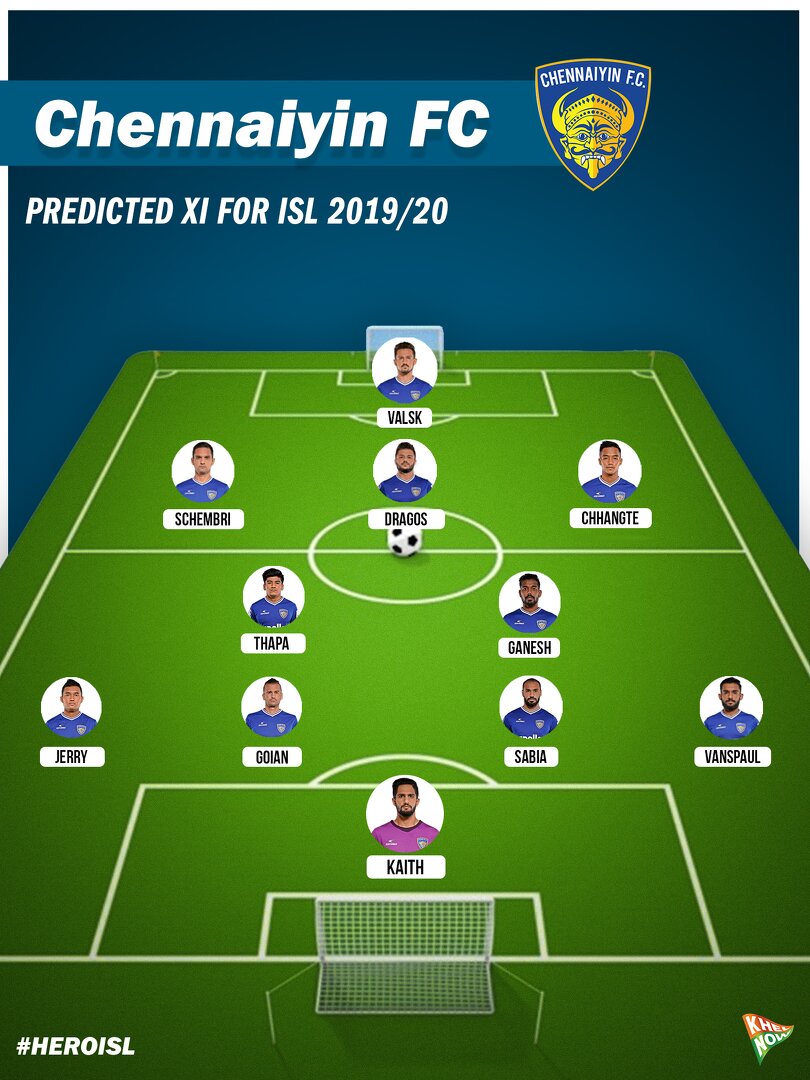 Chennaiyin FC operated in a 4-2-3-1 in their pre-season game, with Karanjit in goal. However, the keeper is likely to be replaced by Vishal Kaith in the ISL this year. Eli Sabia and Lucian Goian started in defence and should continue to do so, with Edwin and Jerry on the wings. The midfield three was made up of Germanpreet Singh, Dhanpal Ganesh and Thoi Singh.

Anirudh Thapa will most likely replace the latter in the league. The attack was made up of Dragos, Schembri and Rahim Ali, which is how it will most likely go on for the rest of the season.

The 21-year old, Thapa will be someone that CFC will look to build a team around and will be crucial in creating space in midfield, especially with the likes of Ganesh returning to provide cover for the energetic youngster.

Andre Schembri has already been amongst the goals in pre-season and will look to be his side’s primary goalscoring threat this season. The striker is powerful and feasts off of balls fed into the area, which is exactly what the likes of Dragos and Chhangte have been brought in to do.

Edwin Vanspaul, the local boy in the side, will be hoping that his usual marauding runs from right-back offer his team a little impetus that they lacked last season.

Chennaiyin FC look to be playing with a renewed vigour, especially in attack, having scored 13 goals in four pre-season games already. The massive squad overhaul seems to have worked with the new signings already making their mark on the team.

Ganesh’s return to the squad means that the Marina Machans have got their calming presence in midfield back, something that they lacked last season. Couple this with Thapa’s midfield industry and suddenly, last season’s weak core seems a lot stronger.

While the new signing, Schembri is doing wonders in front of goal, Lalpekhlua is still recovering from an injury that will keep him out till the start of the season. The “Mizo Sniper” only scored a solitary goal in the 2018-2019 season and looks badly out of form, leaving the goalscoring responsibility to the new signings.

With Sabia effectively being the only  remaining senior player from last season in defence, the Chennaiyin backline might take some time to get used to each other’s style of play, that could lead to a few defensive gaffes.

With six new overseas players coming into the team, Gregory has placed immense trust in the Indian players who were already at the club. The homegrown contingent of the squad will play a crucial role in shaping the team’s fortunes.

In Lucian Goian, the Chennai side have signed a leader who can galvanize a team when they are down as well as a top-class defender. The 36-year-old was a fan-favourite in Mumbai, but made the move south to take on a new challenge. Time will tell if he can recreate his MCFC form. Chhangte is one of the crop of exciting Indian youngsters that are tipped to take India to the next level as a footballing nation. The winger is fresh off of a trial at Norwegian club, Vikings FC and will be looking to prove a point back in his home country. Quite an apetizing prospect for the Marina Machans.

The Maltese icon has already been in the goals in pre-season and looks raring to go for his first campaign in the ISL. The attacker has an undeniable appetite for goals, something that is sure to endear him to the Chennaiyin faithful. Tickets to all of Chennaiyin FC’s games will be available to purchase on Book My Show.

Chennaiyin have made a good effort in overhauling the squad after the disastrous last season, but they are part of a rapidly growing league. The likes of NorthEast United and Mumbai City FC have strengthened immensely. However, CFC are the dark-horses of this year’s tournament. Should their new signings hit the ground running, a playoff spot would not be out of reach for the team from Chennai.