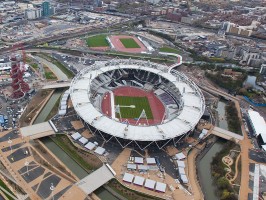 The Stadium at Queen Elizabeth Olympic Park, commonly known as the Olympic Stadium, is a stadium in Stratford, London, England, at Marshgate Lane in the Lower Lea Valley. It was constructed to serve as the home stadium for the 2012 Summer Olympics and Paralympics, hosting the track and field events and opening and closing ceremonies. The stadium is 6.5 miles (10.5 km) from Central London, and six minutes from the London St. Pancras rail station via Stratford International Highspeed rail services. Land preparation for the stadium began in mid-2007, with the official construction start date on 22 May 2008, although piling works for the foundation began four weeks before. The stadium held its first public event in March 2012, serving as the finish line for a celebrity running event organised by the National Lottery.[6] The stadium is being used intermittently whilst under renovation. As part of the renovation, the lower seating bowl will be replaced with a retractable seating system allowing for acceptable seating for both athletics and pitch sports. Once fully re-opened in 2016, it will have a capacity of 60,000[7] and will become the home of West Ham United Football Club and British Athletics. The decision to make West Ham United the main tenants was controversial. As well as its regular tenants, the stadium will continue to be used for a series of special events. The stadium hosted several 2015 Rugby World Cup matches, one test match of a tri-series between England Rugby League and New Zealand Rugby League in November 2015, and will host both the 2017 IAAF World Championships in Athletics and the