A couple of teams have shifted to new venues for the upcoming season.

The much-awaited fixtures and stadiums for the I-League 2019-20 season are finally out. The league was earlier set to start in early November, but 30th November is set to be the date of commencement.

The opening match will see former champions Aizawl FC take on Mohun Bagan at the Rajiv Gandhi Stadium, setting up the next ones nicely.

Gokulam Kerala FC will also take on NEROCA FC in their season opener, while defending champions Chennai City FC will face newly-promoted side TRAU FC in their first game of the season on 1st December. 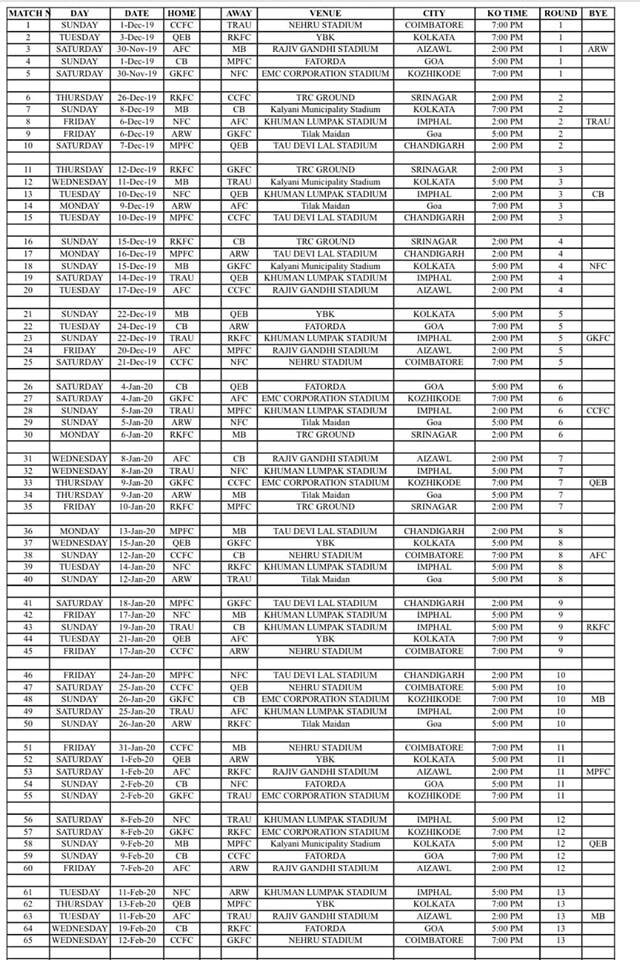 East Bengal will host Real Kashmir in what looks a mouth-watering first game for both sides, while Churchill Brothers and Minerva Punjab will also clash on 1st December. Indian Arrows are making their season bow relatively later on, when they host Gokulam Kerala at the Tilak Maidan in Goa.

The Southern Derby between title contenders Gokulam Kerala and Chennai City FC will also take place 9th January, while the Malabarians will travel to Kolkata in order to face Mohun Bagan at the Kalyani Stadium on 15th December and East Bengal a month later on 15th January.

Meanwhile, the defending champions will take on the Red and Gold Brigade on 25th January at the Jawaharlal Nehru Stadium, Coimbatore before hosting their rivals Mohun Bagan a week later on 31st January.

Real Kashmir will play in front of their faithful for the first time on Boxing Day 26th December, when they host defending champions Chennai City, in what will be a heated clash between the two.

There were questions raised about Real Kashmir’s home venue, as the Snow Leopards were reported to be shifting base from their TRC Ground. But, the club have clearly stated that they will play all their home games in Kashmir itself which is great news for their passionate fans.

Meanwhile, reports about the Kolkata giants shifting base to the Kalyani Municipal Stadium have been proven to be partially true, with Mohun Bagan registering the venue as their home stadium for the season.

On the other hand, Goan football fans will be busy, as Churchill Brothers are set to play at the Fatorda Stadium with Indian Arrows registering the Tilak Maidan as their home stadium for the season.

Manipuri sides TRAU and NEROCA will share the Khuman Lampak Main Stadium to play their home matches. Fans are eager to watch the Manipur Derby, which will be a different experience in Indian football.

Lastly, I-League 2017-18 champions Minerva Punjab, who have renamed their club as Punjab FC from this season will continue to play their home games at the Tau Devi Lal Stadium in Panchkula.

The fixtures have have been distributed in three different time slots (2PM/5PM/7PM) respecting various circumstances and keeping different aspects in mind.

Moreover, the 7 PM games will also see a return in the upcoming season. Some of them will also clash with the ISL(Indian Super League) fixtures which are predominantly played in the prime-time slot.

There is still no confirmed news on who will be the broadcasters of the I-League this season, even though D-Sports could be a potential home to the league this time around. But, with the schedule released officially, it won’t take much time before the broadcasting details for the league are also made clear.