The Islanders have dealt smartly in the summer transfer market and have all the bases covered in the squad.

Mumbai City FC had an eventful outing in the 2018-19 season of the Indian Super League (ISL), as they managed to qualify for the semi-final for the second time in their history. The Islanders finished third in the group stages and were pitted against an all-star FC Goa in the semi-final. However, a 5-1 loss against the Gaurs in the first outing ensured that they had little chance of a comeback in the second leg. Mumbai City went to Goa with positive intent, however, could not outscore the Gaurs on aggregate.

Since then, Mumbai City FC have decided to retain head coach Jorge Costa, intending to perform better than the previous campaign and bring silverware to the country’s financial capital.

In the following, we shall discuss about the determined Mumbai City side, along with their strengths, weaknesses, probable formations and more.

The Mumbai-based outfit had a positive outing last season, as they made it to the playoffs. In their 18 games in the group stage, they went on to score 25 goals, registering nine wins in the process.

The primary aim for Jorge Costa’s side this campaign will be to carry on the momentum and try to get their hands of their maiden league title.

Like many other teams, Mumbai City FC played their pre-season matches in India. The Blues played two pre-season games, one against Real Kashmir FC – which finished goalless. They also played against the recent Durand Cup winners Gokulam Kerala FC, which finished as a 1-1 draw. The Islanders also went on to play league rivals Chennaiyin FC at Jamshedpur, against whom they won 3-2.

At the time of writing, Mumbai City were yet to play two more pre-season games against Air India and Union Bank. The Islanders management decided to retain the services Jorge Costa for yet another season. The Portuguese tactician is expected to guide them to a better finish than last campaign. The ambition would be to challenge for the title and win it

Anthony Fernandes and Marco Leite will be the assistant coaches to Costa at Mumbai City FC in the ISL 2019-20 season. Pedro Correia will be acting as the goalkeeping coach to the Islanders this season.

Mumbai City FC have retained the core of their players from the 2018-19 season. In the summer transfer market, the franchise replaced the outgoing players efficiently, with major upgrades in a couple of positions. 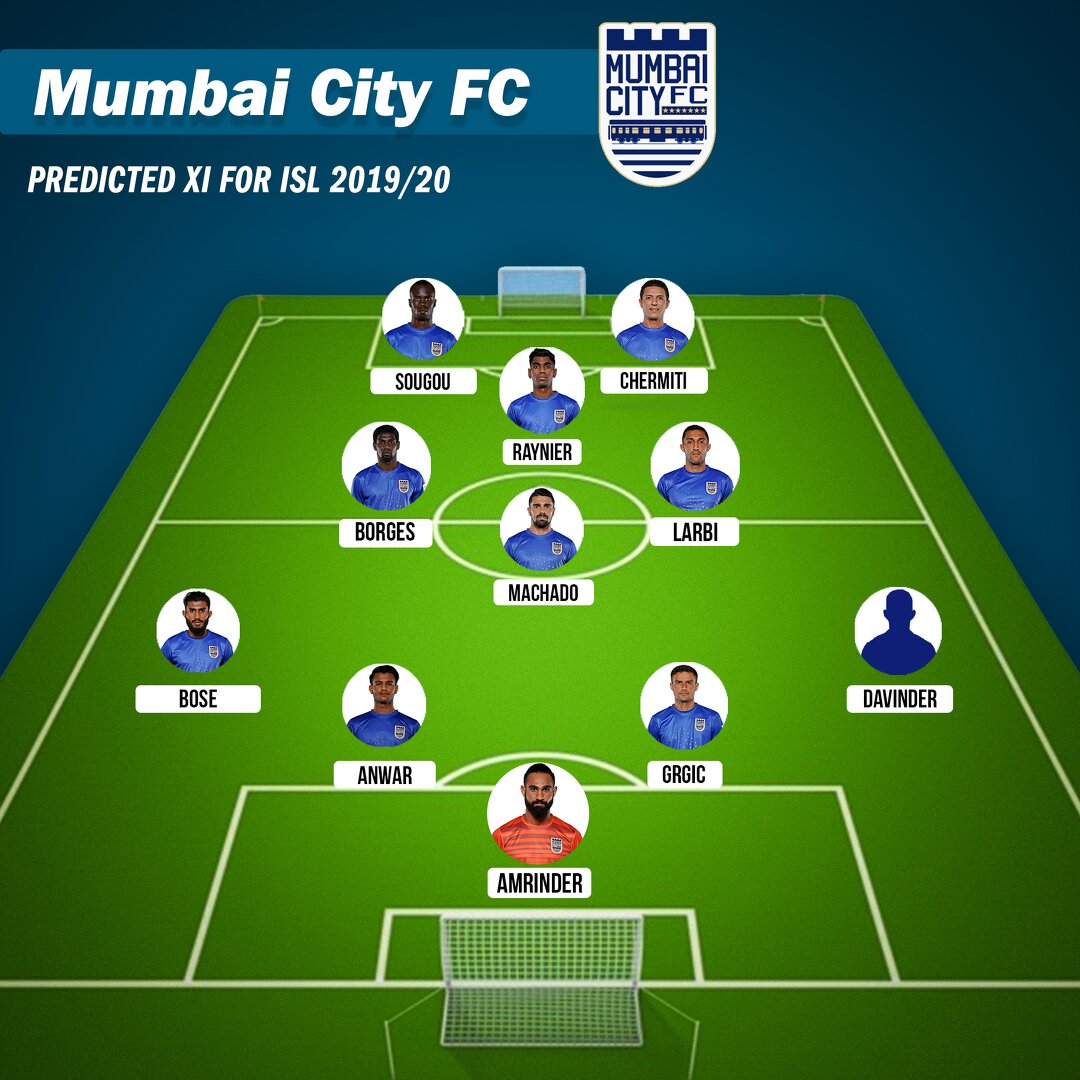 Jorge Costa prefers to play a standard 4-3-3. Amrinder Singh will once again guard the posts for the Islanders. Whereas Davinder Singh, Anwar Ali, Mato Grgic and Subhasish Bose will be taking care of the defensive setup of the team. Souvik Chakrabarti, Pratik Chaudhri, Sarthak Golui and Valpuia (Hmingthan Mawia) will come in handy as and when called up.

In midfield, the summer signings Rowlin Borges and Mohamed Larbi are expected to start, along with Portuguese Paulo Machado. Machado is expected to play as a defensive midfielder, whereas the former duo are expected to play in the central midfield roles. The forward line will consist of two strikers in Moudou Sougou and Amine Chermiti, while Raynier Fernandes will play behind them. 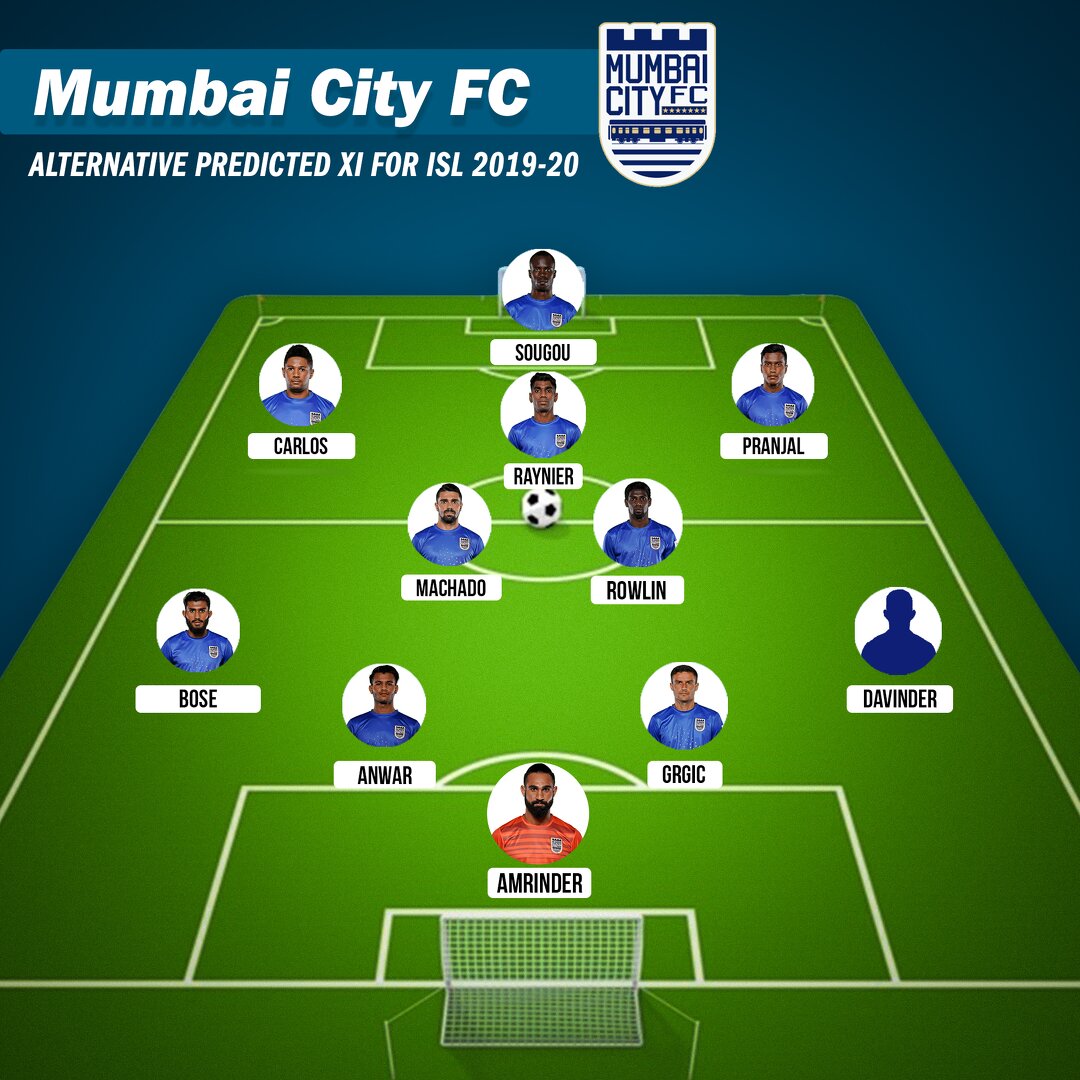 Looking at the squad depth, Costa may also be tempted to play the 4-2-3-1 wide formation, with Borges and Machado being the two defensive midfielders and Raynier playing behind the striker.  New summer signing, Diego Carlos along with star forward Sougou and young Indian prodigy Pranjal Bhumij will be the attacking trio for the Islanders in this shape.

Mumbai have almost all their bases covered and they have found like-for-like replacements or even better upgrades for those who left in the summer.

Mumbai City FC also has a very pacy forward line and are very quick on counter-attacks, which can hurt opposition defences.

There are two major areas of concern for the Islanders. Mumbai City FC do not have many quality full-backs in the squad. The current set of full-backs are not up to the level of the elites of the league. The second weakness is the lack of quality Indian forwards, which might force Mumbai to start their foreign attacking trio regularly.

Amrinder has been a great goalkeeper for the Islanders over the years. The 26-year-old custodian is not only a great shot-stopper, but is also a modern day sweeper keeper who likes to keep the ball at his feet. Amrinder has been named the vice-captain of the team ahead of the beginning of the league season and will be eager to make his mark and win his side’s maiden title.

The Senegalese notched up 12 goals last season and is expected to light up the Mumbai Football Arena once again this year. With his killer instincts and able support from teammates, he is certainly the player to watch out for.

Amine Chermiti is arguably the second-most high-profile signing in this season’s ISL after Asamoah Gyan. The Tunisian international was adjudged African Player of the Year in the year 2008. Chermiti has vast experience playing in various leagues across Europe and Africa. Chermiti is also one to look out for. With Costa at the wheel, a top-four finish looks very much in sight. The Mumbai outfit have signed a couple of exciting players who are hungry to make their mark this season.

Last campaign, Mumbai City FC notched up 26 goals in the tournament and with major upgrades this year the numbers are expected to go up further.