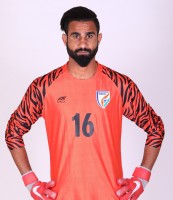 A product of the Punjab government-run Sports Wing Academy, this Mahilpur lad started as a striker before his first coach Yarvinder Singh, seeing his impressive build, decided to push him to goalkeeping, something that proved a turning point in his career. He excelled in goalkeeping in the under-17 and under-19 age groups and won the Dr BC Roy Trophy for Punjab. Pune FC grabbed him after that in 2011 and drafted him into their under-19 squad. At the age of 18, he got into Pune's first team. A big fan of former Real Madrid goalie Iker Casillas, Amrinder has not looked back since. His international club debut came in the AFC Champions league qualifiers. Amrinder's international career kicked off with the India under-23 team at the 2014 Incheon Asian Games. He was named captain for the 2016 AFC under-23 championship qualifiers in Bangladesh. Having been a regular for Atletico de Kolkata in Hero ISL 2015, Amrinder kept five clean sheets to bag the golden glove award. He would want to keep up with that form this year as well for Mumbai.