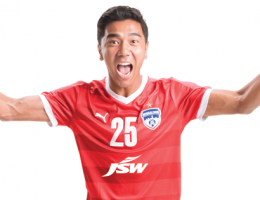 Daniel Lahlipuia is an Indian footballer who plays as a striker for Delhi Dynamos in the Indian Super League.

Having risen through the ranks at the Chandigarh Football Academy and the AIFF Elite Academy, 18-year-old Daniel Lalhlimpuia's major break came in 2015 when he signed for Bengaluru FC. Though he was largely restricted to AFC Cup appearances at Bengaluru, the Mizo striker didn't disappoint whenever he got an opportunity. The hard-working Mizo played a crucial role in guiding Bengaluru to their maiden AFC Cup final a year later and will be hoping to take his performances a notch higher with Delhi Dynamos this season.

In 2012 Daniel scored a stupendous 19 goals for Chandigarh Football Academy to become top goal scorer of the Administrator’s Challenge Cup. In 2013 he was inducted in the AIFF Elite Academy at Goa, where he stayed for the following 3 years before signing his first professional contract

In 2011 Daniel represented India U16 at the 2011 SAFF U-16 Championship where he scored 2 goals,including one in the final,which India eventually lost to Pakistan.

The same year he scored 3 goals in the 2012 AFC U-16 Championship qualification held in Tashkent and thereby securing India's qualification.

2013 Daniel was called up to the India U19 team for a preparatory camp in China, for the upcoming 2014 AFC U-19 Championship qualification in Doha.