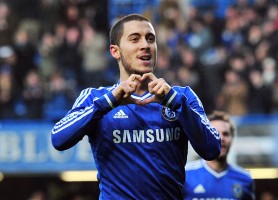 Eden Michael Hazard is a Belgian professional footballer who plays for Chelsea and the Belgium national team. He primarily plays as an attacking midfielder and a winger. Hazard's creativity, speed, and technical ability are widely acknowledged. He has been described as "a superb passer" and has earned critical acclaim for his playing style, which has led to the media, coaches, and players drawing comparisons to FIFA Ballon d'Or winners Lionel Messi and Cristiano Ronaldo.

Hazard is the son of former Belgian footballers and began his football career in Belgium playing for local clubs Royal Stade Brainois and Tubize. In 2005, he moved to France joining first division club Lille. At the age of 16, made his professional debut in November 2007. He went on to become an integral part of Lille under manager Rudi Garcia, racking up over 190 appearances. In his first full season as a starter, he won the National Union of Professional Footballers (UNFP) Young Player of the Year award becoming the first non-French player to win the award. In the 2009–10 season, Hazard captured the award again becoming the first player to win the award twice. He was also named to the league's Team of the Year.

Hazard is a Belgium international. Hazard made his senior international debut in November 2008, aged 17, in a friendly match against Luxembourg. . He has since earned over 60 caps.