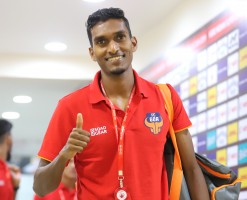 Lenny Rodrigues has established himself as the pivot of the senior Indian team and provided the backbone to his former club Churchill Brothers which went on a title-collecting spree during the lanky defensive midfielder’s six-year stint at the club. His forte is his range of passing skills of both the short and long varieties, which help make a seamless transition from defence to attack. His deft tackling and interceptions also help nip many an opposition attack in the bud. Starting off as a striker, Rodrigues began his career at the Salgaocar academy. But he refused a contract from Salgaocar to join Churchill Brothers, his favourite boyhood club, in 2008. The rest, as they say, is history. He joined Mohun Bagan at the start of the 2015/16 Hero I-League campaign and has been a part of FC Pune City since Hero ISL 2014. Rodrigues has made 19 appearances for the Stallions heading into the third edition.

Lenny Rodrigues notched up 795 minutes in his 10 appearances for FC Pune City in Hero ISL 2014. The next season was a mixed experience for the Goan as he played in multiple positions including an attacking one. The energetic midfielder made 10 appearances for FC Pune City in ISL 2016 and was an integral part of Bengaluru FC in 2017-18. He played 17 matches, scoring one goal and assisting one. The Goan returns to his home state to ply his trade under Sergio Lobera for the 2018-19 campaign.