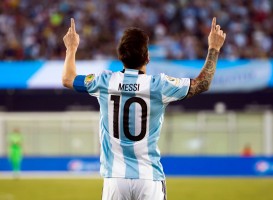 Lionel Andrés "Leo" Messi is an Argentine professional footballer who plays as a forward for Spanish club Barcelona and the Argentina national team. He is often considered the best player in the world and is rated by many in the sport as the greatest of all time. Messi is the only football player in history to win the FIFA World Player of the Year/FIFA Ballon d'Or five times, four of which he won consecutively, and the first player to win three European Golden Shoes. With Barcelona he has won seven La Liga titles and four UEFA Champions League titles, as well as three Copa del Rey titles. A prolific goalscorer, Messi holds the records for most goals scored in La Liga, a La Liga season (50), a calendar year (91), a single season (73), a Champions League match (five), and most Champions League seasons (five).

Born and raised in central Argentina, Messi was diagnosed with a growth hormone deficiency as a child. At age 13, he relocated to Spain to join Barcelona, who agreed to pay for his medical treatment. After a fast progression through Barcelona's youth academy, Messi made his competitive debut aged 17 in October 2004. Despite being injury-prone during his early career, he established himself as an integral player for the club within the next three years, finishing 2007 as a finalist for both the Ballon d'Or and FIFA World Player of the Year award, a feat he repeated the following year. His first uninterrupted campaign came in the 2008–09 season, during which he helped Barcelona achieve the first treble in Spanish football.