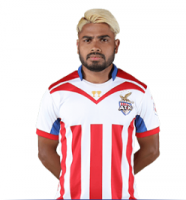 Prabir Das began his football career with Pailan Arrows. He was introduced as a striker but later flourished in the role of a defender and was slotted as a right-back. Nippy and muscular, Das likes to push up the flanks and deliver crosses and he is also a goal-scoring threat, having bulged the net on a couple of occasions for Pailan Arrows. He is an additional threat to the opposition during set-pieces. Following his stint with the Arrows, he shifted to Dempo SC, who finished as runners-up to Bengaluru FC in the 2015 Federation Cup. The temperamental defender's last match at the club would be one he would want to forget, having been handed a red card in Dempo's 1-2 loss to Pune. The Bengali has represented India at the under-19 AFC Asian Cup qualifiers in 2011 and even scored against Turkmenistan in his debut match in India's 3-1 victory. Das played an important role in ATK's title-winning Hero ISL 2016 campaign after being on the fringes for FC Goa and Delhi Dynamos FC in the previous two Hero ISL editions and will be hoping to do much of the same this season for the Kolkata-based outfits.