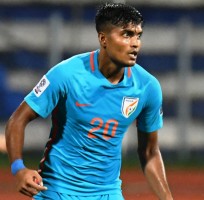 Pritam Kotal is an Indian International who plays as a right back for Delhi Dynamos in the ISL.

The versatile right-back can comfortably fit into any position in the defence. Pritam represented Chirag United in the under-14 Manchester United Cup, and Bengal under-19 as a defensive midfielder. The exposure paved the way for Kotal's transition to the junior India squad under Arthur Papas. The Australian gaffer had also groomed him at Pailan Arrows, where Kotal spent two seasons after a spell with Wari. Mohun Bagan signed him up in 2013-14 and the youngster seized his big chance by sealing his spot at right-back. There was no looking back for this technically gifted fan of Deepak Mondal, Syed Rahim Nabi and John Terry. Kotal is solid defensively and a constant threat while going forward.

Introduced to the game by his uncle at the age of four, the versatile right-back can comfortably slot into any position in the defence. The marauding fullback took the field on ten occasions for FC Pune City in Hero ISL 2014. In 2016, he played 12 matches for ATK in their title-winning campaign. For Delhi Dynamos last season, Pritam Kotal had his best offensive returns in a Hero ISL season scoring one goal and providing two assists, making him an automatic retention in the Delhi squad for 2018-19.

Winner, I-League 2014-15 with Mohun Bagan
Made India senior team debut against Nepal on 12th March 2015 in FIFA 2018 World Cup qualifiers
Played in the under-14 Manchester United Cup for Chirag United.