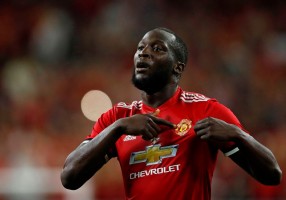 Romelu Menama Lukaku is a Belgian professional footballer who plays as a striker for Premier League club Manchester United and the Belgium national team. In January 2014, he was named by The Guardian as one of the ten most promising young players in Europe, and he is one of five players to score 50 Premier League goals before his 23rd birthday.

Lukaku started his career with local side Rupel Boom, before joining Lierse, where he earned a move to Anderlecht of the Belgian Pro League in 2006. Lukaku made his professional debut while still at school at the age of 16, and became the 2009–10 top scorer in Belgium as Anderlecht won the Belgian championship. He also won the Belgian Ebony Shoe in 2011. In the 2011 summer transfer window, Lukaku joined Premier League club Chelsea. He did not appear regularly in his first season there, and spent the following two seasons on loan at West Bromwich Albion and Everton respectively, signing permanently for the latter for a club record £28 million in 2014.

Lukaku made his senior international debut for Belgium in 2010, and has since earned over 40 caps. He has also represented the country at the 2014 FIFA World Cup.