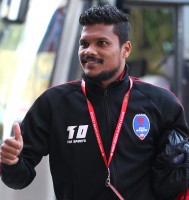 Romeo Fernandes played for Margao Sports Club in the 2010-11 GFA First Division League, helping the side to win the tournament and gain promotion to the Professional League. Dempo later snapped him up and he was a regular for Dempo Juniors, representing the under-18, under-19 and under-20 teams before making his debut for the senior side in 2011. He can play on both flanks and his ball distribution skills and passing ability are rated highly. He represented India at the under-22 AFC Asian Cup qualifiers and scored on debut against the UAE in a 1-1 draw in 2012. The youngster gave a good account of his talent in Hero ISL 2014 and found a legendary admirer in FC Goa coach Zico. The pacey attacker notched up three goals and two assists during his 11 appearances for FC Goa in the inaugural season. His newly earned reputation saw him join Brazilian side Atletico Paranaense on loan, thus becoming the first Indian ever to play for a Brazilian club. He returned to Dempo after his spell in Brazil and enjoyed a strong second season with FC Goa. Fernandes scored twice and provided four assists that year and cane up with two goals and two assists last year. Now with Delhi Dynamos, he will be looking to improve his end product.