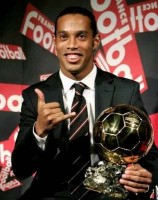 Ronaldo de Assis Moreira (born 21 March 1980), commonly known as Ronaldinho or Ronaldinho Gaúcho, is a Brazilian footballer. His main playing position is as an attacking midfielder or forward. He won the FIFA World Player of the Year award in 2004 and 2005. Renowned for his technique, tricks, dribbling, overhead kicks, no-look passes and free kicks, Ronaldinho is regarded to be one of the best players of his generation.

"Ronaldinho", the diminutive and term of endearment for "Ronaldo", is accompanied in Brazilian usage by the nickname "Gaúcho" (since he hails from southern Brazil), in order to distinguish him from fellow footballer and countryman Ronaldo, who was known as "Ronaldinho" in Brazil beforehand. Ronaldo went by his first name upon his move to Europe, thereby allowing Ronaldinho to drop the "Gaúcho" and go by the name Ronaldinho abroad.

Ronaldinho has played 97 matches and scored 33 goals for the Brazil national football team. He was an integral part of the 2002 FIFA World Cup winning team in Korea/Japan, starring alongside Ronaldo and Rivaldo in an attacking trio, and was named in the FIFA World Cup All-Star Team.

At club level, Ronaldinho played first for the Brazilian club Grêmio before spending the bulk of his career with European clubs Paris Saint-Germain, FC Barcelona, and Milan. He then returned to Brazil to play for Flamengo and Atlético Mineiro before moving to Mexico to play for Querétaro. With Barcelona, he won La Liga twice, the UEFA Champions League in 2006, and accumulated numerous individual awards, including the FIFA World Player of the Year in 2004 and 2005 and the Ballon d'Or in 2005. Ronaldinho was named in the FIFA 100, a list of the world's greatest living players compiled by Pelé, and to the FIFPro World XI from 2005–2007.