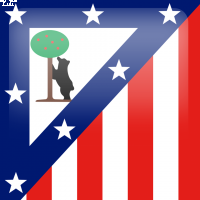 Club Atlético de Madrid, SAD commonly known as Atlético Madrid, or simply as Atlético, is a Spanish professional football club based in Madrid, that plays in La Liga.

In terms of UEFA competition titles won, Atlético Madrid is Spain's 3rd most successful club behind Real Madrid and Barcelona. In terms of the number of titles, Atlético Madrid is the fourth most successful club in Spanish football, behind Real Madrid, Barcelona and Athletic Bilbao. Atlético have won La Liga on ten occasions, including a league and cup double in 1996; the Copa del Rey on ten occasions; two Supercopas de España and one Copa Eva Duarte; in Europe, they won the European Cup Winners' Cup in 1962, were runners-up in 1963 and 1986, were European Cup runners-up in 1974 and 2014, won the Europa League in 2010 and in 2012, won the UEFA Super Cup in 2010 and 2012, as well as the 1974 Intercontinental Cup.

The club play their home games at the Vicente Calderón, which holds up to 54,960 spectators. In 2016, Atlético are due to move to their new home of Estadio La Peineta, which will have a capacity of 70,000. Atlético's home kit is red and white vertical striped shirts, with blue shorts, accompanied by blue and red socks. This combination has been used since 1911. The current club kits are manufactured by Nike and the main sponsor is Plus500.

Felipe VI, the current king of Spain, has been the honorary president of the club since 2003. The club co-owns the Indian Super League franchise in Kolkata, named Atlético de Kolkata, which won the inaugural season of the competition in 2014.