The seperation of the club and head coach has thrown up more questions than answers.

The news which shocked the entire Indian football fraternity on Friday was FC Goa parting ways with their head coach Sergio Lobera. The Gaurs have been in a great run of form and the brand of football they played under Lobera made them a neutral’s favourite team.

However things did not turn out well for the Spaniard after delivering the club’s first silverware last season. He had to leave the team which he moulded and nurtured for nearly three seasons.

The Gaurs reached the final of the Indian Super League last campaign, but missed out on the title thanks to a late Rahul Bheke winner. Yet, they came back strongly and followed it up with a brilliant triumph in the Super Cup.

Just when Indian football fans thought that Sergio Lobera and FC Goa are up for bigger and better things this season, the news came in. Moreover, assistant coach Jesus Tato Rodriguez and conditioning coach Manuel Sayabera, who are loyal to the Spanish tactician also decided to follow him out of the door.

Recently, statements came from both sides and interestingly there are clear signs of contradiction in the two. The official statement which came from FC Goa read:

“FC Goa can confirm that head coach Sergio Lobera, along with his assistants Jesus Tato and Manuel Sayabera and the club have mutually parted ways.”

Related: Revealed: Why and how FC Goa sacked Sergio Lobera

“The club would like to thank Sergio and his coaching team for their service over the last two and a half seasons and wish them well for the future. FC Goa won the Super Cup last year under his guidance and finished runners-up in the Indian Super League last season.”

Club president Akshay Tandon said, “I wish to thank Sergio and his team on behalf of everyone involved at the club for the work they’ve put in over the past few seasons. Our objectives when Sergio came in were to instil a style of football and build a platform on which we would move forward as a club and we managed to achieve that consistently.”

The statement from the Gaurs had a clear indication of how it was a mutually agreed call taken by both parties for the best interests of the club. However, the one issued by Lobera and company speaks a different story. 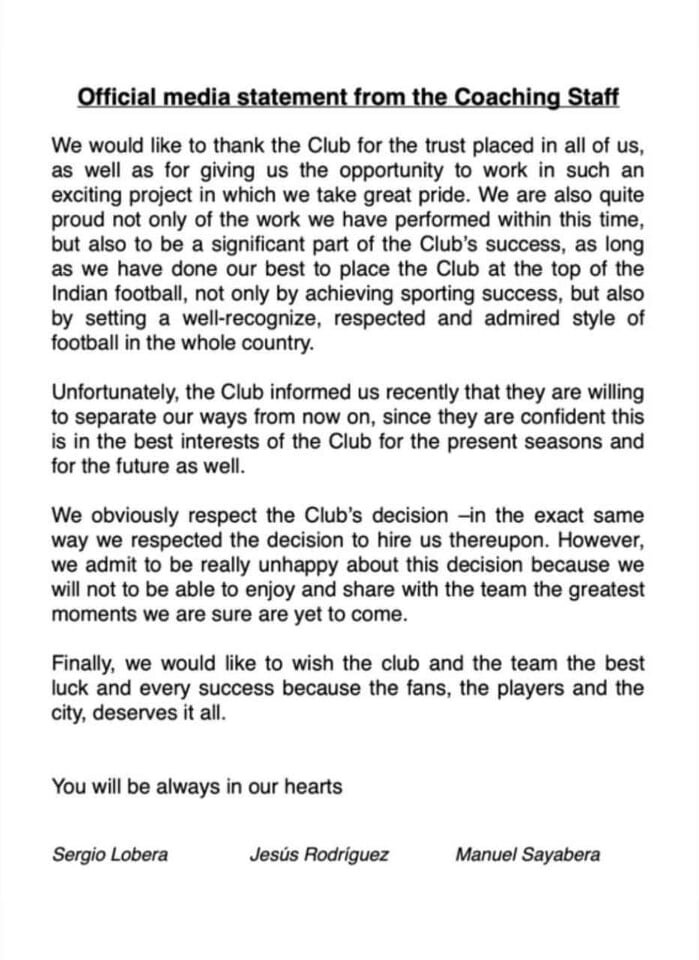 “Unfortunately, the club informed us that they are willing to separate our ways from now on, since they are confident this is in the best interests of the club for the present season and for the future as well,” the statement read.

“We obviously respect the club’s decision – in the exact same way we respected the decision to hire us thereupon. However, we admit to be really unhappy about this decision because we will not be able to enjoy and share with the team the greatest moments we are sure are yet to come.”

Lobera and his support staff invigorated a different style of play in Indian football, which was soothing to the eye and at the same time very effective. The Gaurs scored the most number of goals for the past couple of seasons and have maintained that feat this season as well. Therefore, they feel hard done by the decision, as this side can achieve great things in future which they won’t be able to cherish. This clearly shows that it was not a separation by mutual understanding and there were several issues at play.

Lastly, it will be interesting to see how the Gaurs perform from here on as they challenge ATK and Bengaluru FC to finish top of the table in the league and be the first Indian club to play in AFC Champions League group stages.