Jorge Costa’s men are on the cusp of qualifying for the playoffs once again this campaign.

Mumbai City FC have had a peculiarly inconsistent season so far, and yet, they are currently conveniently placed in the fifth spot, merely two points behind Odisha FC. However, crawl back merely some weeks ago and this very side had managed to register only a single victory in their first seven games of the campaign.

Three victories in a row a few games ago ensured that the team managed to climb up the ladder. They now look to be closely contesting to qualify for the semifinals if they manage to keep up their positive momentum attained after an emphatic victory over Bengaluru FC in Mumbai. But considering that there are still five matches due for them prior to the conclusion of the league stage, it is necessary to ponder upon whether the Islanders have really been successful in turning a corner in their inscrutable season thus far.

Deciphering The Reasons Behind Contrasting Fortunes

Despite an influx of some really qualitative players in the transfer window, Mumbai were hit at the very start with injuries to first-team players whom they simply couldn’t afford to lose. Mato Grgic pulled out within the first half of their opening game and that left Jorge Costa with an all-Indian back-line to play with. Moreover, Rowllin Borges has missed some games too and that has left the defensive line completely exposed especially in the initial two home matches against Odisha FC and FC Goa.

With these two teams generally preferring to play an expansive style of game with the ball, the midfield was easily bypassed with Raynier Fernandes being shunted to a deeper role to prevent the same. Being an attacking midfielder originally, Fernandes struggled to carry out this task and thus Mumbai leaked eight goals in those two matches itself. Moreover, Modou Sougou suffered an injury that left the side really light in all aspects of the field for some time in the beginning of the campaign.

However, of recent, Mumbai have won four of their last six matches and that isn’t just a result of injured players recovering back from their fitness issues. Over the course of the season, one can see Costa’s overall philosophy being implemented more clearly and hence the side is able to bag the required number of points despite facing some or the other complications in each game. They sneaked out three points against Bengaluru FC through a late injury-time winner, completely decimating the defending champions and eventually coercing them to drop their shoulders to gradually accept their defeat during the course the ninety minutes a few days ago.

In the last game of their previous calendar year, they managed to hold on to a win despite Sarthak Golui being sent off with almost 25-30 minutes of play remaining to take place against Hyderabad FC.

The nature of these two wins, the first against Bengaluru and then the victory against Hyderabad, display completely opposite paradigms of Mumbai’s game-play. Costa has always set up a team that is pragmatic, yet effective and efficient in its approach at Mumbai. Lack of discipline in arranging the defensive lines, or committing ‘silly’ mistakes as he often reiterates in the press conferences, is what irks him the most.

As the season has progressed, they have somewhat managed to minimise those errors and have rather compensated it with greater efficiency on the goal-scoring front. Out of the 19 goals that Mumbai has scored so far, 13 different players have contributed to it. This shows that unlike last time around, no single player has the burden of this responsibility.

Modou Sougou scored 12 goals in total last season and Amine Chermiti is their highest goal-scorer this time around with five goals. Thus, many different players managing to put the ball behind the net demonstrates the fact that Mumbai can now score from a vast variety of situations that arise on the football field; ranging from corners, to free-kicks to goals from the open play. 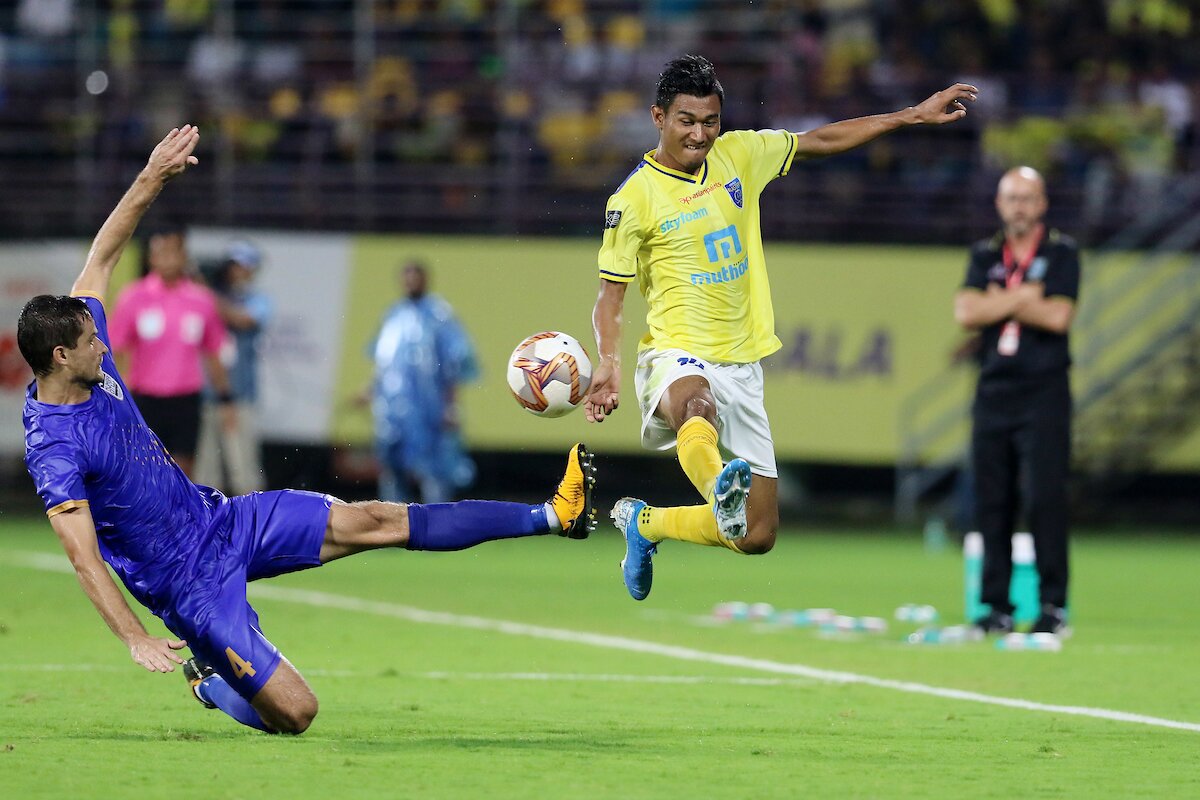 Mato Grgic seamlessly settling in to the heart of the back-line has further strengthened their defensive line too. For, not only has it provided Costa with a senior, calm influence at the back; it also allows Golui to play at right-back replacing Sauvik Chakrabarti who is probably the weakest link in the defence.

There are not many major differences to make, the glaring ones rather, between Mumbai’s poor form at the start of the season and their revamped version currently. It is more of a process that has unfurled in front of our eyes, with Costa’s strategies, the ideologies being executed with much more precision as the initial phase of doom has dwindled. It is a case of a team that has evolved over the course of the past few months. A team that has gotten into a position where they currently look well-settled enough to pile on the necessary number of points.

Sustainability of this kind of form would be the only question in the minds of the viewers and rightly so too.

Consistency Is The Key

Why one needs to ponder upon this thought is also because of the fact that Costa’s men didn’t really start 2020 on a positive note. ATK left them completely flabbergasted with their sheer flamboyance and flair. Later on, Mumbai travelled to Odisha to endure, what the coach later went on to claim as, the worst game during his stint with Mumbai City FC.

The Islanders have a relatively easier run of fixtures ahead of them, as barring the away fixture against FC Goa, they would be facing all sides who are currently placed below them in the points table. Odisha, who are Mumbai’s closest competitors in the league for the playoff spot right now, would face the likes of Bengaluru FC, FC Goa and ATK in their next three matches respectively.

If  Josep Gombau’s side drop points in the aforementioned encounters and Mumbai are successful in accumulating three points in each of their next few games for the time being, it would also reflect upon the notion that Mumbai would end up as the better of the two teams with respect to gaining victories in matches against the lower-ranked teams.

Making Up For The Loss Of Paulo Machado

A major setback has to be the loss of Paulo Machado’s services for the entire season. Hence Rowllin returning back to play as the defensive midfielder for a stretch of matches is of utmost importance currently. Moreover, the team really requires an anchorman in the midfield who is able to spray passes and control the pace of the game right from the centre. Mohamed Larbi slots well into that role and he has carried it out quite well in Machado’s absence so far.

Sourav Das formed a brilliant pivot with Borges at the centre of the park in the previous match against Bengaluru. It also allowed the latter to play in a slightly more advanced position, hence delivering the long passes that resulted into both Sougou and Chermiti’s goals ultimately.

Is this the best goalscoring start to a season in the history of ISL?

Chhangte, Roshan headline ISL 2021-22 Team of the Month for November

This combination also added further steel and solidity to Mumbai’s midfield, as they were successful in obstructing Bengaluru to control and alter the pace of the game through the midfield. Whether or not Costa persists, this partnership remains to be seen, because it implies leaving Raynier out on the bench. This deprives the team of their defining attacking spark from the offensive midfield.

Eventually, it is obligatory to acknowledge that Mumbai City FC are gaining steam at a point of the season where other teams might be on the verge of losing it. The more they are successful of cashing into this phase, the better results would it yield for them come the business end of the season.