Saying that the year that has just passed was ‘eventful’ would only serve as an understatement to the actual course that proceedings took. Underdogs delivering upsets, legendary players hanging up their boots, young talents making their mark, the year witnessed it all. Interestingly, several legendary players called time on their coveted careers in 2019 and we could actually make out the ‘Best Retired XI’!

Needless to mention, Liverpool shocked the whole world by making it all way to final of the Champions League, and more surprisingly, only had to beat Premier League rivals Tottenham Hotspur. In the other all English final, Chelsea and Arsenal played out the Europa League final, with Maurizio Sarri delivering a trophy before going on to join Juventus.

Manchester City, Barcelona, Juventus, Bayern Munich, PSG and Ajax, all secured their respective local leagues – some with a little more conviction than the other. While the Premier League and Bundesliga were decided effectively on the final day, the Ligue 1 and Serie A weren’t close by any stretch of the imagination.

Through all this though, football lost some of its most influential and renowned names over the course of the year 2019 and here is our compilation of the best Retired XI –

The Czech international goalkeeper finally hung up his boots at the ripe age of 37, after an illustrious career that stretched to just under two decades. His exploits with Chelsea are what he’s most renowned for – including key saves in their Champions League final penalty shootout against Bayern Munich.

Yes, the Frenchman was probably one of the deadliest left-backs in the world during his prime. But the presence of an even bigger personality means that he’ll have to do with a place on the right flank. With that said though, considering the vast experience the former Manchester United man has had, he’ll do just fine anywhere across the pitch.

Another cult hero at the Theatre of Dreams, former Manchester United centres-half John O’Shea also retired at the end of last season. He won five league titles and a Champions League during his time at United and can currently be found at the Madejski stadium, working as the assistant manager at Reading.

The Juventus veteran hung up his boots after an extremely colourful career, at the end of last season. The former Wolfsburg and Palermo man spent the last eight years of his career in Turin and has since taken over the role of technical coach for the Old Lady.

The Englishman played the final year of his career under the tutelage of Frank Lampard at Derby County. Once a Chelsea legend in the same team as the current Blues’ gaffer, Ashley Cole is widely considered to be one of the greatest modern day left-backs the world has seen. 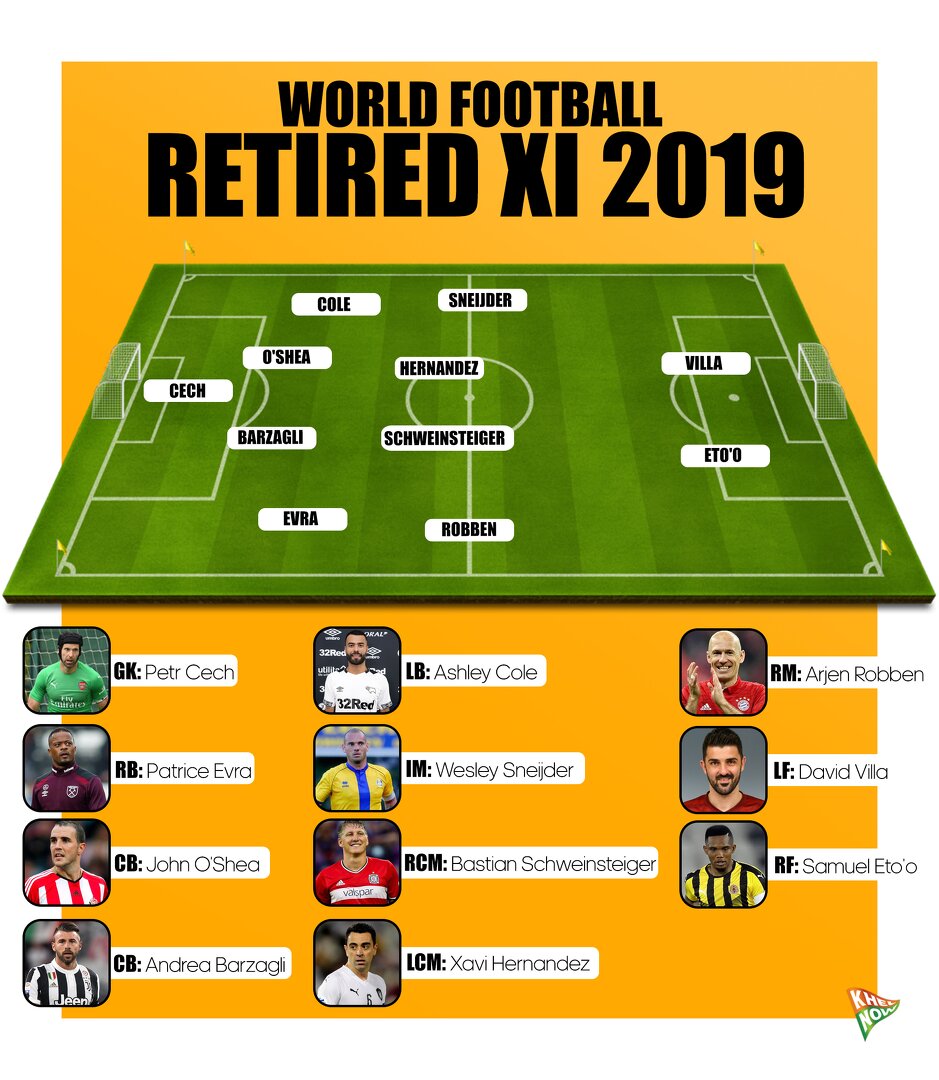 A player who was linked with a move to Manchester United every passing summer – the Dutchman had an extremely illustrious career with the national side, but was renowned for his exploits with Real Madrid and more importantly Inter Milan.

The German legend is still plying his trade in the USA, but is set to hang up his boots at the end of the year. A former Bayern Munich academy product – he appeared in around 500 fixtures for the German giants and even had a stint at Manchester United.

Often described as one of the greatest midfielders of the generation, the Spaniard’s exploits in the core of ‘that’ Barcelona team was the stuff of legend. He has also been an integral part in Spain’s back-to-back Euro and World Cup double, a few years back.

Another Dutchman is this talented list – Arjen Robben was one of the greatest wingers to grace the beautiful game. His trademark skill of cutting in from the right and firing a curling ball with his left boot has resulted in so many memorable goals.

Top 10 goalkeepers with most clean sheets in Premier League

The former Barcelona striker was part of the Catalan front-line consisting of Lionel Messi and Pedro – the same front-line that terrorised European football with their unbelievable play. The Spaniard won the FIFA World Cup with Spain and then every trophy possible with Barcelona.

The Cameroonian international had an extremely celebrated career, having won the Champions League in three occasions with four different clubs. He’s won league titles in Italy and Spain and has even been at Chelsea towards the end. Eto’o makes the cut ahead of his former teammate Fernando Torres, considering his wealthy contribution to the clubs he has played for as well as for the national team.