The People’s Club have lost some of their key players from last season and it will be interesting to see how they fare in their absence.

Since scripting the biggest fairy-tale story in Indian football in 2017, when they became the I-League winners, the subsequent journey for Aizawl FC hasn’t been easy. It did not make for good viewing, when, apart from finishing both subsequent seasons in mid-table mediocrity, they also had to undergo a change of coach midway through the term. But, like anywhere else in the world of football, the new season  brings in a new dawn of hope for Aizawl FC and their band of ever-loyal supporters .

In this piece, Khel Now conducts an in-depth analysis of the club, the personnel and everything you need to know ahead of the 2019-20 season.

Aizawl FC had a poor start in their opening stretch of games, losing five of the eight and were bottom of the table when they were beaten by Indian Arrows at home at the beginning of the year. The defeat against the Arrows proved to be the final nail in the coffin for coach Gift Raikhan, who resigned following that game. Former East Bengal and Mohun Bagan coach Stanley Rozario replaced him for the remainder of the season.

The results under the new coach improved considerably, as the People’s Club pocketed 15 points from the final nine games, including three wins on the trot in the final three matches. The late thrust propelled Aizawl FC to a face-saving 7th place finish.

Like every year, this time too Aizawl FC are taking part in the Mizoram Premier League, a traditional curtainraiser to the domestic season for the People’s Club. Currently, 11 rounds of the league have been played and Aizawl FC are top of the table with 24 points, already assuring themselves of a semi-final spot.

They also participated in the Independence Cup in August, which ended in disappointment for them in the semi-finals, as they lost  to FC Venghnuai. When Aizawl FC parted ways with Gift Raikhan mid-season, they sat at the bottom of the table with just nine points from 11 games. The job then went to Stanley Rozario on an interim basis and it proved to be an inspired piece of business. The 59-year-old got the team out of their rut and secured their league status for the next season. Rozario presided over nine games, which included impressive performances against more formidable opponents like East Bengal and Churchill Brothers.

Impressed by the good run of form, the Aizawl FC management rightly awarded Rozario a contract extension upto 2021. The former assistant to Bob Houghton with the national team, has a wealth of experience in Indian club football. Apart from managing both the Kolkata giants, he has also had stints with other I-League sides like Salgaocar, United Sikkim and Shillong Lajong FC. With Lajong he had a particularly memorable tenure, guiding the young side to the final of the 2009 Federation Cup.

Having impressed in his new job so far and possessing a good track record of working with young northeastern players, the Bengaluru-born coach is looking like a solid appointment for Aizawl. Known to profess an attacking style of play, Rozario would now look to build an identity with the young talent at the club.

Staying true to their philosophy of blooding their own young talent, Aizawl FC have promoted a host of their players from the junior side to the first-team. At the time of writing, William Lalnunfela and Kingsley Obumneme moving from Mohun Bagan are the only two arrivals into the first-team from outside the club. Both of them were members of the historic title winning side of 2017 and are making their return to Aizawl.

The top scorer from last term, Ansumana Kromah has left for Peerless SC in the close season. The other two first-team regular foreigners Kareem Nurain and Leonce Dodoz Zikahi have joined Mohammedan SC and Bhawanipore FC respectively. A few of the talented Indian boys at the club have also left for greener pastures elsewhere. Amongst them are Gurpreet Singh (TRAU FC), Hmingthanmawia (Mumbai City FC), Lalrinchhana (Minerva Punjab) and Mapuia (Churchill Brothers).

Coach Stanley Rozario has mostly lined up his side in a 4-4-2 in pre-season, with captain Alfred Jaryan playing just behind Remsanga as a second striker. The Liberian, with his strength and ball-winning skills, can be asked to drop even deeper to add depth to the midfield.

The two talented young wingers Rochharzela and Isak will most likely man the right and left wing respectively. Paul Ramfangzauva and Hmangaihkima have regularly started in the middle of midfield and can expect a similar role in the I-League. Paul is the deeper-lying of the two midfielders, while the latter with his ball-carrying abilities will be entrusted to link defence with attack.

In the centre of defence, Ugandan Richard Kassaga will most probably partner new signing Nigerian Kingsley Obumneme, who will be playing his fourth season in India. The two pacy full-backs Lalbiakzuala and Joe Zoherliana would round off the back four.

The reliable Lalawmpuia who garnered praise for his performances last season, is expected to be the first-choice between the sticks for the campaign.

Aizawl FC struggled in the last two seasons primarily because injury woes didn’t let them have a settled backline, having had to constantly shuffle between personnel. With the recruitment of Kingsley, they now have two tall and strong centre-halves, each in the prime years of their careers. A tough gruelling challenge like the I-League season needs a solid defence upon which further success can be built. If this partnership can stay injury-free, Aizawl FC will be a tough side to play against.

Also, the team’s pace and trickery on the wings, provided by both the wingers and the full-backs, can lead to a lot of chances being created in the final third.

Out of the 27 goals scored by Aizawl FC last season, Ansumama Kromah, Mapuia and Leonce Dodoz combined for 18. With all three having left in the close season, the club are short of quality up top. The hunt for goals will be spearheaded by the 20-year-old Remsanga, who is having a great run in the Mizoram Premier League. But, since the I-League is quite a notch above in terms of quality, the youngster’s inexperience might be somewhat of a drawback for the team. 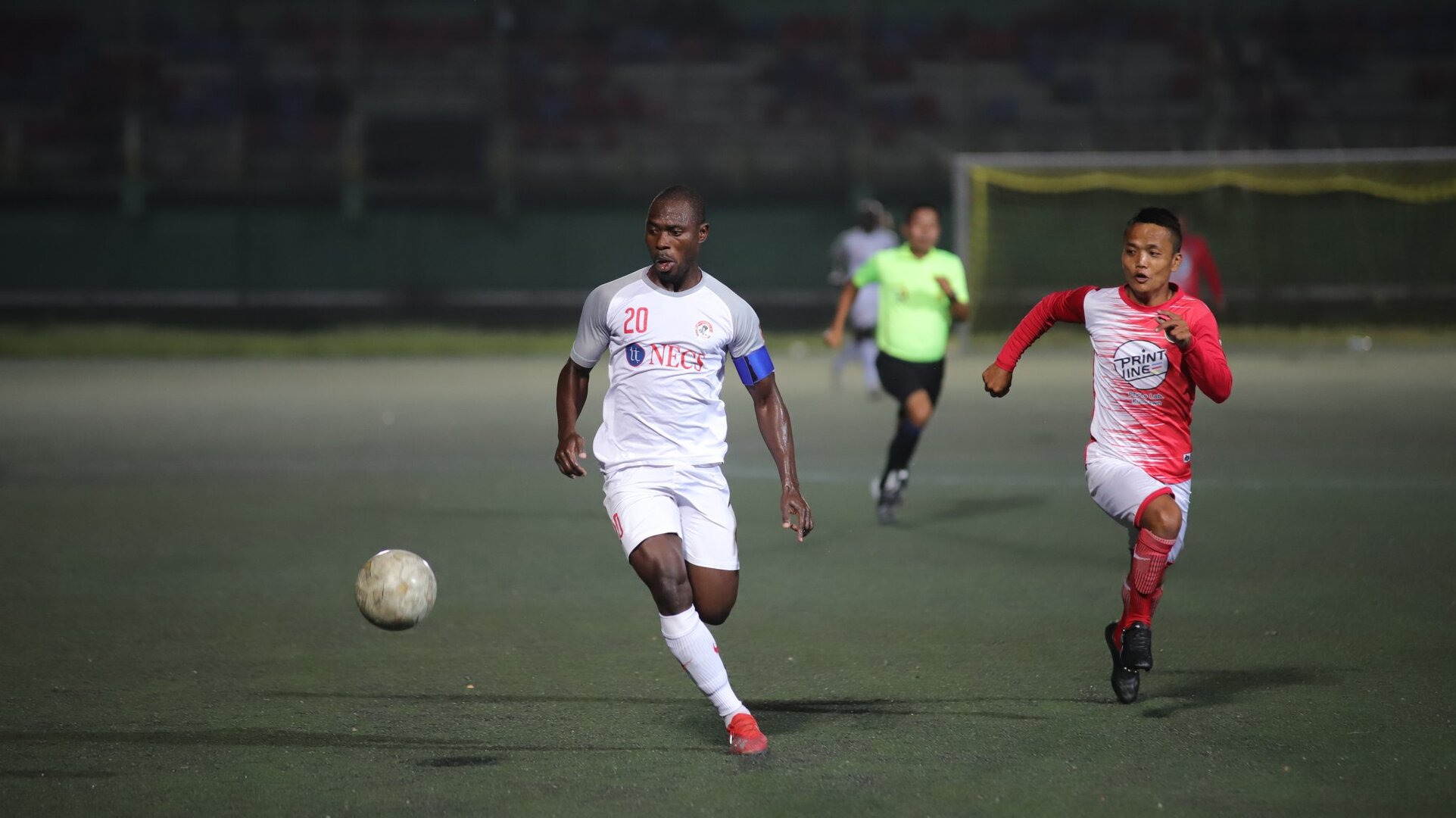 They call him ‘The General’ at Aizawl and the fans are delighted by the fact that their skipper has decided to put pen to paper for yet another season. Jaryan seems to be in good nick before the campaign, having already bagged seven goals in the ongoing Mizoram Premier League. He would be looking to make amends for a poor last season, which was marred by an injury that sidelined him towards the term’s end.

The big Ugandan arrived in Aizawl in the middle of last season and with his inclusion, the fortunes of the team have changed for the better. The 6’2 tall 26-year-old is a former Ugandan international, having played for the Cranes on four occasions. Kassaga is quite a presence in the heart of the back four and is also a threat from set-pieces.

Alejandro Menendez: Past records cannot predict the outcome of derby

The 18-year-old young winger is one of the most exciting talents to emerge from this part of the country and has recently been rewarded with a call-up to the Indian U-19 camp. Blessed with great technical ability, Isak notched up two goals in the league last season and this might be the year he makes everyone take notice.

With a number of exciting young talents in their ranks and a few quality foreigners donning important roles, Aizawl FC are equipped to do better than their last two seasons. Under a coach having such impressive an experience of the competition and also working with young talents, Aizawl FC should be quite a competitive team this campaign.