The Reds defeated the Blue Tigers with two late goals in Guwahati earlier this year.

Is this an aberration, or can India be expected to play this system in the long-term? How effective will it be for India in the upcoming crucial encounter against Oman? The question lingers in the mind of every Indian fan, but let’s move on to the next game.

After the late rescue act from Adil Khan in the World Cup Qualifier against Bangladesh, Seminlen Doungel jumped higher than anyone else in the Afghanistan box to steal another 1-1 draw for India. India stand fourth on the table, with three draws and one defeat in four games.

Moving ahead, India face Oman, the team they lost 1-2 against in Guwahati on September 5 earlier this year. Sunil Chhetri had started the scoring in Guwahati with a sweet ball from Brandon Fernandes, who has also provided for the only other two goals India have scored in qualification. India will need to find their scoring boots to ensure they keep their chances open, given the marauding form Oman are in.

They brushed aside the challenge from Bangladesh, winning 4-1 on 14th November in Muscat. The team is in a rich vein of form and have lost just once in five outings, against the AFC Asian Cup holders Qatar earlier in these qualifiers.

India have implemented Croatian boss Igor Stimac’s passing football and the players are slowly getting better at it. The team, though, have a problem. They still depend on horizontal passing a lot more than vertical and thus, players like Amarjit Singh Kiyam are being sorely missed.

India’s maximum passing in the last encounter against Afghanistan was between Adil Khan and Rahul Bheke – 41 passes – which is a regular feature of most teams that play the possession-based game. Bheke to Pritam Kotal was second at 32 and Kotal to Pronay Halder stood third at 24. The only positive was Brandon Fernandes’ 21 exchanges with captain Sunil Chhetri, the only forward passing combination India attempted for the entire duration of the match. 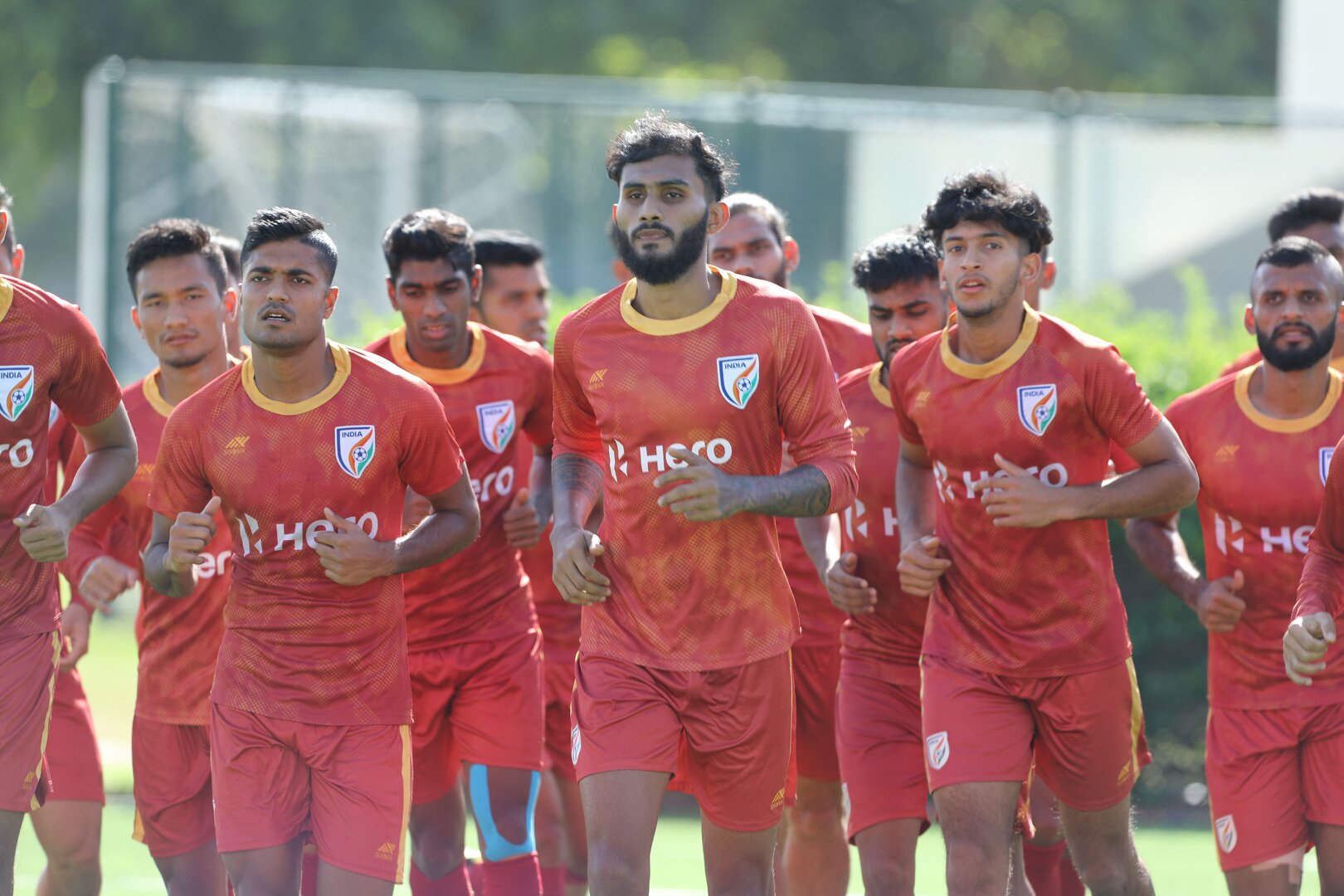 India need their midfielders to find the forwards more. They need to be more confident on the ball and players like Sahal Abdul Samad need to produce more than just a “moment of magic” here and there. At No. 10, the Kerala Blasters midfielder holds a key role, but is usually absent from his position, probably due to the freedom provided to him by Stimac.

India have lost to Oman previously in the qualifiers and need to win this one to ensure they keep the door to the top-two open. The team played extremely well until the 80th minute in Guwahati, when they conceded two late goals (82’ and 90’ minute) to give away all three points. With better ball retention and positional awareness, the Blue Tigers have the acumen to pull off the unrealistic.

Buoyed by an attack-minded tactician in Erwin Koeman, Oman will use the home advantage to collect three points against India. If Oman win their next game in the qualifiers, it will put them firmly in the driving seat to qualify for the final qualifying round. 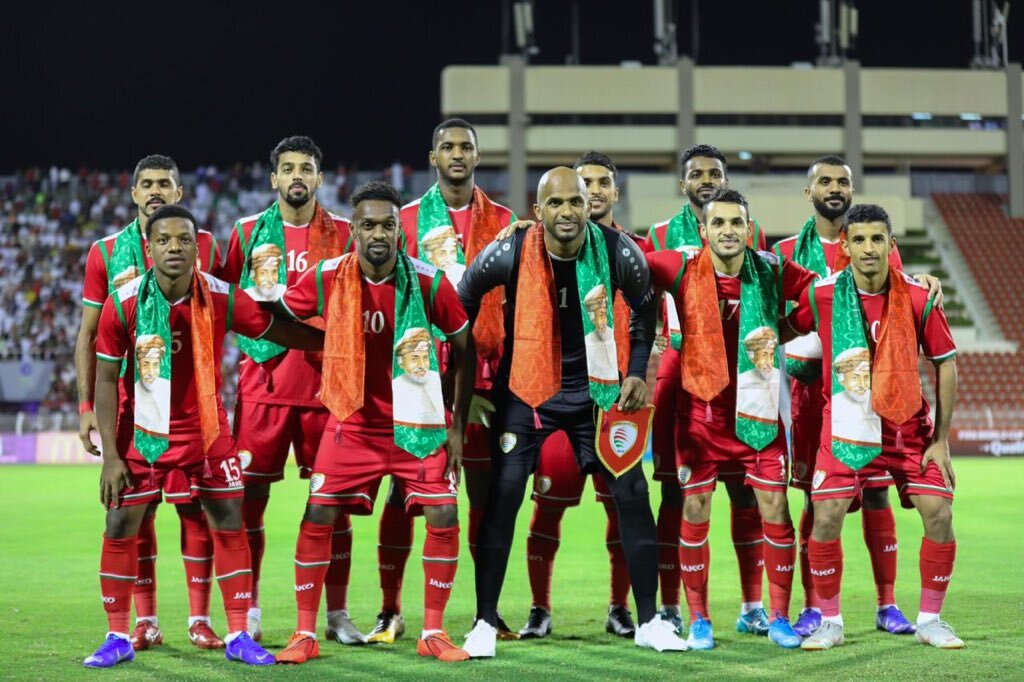 As per the current FIFA rankings, Oman are placed 84th on the table, gradually nearing their best-ever rank of 50. Koeman’s appointment after the 2019 AFC Asian Cup exit has rejuvenated the side tactically, with Oman now having a second and third plan ready. The Dutch tactician has got the team playing mesmerizing attacking football, reminiscent of the Dutch style that puts emphasis on attacking from the wings.

Oman have never qualified for the World Cup and will hope to continue their impressive run of form, enabling them to finally realize the ultimate dream of playing at the biggest stage in football. With the return of goalkeeper Ali Al-Habsi, who has prior Premier League experience under his belt, India’s chances of scoring look diminished. It will take a miraculous performance from the visitors to take anything away from this game.

Pre-Match Press Conference: Igor Stimac: We are here to win against Oman tomorrow

The 4-2-3-1 that Stimac has tried to put in place is finally taking shape, but he still needs to find better options in the midfield to support Brandon. The No. 10 has assisted all goals so far and attempted quite a number of long-rangers against Afghanistan. Halder may have been the sitting defensive midfielder, but needs to provide more with his passing. Sahal, too, needs to find his feet.

Stimac needs to find the right person from his squad to play that third ball after smooth wall-passing from Brandon to Chhetri. Halder wasn’t up to the mark in the last game and the task will be even tougher against Oman. Anirudh Thapa may get a look in to replace Sahal and can be expected to switch roles with Brandon, due to the amount of workload he can shoulder. 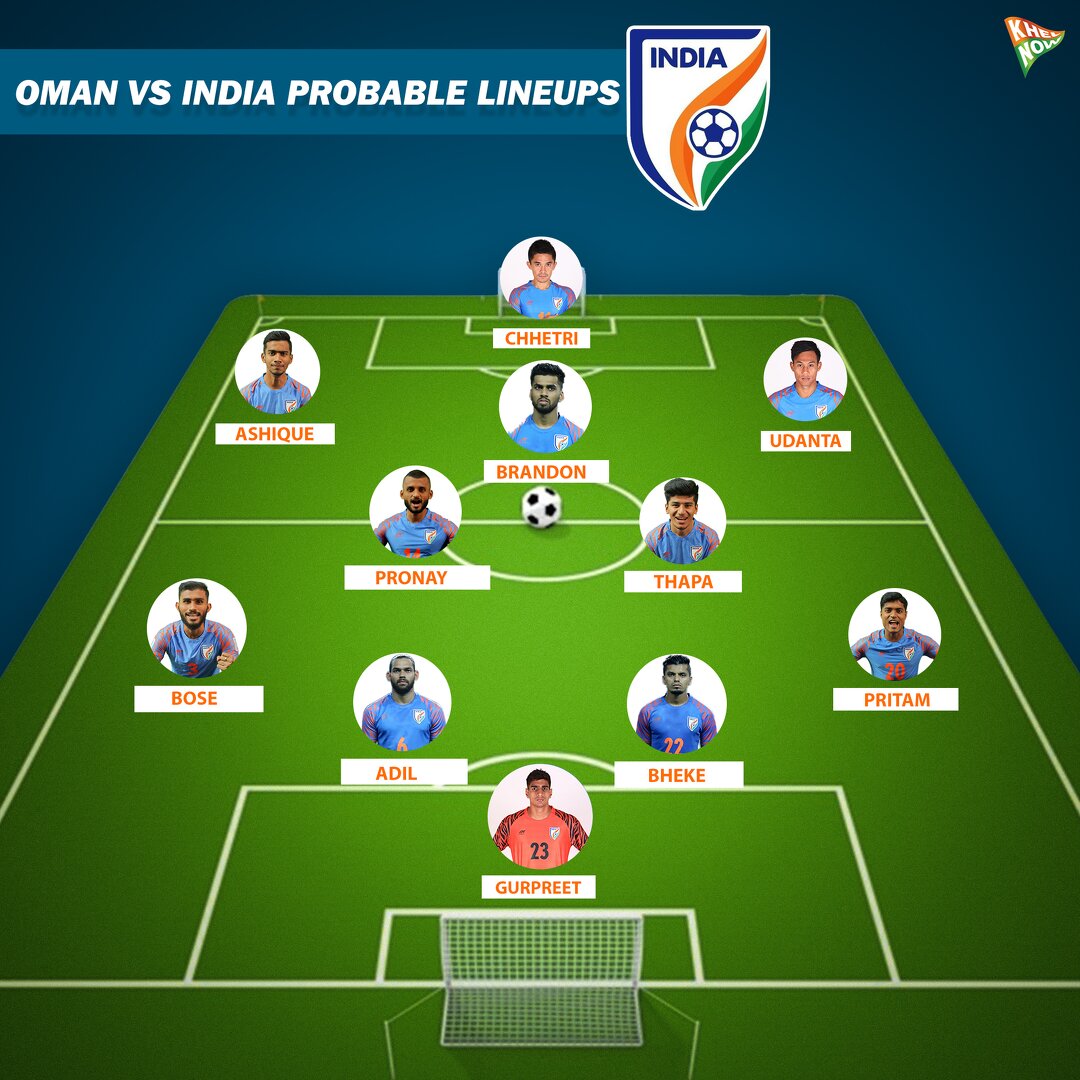 Defensively, India were smooth against Afghanistan, but the challenge against Oman will be more rigid and thus, Subhasish Bose deserves a chance. He’s better defensively and if afforded space, can deliver a neat cross. Spaces must not be left behind the full-backs, because Oman know how to use them well.

In attack, Chhetri must not be used at the top of the team. He must be played wide left, or even behind the striker, if the need arises. His ability to drop deep to help the team against tough opposition is unparalleled and his ability off the ball needs to be used better, to ensure more incisiveness. 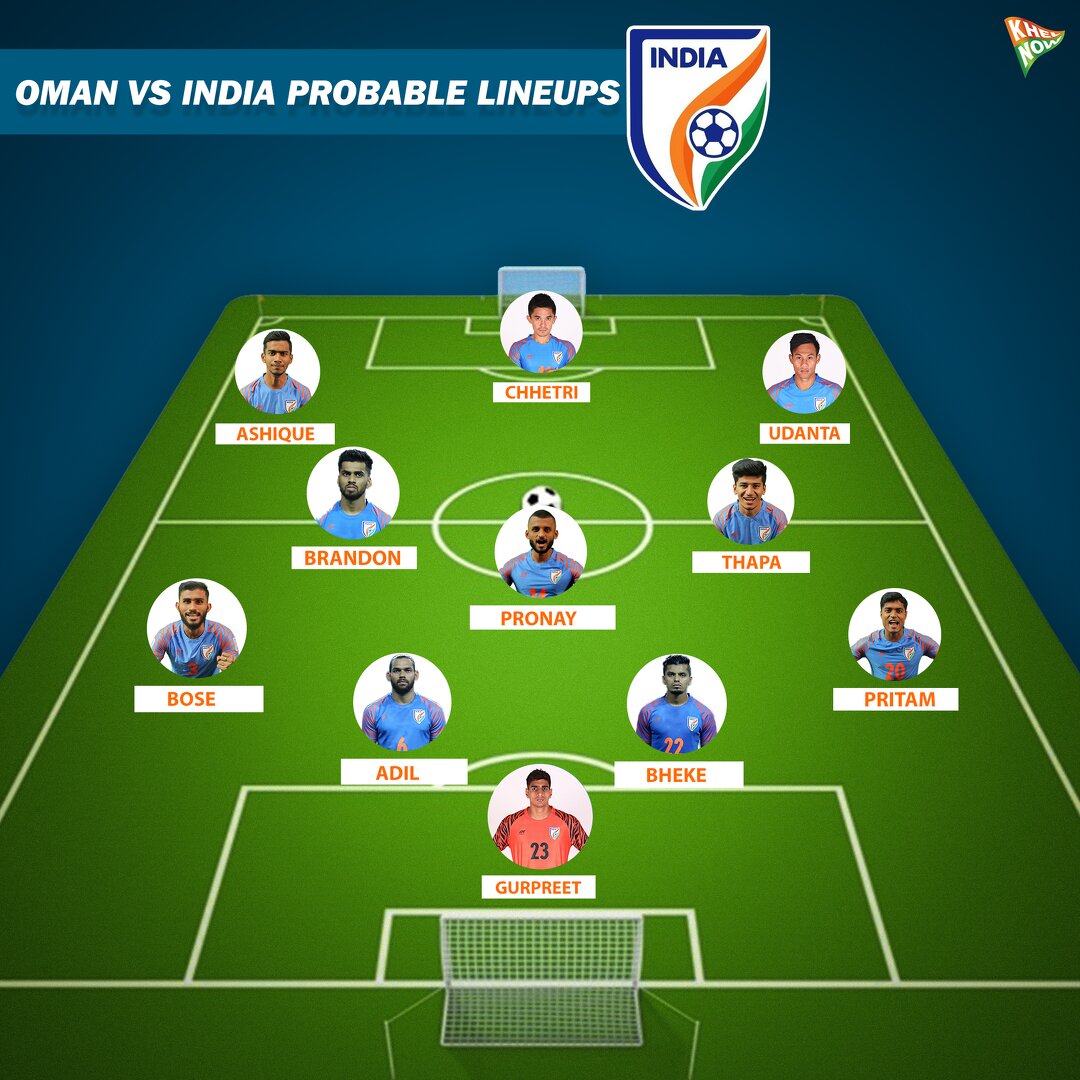 Halder could again start in a 4-3-3, with Brandon and Thapa accompanying him and Ashique Kuruniyan and Udanta Singh starting on the wings. The Bengaluru FC duo needs to get into the game a lot faster than it usually does, to ensure India earn control early into the game. The movement, too, needs to be more diagonal than straight, so that more pressure is built on the opposition box.

Oman employ a 4-2-3-1 lineup, with two holding midfielders providing cover to the backline. The formation transitions into 4-1-3-2 on the attacking front, with Ahmed Kano stepping into the No.10 role, pushing Al-Ghassani into the striker’s position.

Skipper Kano has a free role in midfield and is the orchestrator. He is used efficiently by Koeman to ensure regular supply to his attacking wingers. The tactician emphasizes on wingplay, with his side constantly looking to exploit gaps in the wider channels and overload the box in order to get on the end of crosses. 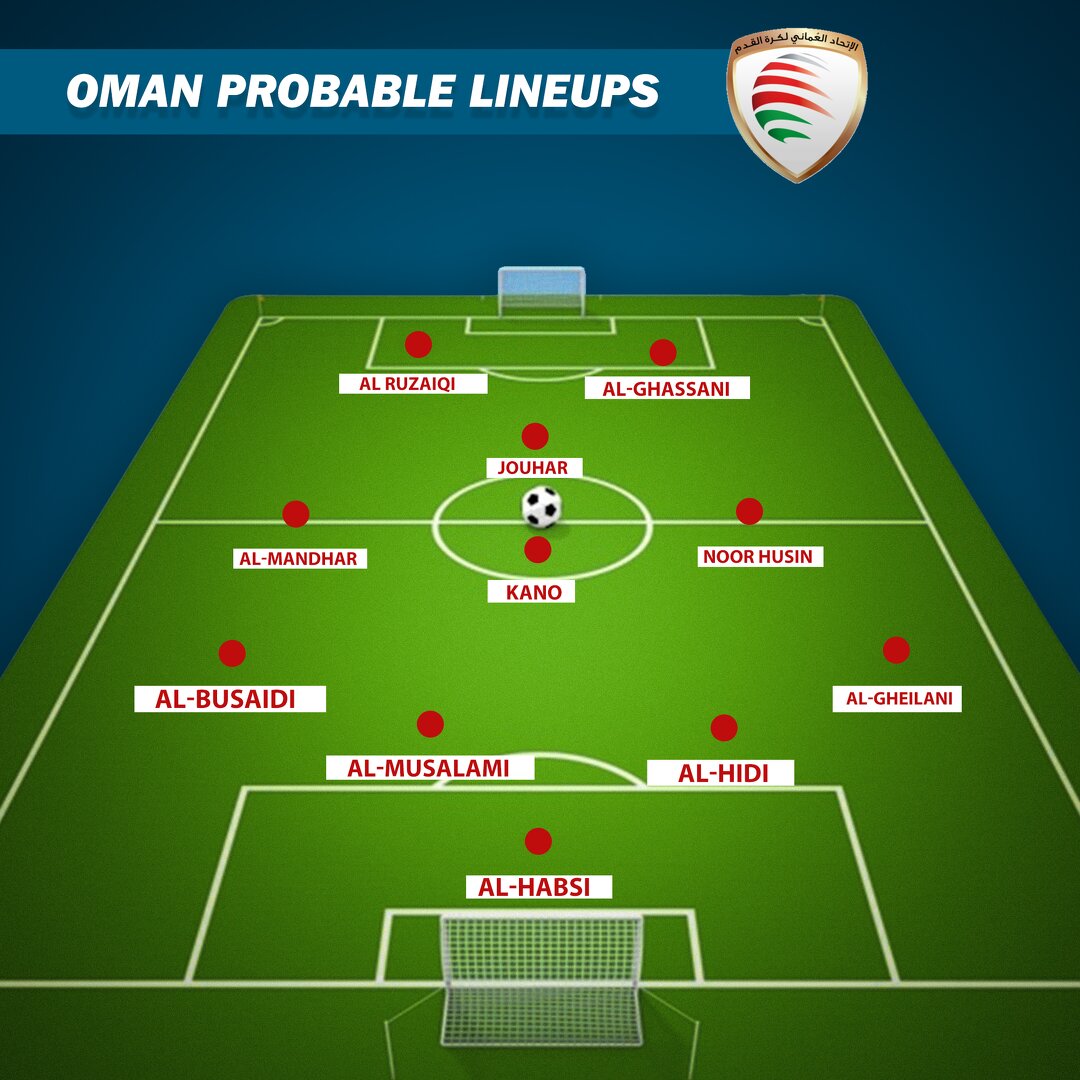 Their set-piece routine is very straightforward, as they push the towering center-backs in order to get on the end of long balls. The two strikers are tactically used, such that one acts as a target man, usually Al-Ghassani, flicking the ball on for his striking partner to get onto the rebounds. Man-marking one of the two forwards should be the go-to tactic here.

Koeman does not hesitate in sacrificing one of the holding midfielders and shifting to a 4-3-3 formation in case the need arises. The backline stays deep with two holding midfielders providing cover, making it tough for the opposition to find space in the final third. Their center-backs are susceptible to errors under high press and rely mainly on the two CDMs to build from the back. Chhetri didn’t score against Bangladesh or Afghanistan, but cometh the hour, cometh the man. India can expect their leading goalscorer of all-time to share the bulk of the creative load and the No. 11 will not disappoint. He hit the post in the last game and came close to scoring against Bangladesh as well. He knows how to rise up to the occasion. Expect a rousing performance from India’s captain, leader, legend.

Rabia Said Al-Mandahar was the difference when Oman visited India and defeated the Blue Tigers in their own backyard thanks to his brace. The attacking winger has been in scintillating form and continued his scoring exploits against Qatar and Bangladesh. He is pacy and loves to exploit the wider channels, causing plenty of problems to the opposition defence. Al-Mandahar is particularly dangerous when cutting in from the left wing.

Indian National Team set to play in the Merdeka Cup

An Oman victory. If India manage to take a point or three from the game, it would be nothing short of a marvel given the Blue Tigers’ current form. For that, the visitors will have to play beyond their means for the entire 90 and more importantly, the second 45. Against Bangladesh too, the home side scored four times in the second half.

The match will be played at the Al-Seeb Stadium in Muscat, Oman from 8:30 PM on Tuesday, November 19 and will be telecast live on the Star Sports Network. It will also be streamed on Hotstar and Jio TV.