This gameweek is crucial as the second international break of the season starts just after this weekend.

It was Pierre-Emerick Aubameyang to the rescue to cancel out Scott McTominay’s opener as Manchester United and Arsenal shared the spoils at Old Trafford. Liverpool FC survived a Sheffield United scare thanks to Wijnaldum’s effort while Chelsea comfortably saw off Brighton. Manchester City pushed the energy up to win against Everton while Spurs too endured a Hugo Lloris nightmare to get all three points against Southampton. It was an average week for the majority of the Fantasy Premier League teams.

A week for the defenders as all three defenders got six points each. While Andrew Robertson and Patrick van Aanholt got clean sheets, Erik Pieters assisted a Burnley goal.

In midfield, John McGinn got eight points while Kevin de Bruyne got nine with Sadio Mane disappointing with only three points. Hamza Choudhury’s late substitute appearance only gave a return of one point.

Captain Tammy Abraham only got four points but Joshua King (12 points) and Harry Kane (8 points) pulled the team up to a more than respectable total. Goalkeeper Lloris got only 3 points.

The team finished well above the average of 51 points.

It is out time for Daniel Ceballos who has been disappointing since his opening game for Arsenal. The Spaniard is replaced along with Hamza Choudhury who looks to have settled for a spot in Brendan Rodgers’ rotation. Wilfred Ndidi is brought in for Choudhury with Jorginho taken in for Ceballos. The Italian is the primary penalty taker for Chelsea and could prove to be a differential over time. 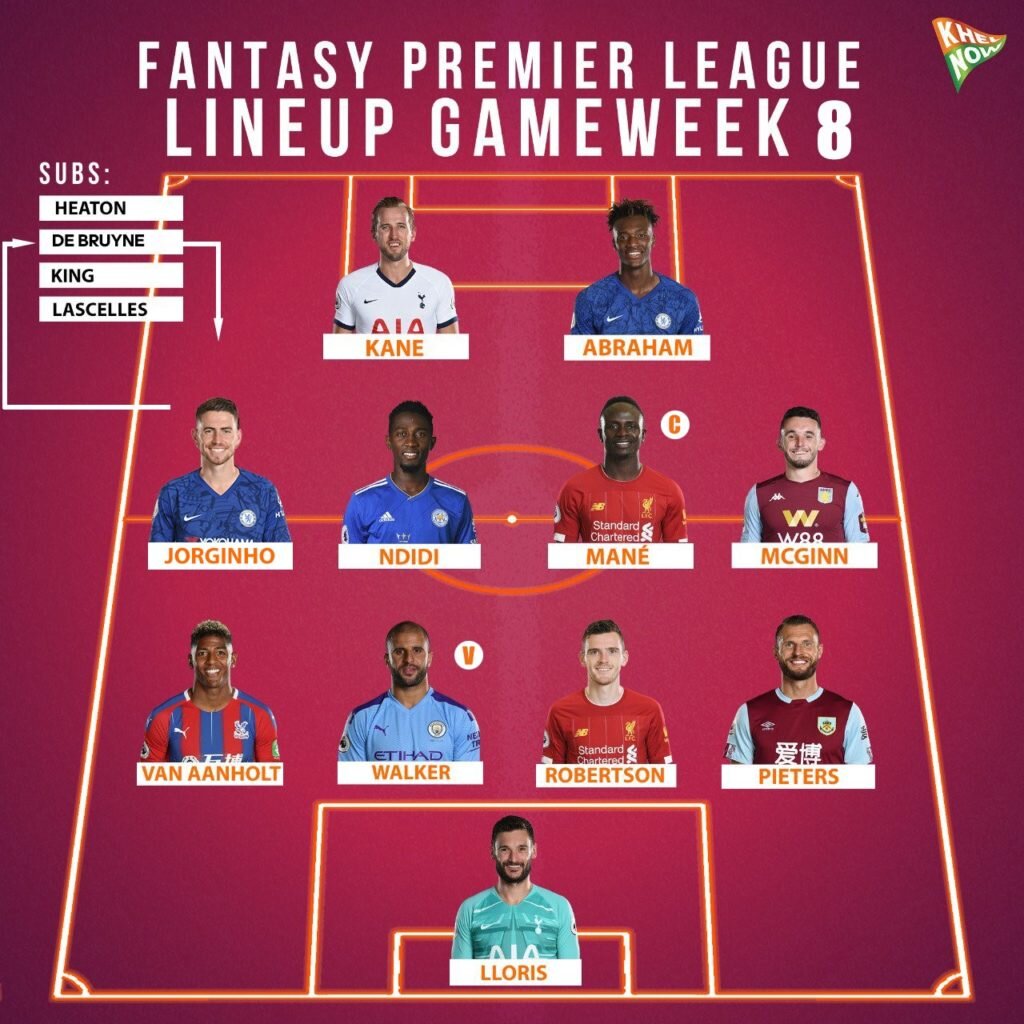 With latest reports coming in about De Bruyne’s exclusion, a late change in the team is necessary

This week, the system used is a 4-4-2. Hugo Lloris gets the nod ahead of Tom Heaton in goal. Kyle Walker comes from the bench to the starting line-up joining Andrew Robertson, Patrick van Aanholt and Erik Pieters. Jamaal Lascelles stays on the bench.

In midfield, new-boy Wilfried Ndidi joins hands with Sadio Mane and John McGinn. It is assured that Kevin de Bruyne will not feature in this gameweek, so Jorginho starts and the Belgian international is benched.

Joshua King moves to the bench with Harry Kane and Tammy Abraham starting. Sadio Mane is the Captian for the week, while Kyle Walker is made the vice-captain.

Liverpool’s solid campaign faces another test in the form of resurgent Leicester City. The Foxes will look to out think the Reds at Anfield while Brighton faces a confused Tottenham at home. Southampton welcome Chelsea while Wolverhampton Wanderers visit Etihad to battle it out against Manchester City. Arsenal and Bournemouth play each other at the Emirates on Sunday while it’s Newcastle away from home for an out of form Manchester United.