There were some decent individual performances that caught the eye in the past week’s action.

Another week’s action in the Indian Super League (ISL) came to a close and the fixtures gave us some memorable performances from both domestic and foreign talents. ATK ensured qualification to the playoffs with a sensational hat-trick from Roy Krishna, while Mumbai City FC secured a crucial late victory against Jamshedpur FC, to keep their qualification hopes alive.

The Indian contingent of players complimented the foreigners and matched them at every step. It was a good week especially for FC Goa, who managed a comfortable victory post-Sergio Lobera’s exit.

Here is the Khel Now ISL team of the week 13:

Gurpreet Singh Sandhu collected yet another clean-sheet for the term, taking his overall tally to 10 for the season. The custodian commanded his area well and seldom looked unsettled. Three saves, five clearances and seven catches topped off a solid all-round performance.

Prabir Das had a fantastic game yet again for ATK. His superb work-rate was one of the highlights of his performance. The marauding full-back attempted five crosses and also was solid when it came to keeping the wingers in check. 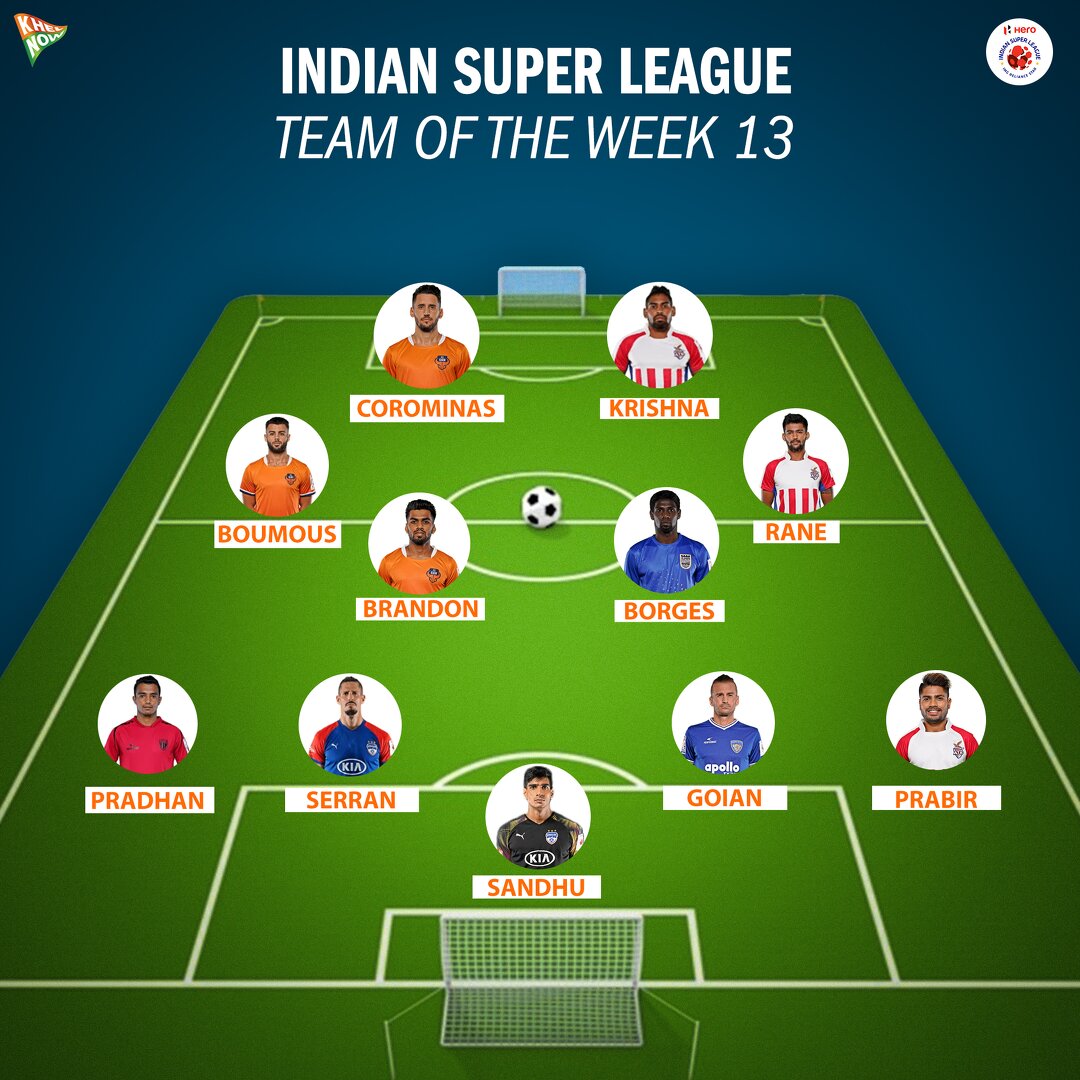 Lucian Goian was, yet again, central to his side when Chennaiyin faced Bengaluru. Although, the Marina Machans had a disappointing result when they drew against the Blues, their leader at the back was the sole reason the outfit were able to keep the visitors at bay. The defender made a total of 21 clearances and was unbeatable when it came to aerial duels as well.

The Blues have been defensively astute this campaign and their centre-back pairing has been a tough nut to crack for any opposition that has come up against them. Albert Serran, paired with Juanan, is a force to reckon with and the Spaniard was again superb, earning yet another clean-sheet. He made 12 clearances and was firm in his tackling as well.

NorthEast United’s fans haven’t had much to celebrate this season, but they can be excited about their left-back Rakesh Pradhan, who has consistently impressed this term and was again on song against Kerala Blasters. The full-back created two good chances and also performed his defensive duties well, making eight crucial clearances and covering spaces behind him well; earning his side a deserved clean-sheet.

Mumbai City FC secured a crucial victory to keep their hopes of qualifying for the playoffs alive and a huge credit for their win goes to Rowlin Borges. The box-to-box midfielder contributed in both attack and defence, as he took a shot, made a few good crosses, while also performing seven tackles and three interceptions. He might be the reliable defensive midfielder India has been in search of.

Brandon Fernandes continued to play a crucial role, as the creative force in the Gaurs’ victory over Hyderabad FC. His passing range and accuracy were on point, as he notched up yet another assist. That takes his tally to six for the season, tied at the top with teammate Hugo Boumous and Rafael Crivellaro of Chennaiyin.

Jayesh Rane has been one of the standout performers as far as Indian players are concerned. He has been the silent workhorse for ATK and does his job well for the tactician. The 26 year-old made one assist, created two direct chances and also contributed in the defence. A brilliant overall performance from the midfielder!

Hugo Boumous is having another sensational season for the Gaurs, being the secret to their success apart from their skipper. He was yet again the driving force behind their recent victory, as he scored a brace and registered one assist. Could have provided more had the attackers pounced on the through balls delivered by the midfielder. Boumous has now scored eight goals and made six assists for FC Goa in the ISL this season.

ISL coaches and their counterparts in world football

Ferran Corominas was again instrumental to his side’s victory after a turbulent week for the club, amidst Sergio Lobera’s shock exit. The skipper managed a quality brace, taking his goals tally for the season to 11; which also helped his team maintain a strong case for the top spot in the points tally.

Picking up on his magnificent form, Roy Krishna was unstoppable for the opposition. He notched up a quick-fire second half hat-trick to end Odisha’s challenge and propel the striker to the top of the ISL’s goal-scoring charts, with 13 goals to his name.