The defending champions have been extremely smart with their summer dealings and this makes them the favourites to the title this time around as well.

Bengaluru FC were far and away the team to beat during the last Indian Super League campaign, but other sides have done well in the transfer market this time around to challenge the Blues for the title.

Carles Cuadrat’s men were comfortable winners at the end of last season, simply maneuvering their way past FC Goa in the final. The coach’s tactics were received well by the players and even better by the fans, instantly making him a favourite among the Bengaluru faithful.

Through this article, you will find out everything you need to know about the defending champions Bengaluru FC, going into what promises to be an exhilarating campaign of Indian football.

Bengaluru FC’s sheer gulf in class, when compared to the rest of the sides, was obvious from Day One and although they did struggle on occasion, it was generally a very comfortable campaign for Sunil Chhetri and Co. After disappointingly losing out to Chennaiyin FC in the final of the 2017-18 campaign, the Blues certainly made their intentions clear right from the opening day last time out.

The Blues’ pre-season has done nothing at all to cast some light on all the doubt currently surrounding the club. With a venue for their home matches yet to be officially announced, the team has only played a couple of low-profile pre-season friendlies to begin with. They started their pre-season campaign by beating Churchill Brothers 3-1 during a fixture held at the JSW Township, Bellary. They further went on to play a match against Gokulam Kerala at the same venue, but ended up losing the game 1-3.

Overall, their pre-season campaign so far has been sketchy to say the least. With no apparent clarity on where they plan to play their home fixtures, they still have one more friendly lined up against Minerva Punjab. Cuadrat will be eager for his team to use this fixture to send a message to the rest of the ISL sides. Positively though, the Blues announced a partnership with Scottish side Rangers; which could turn out to be an extremely fruitful relationship. Former assistant manager Cuadrat has been nothing short of a revelation since taking over the helm from Albert Roca last season. His tactics have worked a charm and he even seems to have an excellent understanding of all the players on offer. Cuadrat’s tactical astuteness and versatility make him one of the most exciting managers in Indian football at the moment.

A former Barcelona C and Barcelona B prospect, Cuadrat is usually seen with two associates at his side in Oriol Lozano and Naushad Moosa and together, they’ve done a fantastic job of maintaining the high level of football that the Blues tend to showcase. Goalkeeping coach Javier Pinillos and fitness coach Mikel Guillén complete the Blues’ current technical team.

Bengaluru FC have retained a lot of their players from the last campaign and this should come as positive news for the faithful, considering they are the defending champions. Key names like goalkeeping extraordinaire Gurpreet Singh Sandhu, Sunil Chhetri and Udanta Singh have been retained.

Over the course of the summer, Bengaluru FC have acquired the services of six players in order to beef up their attempt at title retention. The biggest signing has undoubtedly been the acquisition of exciting young forward Ashique Kuruniyan from FC Pune City. Other signings include Spanish forward Manuel Onwu signed from Murcia and Raphael Augusto, formerly of Chennaiyin.

Eugeneson Lyngdoh has made his return to Bengaluru having been away for a couple of years. The Blues also secured the signing of two exciting youth prospects in goalkeeper Prabhsukhan Singh Gill and midfield destroyer Suresh Singh Wangjam.

The loss of valuable players like Miku Fedor and Xisco Hernández has not affected them too badly because of the presence of mind they’ve shown while utilizing the transfer market.

Alex Barrera, Luisma Villa and Chencho Gyeltshen have all been released with the latter going on to join NEROCA FC on loan. Young winger Bidyananda Singh has also been sold by the Blues and he’s gone on to join Mumbai City FC. Another high-profile departure was that of another pacy winger in Boithang Haokip; who went on to East Bengal. Other than this, Asheer Akhtar, Myron Mendes, Robinson Singh and Altamash Syed were all sold to different teams. This formation could word wonders for Bengaluru FC’s attacking potential

Having the likes of Chhetri, Kuruniyan, Singh and Onwu on the pitch at the same time could produce exhilarating results for the Blues and this is indeed an exciting prospect for fans. Also, the sheer pace that this frontline would contain will be the nightmare of ISL defenders everywhere.

Raphael Augusto and Erik Paartalu are both players adept at playing in the midfield pivot and should excel for the Blues in the middle of the park. The former’s ability to pick out a pass or beat a man when required will certainly complement the combative approach that Paartalu takes up. Dimas Delgado can be a slightly more conservative midfield option as well.

Depending on the situation and the opposition, Cuadrat has the ability to considerably vary his frontline too. With all the new signings in mind, this could be the Blues’ first-choice formation going into the new campaign. 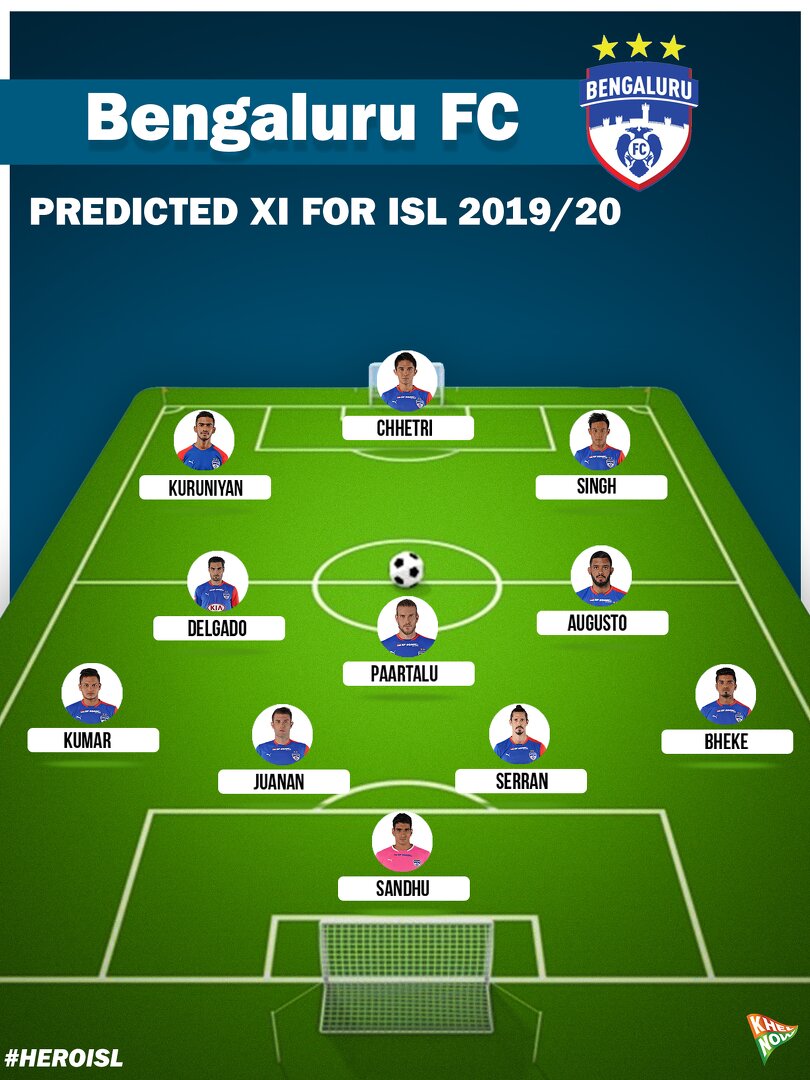 This has been Bengaluru FC’s primary formation under Carles Cuadrat

Undoubtedly Bengaluru FC’s tried and tested footballing formation, Cuadrat is more than likely to utilize his favoured 4-3-3 formation time and again. The defense and goalkeeper are expected to be fairly standard and shouldn’t cause the coach any difficulty at all. This formation would warrant the use of three players laid across midfield.

Although, Chhetri and Udanta Singh are irreplaceable assets on the flanks, the introduction of a young star like Kuruniyan on either side could really make things quite fiery as well.

More than deservedly the captain of the Indian national side, Chhetri has been India’s biggest footballing talent since Baichung Bhutia retired. Bengaluru FC fans will never underestimate just what the diminutive forward is able to bring to the table, as he’s shown us all time and time again. His finishing and dribbling abilities are unparalleled in Indian football and the Blues are lucky to have his services.

Quite possibly the fastest player in all of Indian football, Udanta Singh is a 23-year-old speedster who has been one of the country’s standout performers over the last couple of years. Born in 1996, Udanta has developed into a deadly winger with natural dribbling abilities. His pace on and off the ball, make him nearly impossible to catch once he gets into full flow.

The Australian professional has been one of the Blues’ standout performers over the last few seasons, with his explosive displays in the middle of the park. More than capable of breaking up play and intercepting passes, the midfield destroyer boasts the ability to read passes and opposition movements from miles away. Able to run with the ball and pick out a pass too, Paartalu has been nothing short of a revelation since joining. 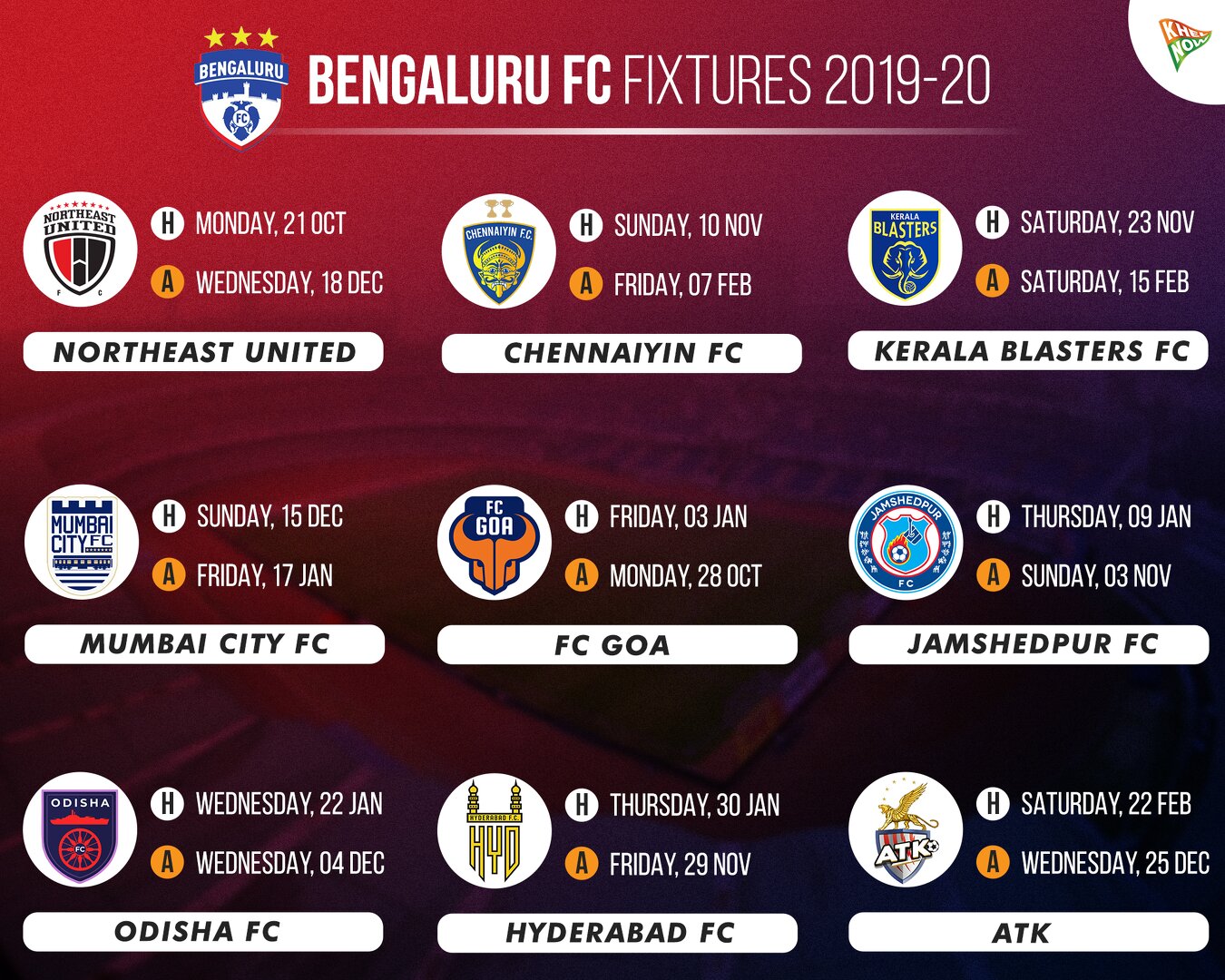 Tickets to all of Bengaluru FC’s games will be available to purchase on Insider.in

Considering that Cuadrat has barely put a step wrong since taking over the helm at Bengaluru FC, the summer signings that he has made have further increased his credibility with the club faithful. The signings of players like Kuruniyan and Lyngdoh further assert the Blues’ positive agenda for the upcoming campaign.

With the ISL trophy currently in possession, Chhetri and Co. will be raring to go ahead of the start of the next campaign. There’s no question about whether or not the Blues will be able to challenge for the title again this year because of the sheer quality of the squad at Cuadrat’s disposal.

All things considered, it would be highly surprising not to see Bengaluru at least take part in the final of the competition, if not win the whole thing once again.