Jamshedpur and Odisha players dominate the our selection this time around.

The second week of the Indian Super League (ISL 2019-20) unfolded with a lot of action, as we saw some of the seasoned players standing up to their task with some youngsters also making their name.

Aridane Santana and David Williams have lived up to expectations and scored goals for their respective teams. Meanwhile, Shubham Sarangi has also proven his worth after his transformation to a defender. Juanan has led the Bengaluru FC backline, with aplomb with his compatriot Tiri also doing the same for Jamshedpur FC.

The best thing about the week was Indian forwards finding the back of the net, with both Farukh Choudhury and Jerry Mawihmingthanga proving their goalscoring prowess.

The veteran has lived up to every expectation for yet another season, as he ages like fine wine. Paul faced nine shots against Bengaluru FC and still walked off the pitch with a clean-sheet. Some of them were simply outstanding reflexes and awareness from the veteran custodian. He was adjudged the Man of the Match, as he single-handedly earned Jamshedpur a point.

He holds the record for the most clean-sheets in the history of the ISL and he’s proving why in every season for the Men of Steel. 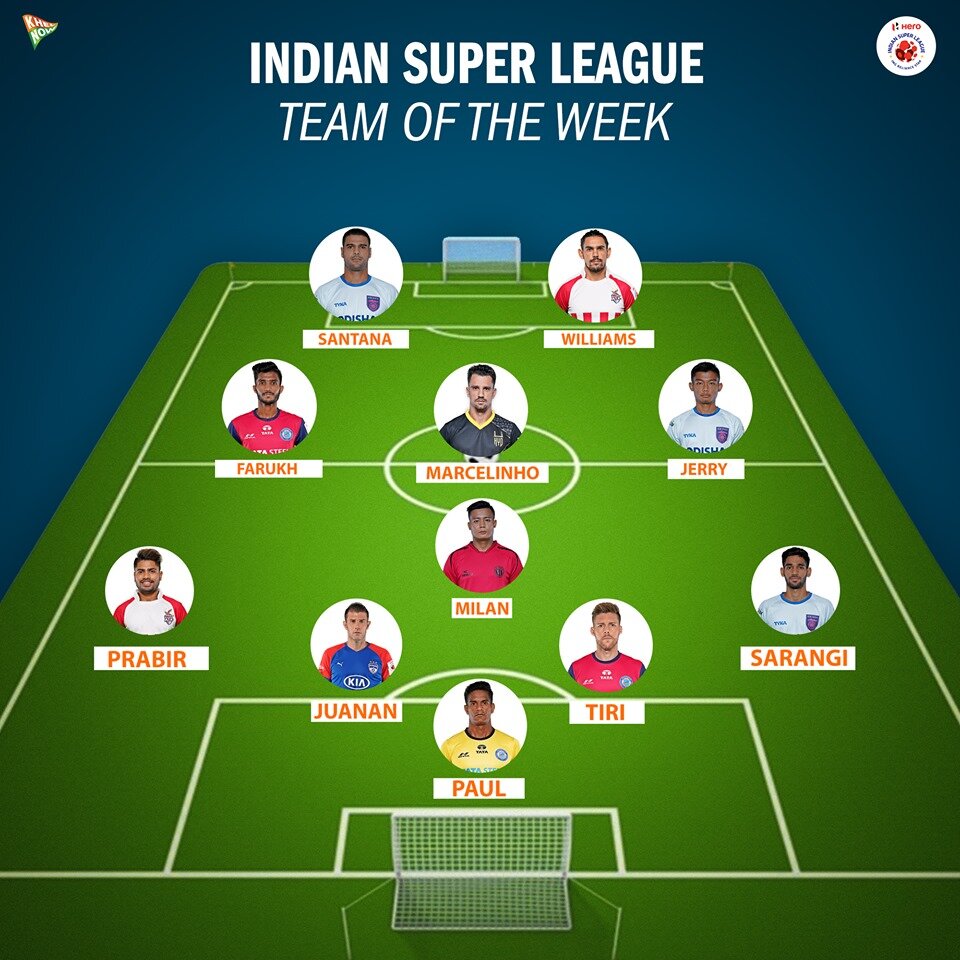 What an evolution it has been for the youngster! From being a forward, this season he has transformed into a full-back. Sarangi was a constant irritation for Mumbai City defenders, as he ventured forward and linked-up well with his fellow wingers.

With 11 tackles and 16 clearances, the 19-year old has been decent defensively. He is slowly getting used to his new position under the tutelage of Josep Gombau.

Probably Bengaluru’s best player this season, Juanan has led the backline with aplomb. Despite a lot of chopping and changing in defence, the experienced Spaniard has marshaled his troops brilliantly.

Juanan kept Ferran Corominas at bay in their match against FC Goa, as the Gaurs only managed to find the back of the net through a spot-kick. He replicated his performance against Jamshedpur as well. Juanan gave no space to Sergio Castel and Farukh Choudhary to manoeuvre the ball in the final third. Bengaluru are yet to concede from open play and most of the credit goes to the 32-year old.

Next up is his compatriot, who has also shown tremendous leadership qualities for the Men of Steel. In back-to-back wins this week, Tiri has been a star player for Antonio Iriondo’s side.

With a staggering 32 clearances, six blocks and as many interceptions, the 28-year-old defender has been very busy. The Men of Steel have only conceded twice this season and a clean-sheet against the reigning champions will definitely boost their morale.

For the second week in a row Prabir Das makes it to the team. It has been a brilliant recovery for the right-back, as he was sidelined for the whole of last season. He has been one of the best players for ATK so far this campaign. Antonio Habas’ decision to use him as a wing-back has given him the license to venture forward and get the best out of himself.

12 tackles from three games speak volumes about his defensive play. However, Prabir’s main weapon is his express pace and exquisite crosses into the box. The man from West Bengal has maintained great balance in his play and helped ATK hold onto a slender lead against Chennaiyin FC.

The new signing for NorthEast United has settled well in midfield. Milan has gradually got going and having played less than 200 minutes this season, he has already registered ten tackles, seven interceptions and four clearances, with a healthy 81.81% passing accuracy rate.

The former Mumbai City man has been instrumental for Robert Jarni’s men, as he has worked tirelessly to recycle possession and break up play for the Highlanders.

The 22-year old was a livewire in Odisha’s maiden win this season against Mumbai City FC. Jerry kept the Mumbai defenders on their toes and his mazy runs often got them in trouble. His assist for Aridane Santana’s goal was the trademark of a proper winger.

Jerry then went ahead a notch and registered his name on the scoresheet. With a goal and three assists, the 22-year old is looking like a great signing for Josep Gombau’s Odisha.

The 32-year Brazilian was instrumental in Hyderabad FC’s maiden win against Kerala Blasters. He scored a 81st minute free-kick goal which handed Phil Brown’s side all three points in their first home match.

The Brazilian has been the source of inspiration for the newcomers this season. Marcelinho has taken eight shots thus far, which proves that if given space the Brazilian can cause havoc against any opposition.

Arguably the best Indian player in ISL 2019-20 so far. Farukh has been a menace for opposition defenders, with Sergio Castel holding up play. The 24-year old has been given the license to have a go at the defenders with his pace. He has also added finishing to his set of skills and the hunger and commitment to score goals or get an assist is clear from the India international.

His stunning bicycle kick which was denied by Gurpreet Singh Sandhu was a testament to the fact that Farukh means business this season. Moreover, head coach Antonio Iriondo has shown faith in the youngster to deliver match-winning performances for the Men of Steel.

Antonio Iriondo: Happy with the young players for their 100% efforts

The Spaniard has led the line for Odisha FC really well, as he used his physicality to good effect and scored a thumping goal, besides providing a great assist in their dominant win over Mumbai City.

The 32-year old has adapted well to Josep Gombau’s system and to new conditions in India. Santana looks like a daunting figure in attack and has also complimented players around him like Xisco Hernandez and Jerry.

ATK’s new recruit has taken the ISL 2019-20 by storm and was also adjudged as the ISL Player of the Month. He has already scored three goals and this week, it was his goal which made the difference against Chennaiyin.

The Australian has shown great adaptability in a new league with his excellent eye for goal. Williams has shown a great work-rate and has a typical attacker’s instinct of being at the right place at the right time.