The final batch of league fixtures of the season saw many domestic and foreign players rise to the fore.

The Indian Super League reached the end of its league phase and the last round of fixtures had several memorable performances and results. Chennaiyin FC came out as victors in a crucial clash against Mumbai City FC in the fight for fourth place in the ISL standings, while Odisha FC and Kerala Blasters were involved in a goalfest.

Hyderabad FC and FC Goa notched up impressive wins as well, with both sides scoring five goals in their respective games.

Various clubs, playing in the lower rungs of the ladder used the opportunity to give their fringe players a chance to impress and they took the opportunity with open arms, with several lesser-known players making a mark for their teams. While the usual suspects continued to impress and made their place in our lineup.

Here is the ISL Team of the Week:

FC Goa have had a reliable figure between the sticks all throughout the season. It was another stable and solid performance Mohammad Nawaz. The custodian notched up his fifth clean-sheet of the campaign and is in form just before the playoffs commence.

Chennaiyin have turned the table on its head and secured playoffs qualification. Laldinliana Renthlei has been exceptional in the last few games, as he continued his exploits against Mumbai City too.

The full-back contributed in keeping a clean-sheet, making nine clearances and seven blocks and also contributed on the attacking front. 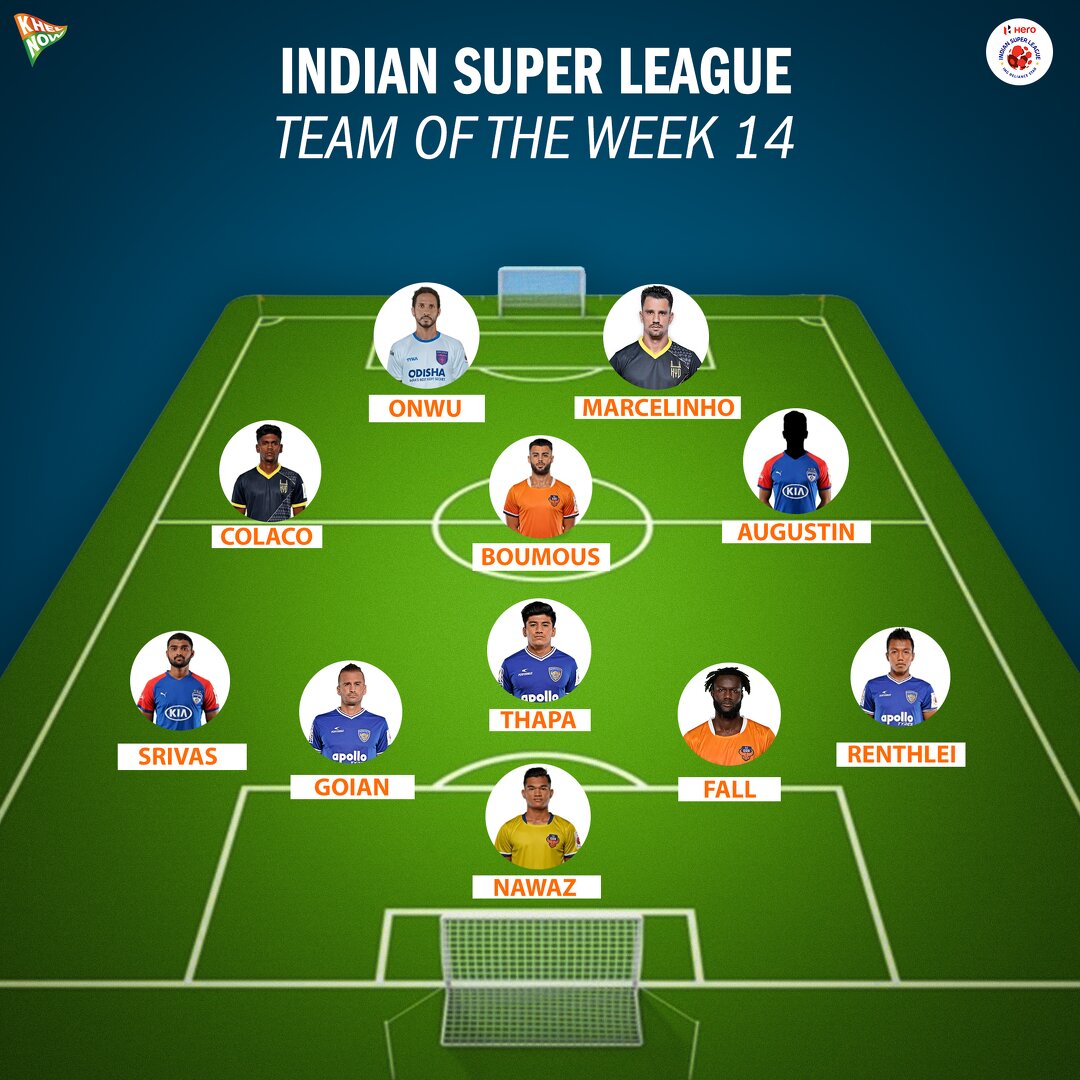 Goa’s ever-present leader at the back, Mourtada Fall not only helped his side keep a clean-sheet, but also got himself on the scoresheet with a powerful header.

It was a memorable yet ironic moment when Mumbai’s former and CFC’s current center-back settled the tie between the two sides vying for the final playoffs spot.

He was unmatched defensively, making 16 clearances, but his most important contribution came in the dying stages of the game when he scored from a brilliant volley.

Parag Srivas was given a surprise start by Carles Cuadrat and the defender took the opportunity well. His defensive work-rate was noticeable and his ambition on the attacking front led to the foul on him, which eventually resulted in the first goal for Bengaluru FC.

Anirudh Thapa continued his scintillating form for the Marina Machans in the middle of the park. He was everywhere, protecting the defensive line and helping in recovering the ball, leading to turnovers and quick counter-attacks.

He made eight clearances, two interceptions and two blocks, apart from having the most touches of the ball.

Udanta Singh was rested by Cuadrat and in his place the nod was given to promising young talent Leon Augustin. The 21-year-old was electric down the right flank and caused plenty of problems to the opposition with his pace and movement.

He contributed with an assist as well for the second goal.

Another young Indian winger who impressed this week was Liston Colaco. The 21-year-old was all over the opposition, as he scored two fabulous goals and assisted another. His attacking contributions further saw him create three more goalscoring chances.

Hugo Boumos has been breathtaking for the Gaurs this season and will give his skipper, Ferran Corominas a run for the Player of the Season award.

The attacking midfielder once again found himself on the scoresheet, as he contributed with two goals and two assists, taking his overall tally for the season to an incredible 11 goals and 10 assists.

Hyderabad ended their campaign with an unusual 5-star performance, decimating NorthEast United. Marcelinho was their star performer as has been the case for most part of the season.

The Brazilian scored two out of the five goals for his side and could have scored more as he had eight shots on target.

Manuel Onwu’s turn of form since changing clubs has to be one of the stories of the season. The Odisha player has been unstoppable since leaving BFC and continued his goalscoring exploits for his new employers with a hat-trick against Kerala Blasters in an eight-goal thriller. He also provided an assist.